(English Author Best Known for His Works: ‘Alice's Adventures in Wonderland’ & Its Sequel ‘Through the Looking-Glass’)

Charles Lutwidge Dodgson, popularly known by his pseudonym, Lewis Carroll, was a renowned English writer, mathematician, and photographer. Brought up in a family of clergymen, he exhibited talent in singing, storytelling and writing poetry from early childhood. He was excellent in academics and graduated with a first class honours in mathematics from Christ Church College, Oxford. He then won the Mathematical Lectureship at Christ Church, a position he held for over 25 years. Carroll shared a very special bond with little children. One of the daughters of the college dean, Alice Liddell convinced him to write the stories he would narrate to them during their outings. Carroll obliged and his manuscript was soon published as ‘Alice’s Adventures in Wonderland’ (1865). The book became a global bestseller in children fiction and earned him worldwide fame. He also took up photography and earned a reputation in the new art form. His subjects were often little children whom he photographed in different costumes and situations. Having juggled various occupations throughout his life, he retired from his teaching profession and photography around 1881. His other famous works are ‘Through the Looking-Glass’ and What Alice Found There’ (1871; a sequel to the first Alice book) and mathematical writings like ‘An Elementary Treatise on Determinants’ (1867) and ‘Curiosa Mathematica’ (1888). He is best remembered for his talent in word play, logic, and child-like fantasy. British People
Novelists
Children's Authors
British Men
University Of Oxford
Childhood & Early Life
Charles Dodgson, better known as Lewis Carroll, was born on 27 January 1832 in the village of Daresbury, England. His family was primarily northern British with some Irish relations. Many men in his family were either army officers or clergy men.
He was the eldest son and the third child in a family of eleven children. His father was an active and conservative priest of the Church of England. When Carroll was eleven years old, his family moved to a spacious church house in North Yorkshire, where they lived for the next 25 years.
As a small boy, Carroll was educated at home. He performed well in mathematics and won many academic prizes. On the other hand, he suffered from a stammering problem that affected his social life.
At the age of twelve, he joined Richmond Grammar School, Yorkshire (1844 - 45). In 1846, he entered the Rugby School where he experienced three years of unhappiness from being bullied. Nevertheless, he continued to excel in academics.
In 1849, he left Rugby to spend a year under his father’s guidance and matriculated at Christ Church College, Oxford on 23 May 1850. The following year, he went into residence as an undergraduate. Shortly thereafter, his mother died at the age of 47.
Though he performed well in college, he was easily distracted and lacked concentration. In 1852, he secured first-class Honours in Mathematics and was nominated to a studentship (scholarship) shortly thereafter.
In 1854, he secured first-class and the first position in the final Honours School of Mathematics, thus graduating Bachelor of Arts. 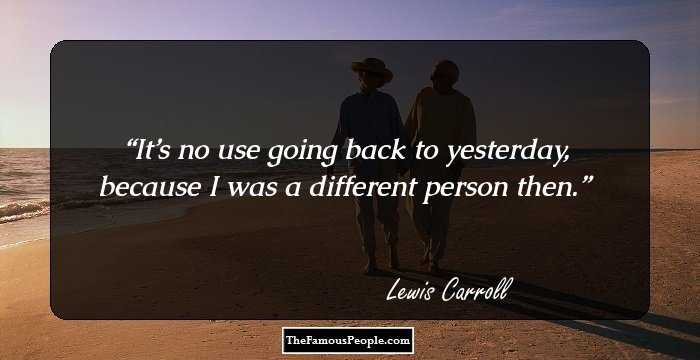 Quotes: I
Continue Reading Below
Teaching Career
Lewis Carroll continued at Christ Church College studying and teaching mathematics. In 1855, he won the Christ Church Mathematical Lectureship, a post he continued to hold for the next 26 years till his resignation in 1881.
He worked primarily in the fields of geometry, linear and matrix algebra, mathematical logic, and recreational mathematics, publishing several books under his real name. He also contributed new ideas in linear algebra, probability, and the study of elections and committees.
After his resignation from the Lecturer post, he served as the curator of the common room (manager of the staff club) at Christ Church College from 1882 to 1892. 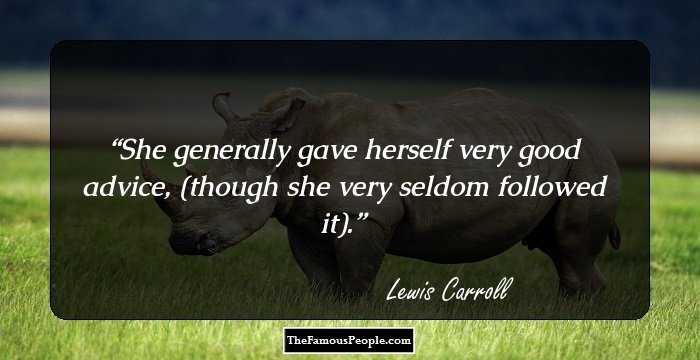 Writing Career
From a young age, Lewis Carroll wrote poetry and short stories. He produced the magazine ‘The Rectory Umbrella’ from 1849 to 1853. In 1845 he had begun composing the magazine ‘Useful and Instructive Poetry’ which was ultimately published after more than a 100 years in 1954.
His work also appeared in national publications like ‘The Comic Times’ and ‘The Train’, and in small magazines like the ‘Whitby Gazette’ and the ‘Oxford Critic’. Most of his writings were humorous and satirical.
In 1856, he first used the pen name “Lewis Carroll” while publishing a romantic poem called ‘Solitude’ in the publication ‘The Train’.
The same year, a new Dean of the college - Henry Liddell arrived at Christ Church with his family. Carroll became good friends with the dean’s children, namely the three sisters Lorina, Edith, and Alice. He spent a lot of time with them, amusing them with his interesting stories.
On Alice’s insistence, he wrote down one such story and presented to her in November 1864 a handwritten, illustrated manuscript called ‘Alice's Adventures under Ground’. The work was finally published by Macmillan Publishers as ‘Alice's Adventures in Wonderland’ in 1865.
Continue Reading Below
The book eventually became a national and global bestseller, and although he began earning a lot of money, he continued with his lecturership position at the college.
Later in 1871, he published the sequel ‘Through the Looking-Glass and What Alice Found There’. In 1876, he published his next great work ‘The Hunting of the Snark’, a fantastical poem.
In 1895, he tried to re-establish himself as a writer again by publishing a two-volume story of the fairy siblings ‘Sylvie and Bruno’. Although it wasn’t as successful as the Alice books, it continued to remain in print for over a century.
Career As A Photographer
Carroll always wanted to become an artist but failing it, he took up photography in 1856, inspired by his uncle Skeffington Lutwidge and friend Reginald Southey. He soon excelled at the art and became a well-known photographer.
His subjects were primarily little children. He photographed them in different costumes and circumstances, eventually making nude studies of them. He shot most of his pictures in the Liddell garden to utilize the natural sunlight.
With his well-known skills in photography, he was popular among higher social circles as well. He made portraits of famous people such as Ellen Terry, Dante Gabriel Rossetti, Michael Faraday, Lord Salisbury, Lord Alfred Tennyson, etc.
He gave up photography all of a sudden in 1880, after mastering the art form for over 24 years. In the face of modernism, the technology he used had become outdated, thus affecting the quality of photographs he produced. 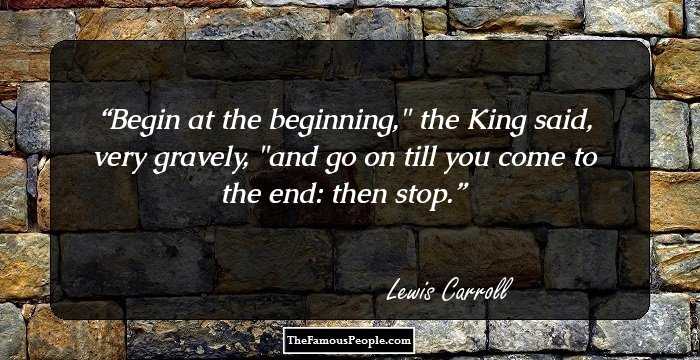 Quotes: You
Inventor & Logician
In 1889, Carroll invented ‘The Wonderland Postage-Stamp Case’ to promote letter writing. He also invented a writing tablet called the nyctograph that allowed users to take notes in the dark if required.
Continue Reading Below
He created a number of popular games such as an early version of the ‘Scrabble’ and the ‘Doublet’, a form of brain-teaser word game.
He also invented a rule to find the day of the week for any date; a way to justify right margins on a typewriter; new systems of parliamentary representation; fair elimination rules for tennis tournaments; a double-sided adhesive strip to shut envelopes; and a device to help bedbound invalids read from a book, among others.
Major Works
The ‘Alice’ series of books comprising ‘Alice’s Adventures in Wonderland’ (1865) and ‘Through the Looking-Glass and What Alice Found There’ (1871) are among the best children’s fiction in the world. They are amusing adventure stories of an intelligent little girl, Alice, who falls through a rabbit hole into a fantasy world inhabited by strange beings. The books are considered to be some of the best examples of the literary nonsense genre.
During his youth Carroll won several prizes for excelling in mathematics. In 1852, he was awarded a first-class honours in Mathematics Moderations and afterwards, a studentship. In 1854, he stood first in his graduation class. A year later in 1855, he won the Mathematical Lectureship at Christ Church, Oxford.
Personal Life & Legacy
In his childhood, Carroll suffered a fever that left him with a deaf ear. At the age of 17, he also suffered a severe attack of whooping cough that resulted in a weak chest. He also stammered which affected his social life.
The studentship at Christ Church College was dependent on remaining unmarried. He was supposed to become a priest, after which he could have married and been appointed to a hamlet by the college. However, he felt unsuitable for parish work and though he briefly thought of marriage, he finally chose bachelorhood.
He was a charming entertainer. He could sing reasonably well and was not afraid to perform before an audience. He was skilled at mimicry, storytelling, and farces as well.
He died of pneumonia following influenza on 14 January 1898 at his sisters' home in Guildford. He was buried at the Mount Cemetery in Guildford.
The Lewis Carroll Children's Library is located on Copenhagen Street in Islington. Also, a memorial stone in his honour is placed in Poets' Corner, Westminster Abbey.
Trivia
The character of ‘Alice’ is believed to be inspired by a small girl Alice Liddell, though the assumption had been denied by the author himself.
According to a special letter register that he created, he wrote and received as many as 98,721 letters. He published his advice about good letter writing in a pamphlet titled ‘Eight or Nine Wise Words About Letter-Writing’.
Recommended Lists:
Writers #48

Quotes By Lewis Carroll | Quote Of The Day | Top 100 Quotes

See the events in life of Lewis Carroll in Chronological Order