Danny Worsnop is a singer-songwriter, best known for his association with rock bands, such as ‘We Are Harlot’ and ‘Asking Alexandria.’ As part of ‘Asking Alexandria,’ Danny and his former band members came up with hit albums that peaked at several music charts in the UK and US. Danny has also worked with various other bands, such as ‘Memphis May Fire,’ ‘The Word Alive,’ ‘I See Stars,’ ‘With One Last Breath,’ and ‘Breathe Carolina.’ Currently focusing on his solo career, he is also associated with ‘We Are Harlot.’ In February 2017, he released his debut solo album, ‘The Long Road Home,’ which was inspired by country music. Danny has had his issues with substance abuse and has also been involved in a couple of controversies. Continue reading to know more about this talented English musician. British People
British Men
Tall Celebrities
Tall Male Celebrities
Male Singers
Childhood & Early Life
Danny Robert Worsnop was born on September 4, 1990 in Beverley, England. He was raised by his parents, Sharon and Philip, and spent his childhood in a small village called Gilberdyke. He was brought up along with his younger sister, Kelly.
Danny was always interested in music. As a toddler, he would create beats using pots and empty boxes. He started playing musical instruments by the time he was eight and even attended violin classes at a young age.
Since he was good at creating music, Danny had no problems learning various other instruments. While attending his violin classes, he also picked up the nuances of playing the trumpet and later found himself playing for his school’s band.
He was influenced by rock and metal music during his teenage years and started learning guitar and bass. Though he initially wanted to serve in the military as a sniper, he changed his mind and continued with his musical journey when his band’s debut album went on to become a massive success.
Continue Reading Below
You May Like

Who Is The Most Popular BTS Member?
Career
Danny Worsnop joined the band ‘Asking Alexandria’ in 2008. He and his band members came up with their official debut album ‘Stand Up and Scream’ in 2009. Produced by Joey Sturgis, the album was released under ‘Victory Records’ and ‘Sumerian Records.’
Though the album did not perform well in the United Kingdom, it did excel in the United States. While it found itself a spot on various music charts across the United States, it claimed the fourth place on ‘Top Heatseekers,’ issued by Billboard magazine.
‘Asking Alexandria’ released its second album titled ‘Reckless and Relentless’ in 2011. The album, released by ‘Sumerian Records,’ broke into the top 10 positions of various music charts across the UK and the US. It also appeared on the ‘Australian Albums Chart,’ where it claimed the 30th spot.
In 2013, the band released its third album ‘From Death to Destiny,’ which claimed the top position on the ‘Top Hard Rock Albums.’ It also performed extremely well in the UK and Australia, handing ‘Asking Alexandria’ its most successful album in terms of monetary gains.
On January 22, 2015, Danny shocked his fans by announcing his dissociation with the band. He stated that he no longer wanted to make heavy music and that the decision was taken after considering what is best for the band. Danny Worsnop was then replaced by Denis Stoff as the band’s main vocalist.
Post his dissociation with ‘Asking Alexandria,’ Danny joined another band named ‘We Are Harlot.’ Danny and his new band members released their debut self-titled album on March 30, 2015, which performed well in the US and UK. Within a week from its release, the album sold more than 5,000 copies in the United States and was also appreciated by the critics.
By now, Danny had started focusing on his solo career and his first solo album. Though he had initially announced that he would be releasing his album in 2011, he had to delay the release due to various reasons.
In 2013, he stated that he was working with Jay Ruston and that the album will be released under ‘Sumerian Records.’ However, the album did not see the light of day for the next three years.
In 2016, Danny released a single from the album, along with a music video. The song, which was titled as ‘I Got Bones,’ was received well by music lovers as it had a nice mix of country music, accompanied by Worsnop’s vocals.
Continue Reading Below
On September 26, 2016, Danny took to his Instagram page and announced that his maiden album, which was previously titled as ‘The Prozac Sessions,’ will be renamed as ‘The Long Road Home’ due to several legal issues. ‘The Long Road Home’ was finally released in February 2017 and was received well by music lovers.
Collaborations
Apart from working with bands like ‘We Are Harlot’ and ‘Asking Alexandria,’ Danny has also collaborated with many other bands. In 2010, he lent his voice for the song ‘Wake the Dead,’ which was part of the metal band, ‘With One Last Breath.’ In the same year, he also collaborated with Bizzy Bone for his song ‘Automatic Rewind’ from the album, ‘Crossroads: 2010.’
In 2012, he collaborated with three bands, namely ‘I See Stars,’ ‘Suicide Silence,’ and ‘Memphis May Fire.’ In 2014, he lent his voice for the song ‘Sellouts,’ which was part of the American duo Breathe Carolina’s hit album, ‘Savages.’ In 2018, he joined hands with the American metal band ‘The Word Alive,’ which featured him in the song ‘Stare At The Sun’ from the album, ‘Violent Noise.’
Other Major Works
In 2015, Danny Worsnop made his acting debut in a film titled ‘What Now,’ which was directed and produced by Ash Avildsen, the owner of ‘Sumerian Records.’ Danny played himself in the film and his acting skills were praised by many.
In the same year, he was cast in ‘Alleluia! The Devil’s Carnival,’ a sequel to the popular short film titled ‘The Devil’s Carnival.’ He played ‘The Smith’ in the film, which was directed by Darren Lynn Bousman, who had directed the film’s prequel in 2012.
Danny has penned down an autobiography titled ‘Am I Insane?’ He is also a photographer and had said in one of his interviews that he would be releasing his works at charity auctions. He sells cool merchandise and clothing on internet.
Controversies
When Danny was associated with ‘Asking Alexandria,’ a fan named Jessica Bruce had claimed that Danny mistreated her and had pushed her friend away when she asked him if she could hug him in one of the band’s live concerts. Jessica took to her social media account and said that she was disgusted by the star vocalist’s attitude.
Danny then took to his official Twitter account and said that Jessica and her friend had misheard him. He also stated that he did not push her friend, and shook her hand instead. Though Jessica went on to accept Danny’s version of the incident, the singer insisted that he would never push his fans away.
Personal Life
Danny has had his issues with alcohol addiction and substance abuse. He had appeared in an inebriated state in a live event by ‘Asking Alexandria’ in 2011. After this incident, Danny sought professional help and started his rehabilitation process.
He is a close friend of Tom Kershaw, a professional tabloid journalist. Danny and Tom studied at the same school and even played musical instruments together for a band called ‘The Element.’
Danny is active on social media as he often posts pictures and videos on platforms like Instagram and Twitter. While his Twitter page has more than 639,000 followers, his Instagram account has more than 179,000 followers.

See the events in life of Danny Worsnop in Chronological Order 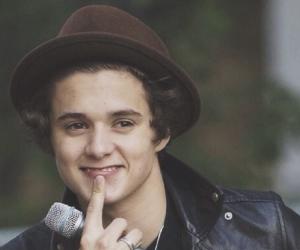