(American Philosopher Known for His Writings on Christian Spiritual Formation)

Dallas Albert Willard was one of the most acclaimed Christian thinkers. An academician and educator, he served as the professor of Philosophy but did not limit his profession to the same. Instead, he specialised his studies in Christian spiritual formation and authored various books for the upliftment of mankind and the society at large. His books, ‘The Divine Conspiracy’ and ‘Renovation of the Heart’ went about to earn the Christianity Today’s Book of the Year Award. A doctorate in philosophy, he came out with various works related to phenomenology in philosophy. In 1965, he started serving as a Professor in Philosophy at the University of Southern California (USC) which he did until his death in 2013. Meanwhile, from 1982 to 1985, he even chaired the position of Director of School of Philosophy at the USC. To know more about his life and profile, read through the following lines. Daniel Dennett
4th September In History
DID WE MISS SOMEONE?
CLICK HERE AND TELL US
WE'LL MAKE SURE
THEY'RE HERE A.S.A.P
Quick Facts

American Celebrities
American Men
Male Philosophers
American Philosophers
American Intellectuals & Academics
Childhood & Early Life
Not much is known about Dallas Willard’s parents or his childhood life other than the fact that he was born at Buffalo, Missouri, US on September 4, 1935.
Young Willard completed his preliminary education from William Jewell College before moving to Tennessee Temple College to complete his undergraduate studies. He graduated with a Bachelor’s degree in psychology in 1956.
The following year, he attained his BA in Philosophy and Religion from the Baylor University. Later on, he attended the graduate school at Baylor University and University of Wisconsin-Madison to earn his PhD. He completed his PhD in Philosophy in 1964 with a minor in History of Science. 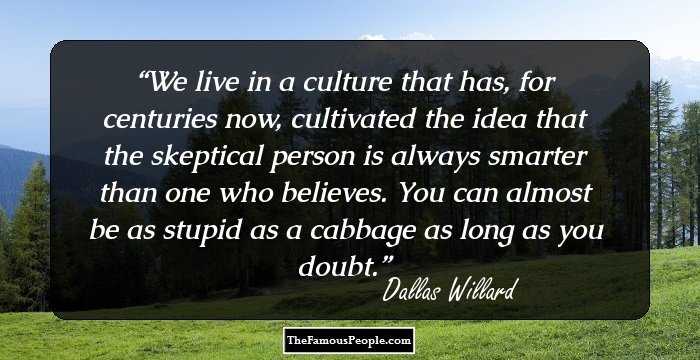 Quotes: You, Culture
Continue Reading Below
Career
At the time of attaining his PhD from the University of Winconsin-Madison, he took up a teaching position therein and continued to serve in the profile for five years, from 1961 to 1965.
In 1965, he took up the position of Professor in the School of Philosophy at the University of Southern California in Los Angeles. His brilliance at training and complete know-how of the subject turned profitable for both him and the institution.
No sooner than in 1982, he was made Director of the School of Philosophy, a position which he held unto 1985. Meanwhile, he also served as the visiting professor at UCLA in 1969 and at the University of Colorado in 1984.
During this time, he published various publications about philosophy. Most of them centred around epistemology and philosophy of mind and of logic. He even jotted the philosophy of Edmund Husserl and translated the latter’s work from German to English.
He had such a hold of Edmund Husserl’s work that he was widely regarded as the international authority on the latter’s work. In his lifetime, he came up with two translations of the work by Husserl; one in 1993 by the title, ‘Philosophy of Logic and Mathematics’ and in 2003, ‘Philosophy of Arithmetic’
Other than teaching and writing works on philosophy, he penned numerous books and gave lectures about Christianity and Christian living. His first book in the same release in the 1988 under the title, ‘The Spirit of the Disciples: Understanding How God Changes Lives’.
His ground-breaking work was published in 1998 under the title, ‘The Divine Conspiracy: Rediscovering Our Hidden Life in God’. The book highlighted the changes that human society required in the way people looked at life and their beliefs.
What made ‘The Divine Conspiracy’ a bestseller was that it not only featured biblical references but included aspects of the popular culture, science, scholarship and spiritual practices. It gave a deep, embedded meaning of Christ’s teachings in a way that was novel and fresh and acceptable for humans.
In 1999, the book was bestowed with the Christianity Today’s Book of the Year award. Same year, he released yet another book on Christian living titled, ‘Hearing God: Developing a Conversational Relationship with God’. He stressed on conversing with God in such a way that we are able to listen intently and understand what God is trying to say.
Continue Reading Below
In 2002, he came up with the book, ‘Renovation of the Heart: Putting on the Character of Christ’. The book dealt with the transformation of the human spirit, in which humans need to get rid of their sinful habits and be one with God. The book went on to be awarded with the Christianity Today’s 2003 Book Award for Books on Spirituality.
He was of the belief that lack of activeness and responsiveness of the Church to be one of the problems due to which the society faced crisis. He stressed on the fact that one need to deliberately choose to be disciple of Christ and learn the things that would help enhance the virtue of love, joy, peace, patience, kindness and faithfulness 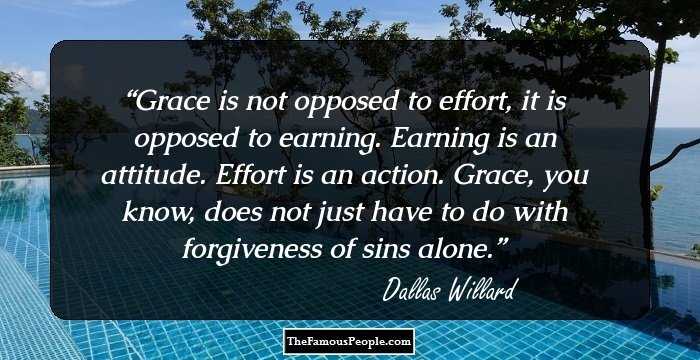 Quotes: You, Alone
Awards & Achievements
From 1965 to 1977, he served as a Danforth Associate
In 1976, he was felicitated with the Blue Key National Honor Fraternity's ‘Outstanding Faculty Member’ award for outstanding contributions to student life at USC
He was presented with the prestigious USC Associated Award for Excellence in Teaching for 1976-77. In the summer of 1977, he was one of the faculty participants in the COLLEGIUM PHAENOMENOLOGICUM at Monteripido.
In 1984, he was conferred with the USC Student Senate Award in the category of Outstanding Faculty of the Year
In 1990, he served as the lecturer in Corsi Estivi Internazionali di Filosofia, Bozen, Italy. Same year, he was signed up as a member of the PHI KAPPA PHI National Honor Society
In 1991, he was initiated into the ALPHA LAMBDA DELTA National Honor Society
Personal Life & Legacy
He tied the nuptial knot with Jane Lakes of Macon, Georgia in 1955. The couple was blessed with two children, John and Becky.
He breathed his last on May 8, 2013, after suffering from cancer. 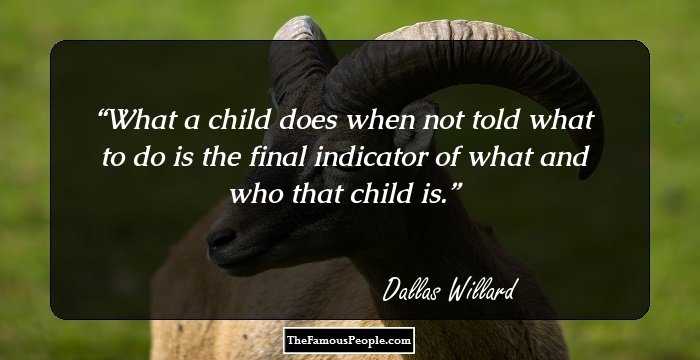 Trivia
An American philosopher, he is known to the world for his writings on Christian spiritual formation and for acting as the author of the books, ‘The Divine Conspiracy’ and ‘Renovation of the Heart’

Quotes By Dallas Willard | Quote Of The Day | Top 100 Quotes

See the events in life of Dallas Willard in Chronological Order