(Best Known for Her Novel 'Gigi')

Sidonie-Gabrielle Colette, more popularly known Colette, was a French writer, stage actress, and journalist who was nominated for the Nobel Prize in Literature in 1948. Colette’s early career as a writer was hidden behind the shadow of her husband as she was made to write under his name. Her ‘Claudine’ novels in the early 1900s were a huge hit, but she didn’t receive her due credit. After her separation with her first husband, Colette was denied any royalties from her successful books. She started working as a stage actress to earn her keep and performed all over France. Despite this, she didn’t let her writing career suffer and continued producing popular novels. During the First World War, she also worked as a journalist and amateur photographer and regularly wrote articles and short stories for Le Matin. Her most productive years were in the 1920s, when she wrote over seven novels and was involved in their film adaptations, too. Her most popular novels ‘Gigi’ and ‘Cheri’ have been adapted to the screen several times. Colette continues to hold her sway even after her death, and many regard her as the greatest French writer. She was made the Grand Officer of the Légion d'honneur in 1953 in recognition of her contributions during World War 1. Alexandre Dumas
DID WE MISS SOMEONE?
CLICK HERE AND TELL US
WE'LL MAKE SURE
THEY'RE HERE A.S.A.P
Quick Facts

French Celebrities
French Women
Women Writers
French Writers
Aquarius Writers
Childhood & Early Life
Sidonie-Gabrielle Colette was born on January 28, 1873 in the village of Saint Sauveur-en-Puisaye near Burgundy in France. Her father Jules-Joseph Colette was a tax collector and a war hero, while her mother Adele Eugenie Sidonie was a homemaker.
She spent her early years in Yonne; owing to her family’s declining income, she studied at a public school. 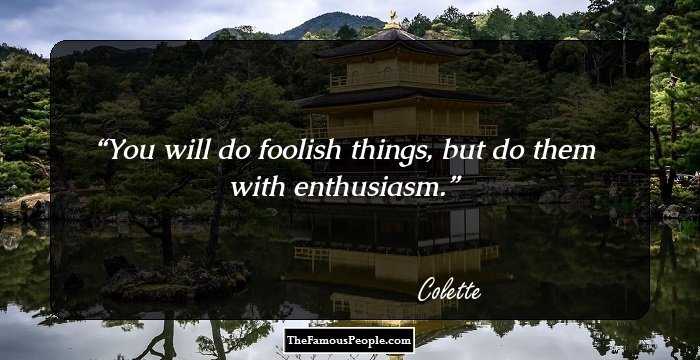 Quotes: You, Will
Continue Reading Below
Early Career
Colette started writing from a young age. Initially, her first four novels ‘Claudine à l'école’ (1900), ‘Claudine à Paris’ (1901), ‘Claudine en ménage’ (1902), and ‘Claudine s'en va’ (1903) were published under her husband’s name. These novels were mostly autobiographical in nature.
Her husband encouraged her writing and artistic abilities and even encouraged her dalliances with women. Colette attributes her husband’s persistence as the main factor in her career as a writer.
Her other books from the period include ‘Dialogues de bêtes’ (1904), ‘La Retraite sentimentale’ (1907), ‘Les Vrilles de la vigne’ (1908). Despite the camaraderie she shared with her husband, the books continued to be published under his name and she didn’t gain any wealth or fame. 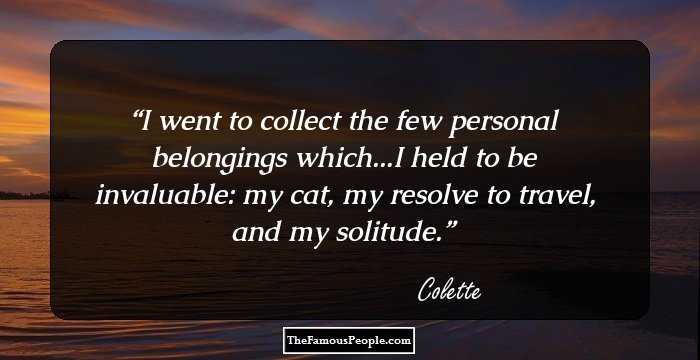 Quotes: I
Later Career
Colette’s separation from her husband left her with meagre income as the copyright still belonged to her husband. Finally, in 1912, she embarked on a stage career in music halls. Despite performing all over France, she didn’t earn well and barely survived.
Colette spoke about her struggling years in ‘La Vagabonde’, which was published in 1910. The book extensively focuses on women’s independence in a male society. She later published ‘L'Envers du music hall’ (1913), ‘L'Entrave’ (1913), ‘La Paix chez les bêtes’ (1916), ‘L'Enfant et les sortilèges’ (1917), and ‘Mitsou’ (1919).
During her second marriage to the editor of Le Matin, she shifted to journalism, writing on theatre and later focused on short stories. In particular, she covered the World War (as a journalist. she was the first woman to report from the front lines). This marriage also allowed her to devote herself to writing and amateur photography.
Her biggest hit came in 1920 with the release of her novel ‘Cheri’, which narrated the love between an older woman and a younger man. This established her as a writer, and she could hold her own with the audience.
She followed ‘Cheri’ with many other hits. Her works in that decade include ‘La Maison de Claudine’ (1922), ‘L'Autre Femme’ (1922), ‘Le Blé en herbe’ (1923), ‘La Fin de Chéri’ (1926), ‘La Naissance du jour’ (1928), ‘Sido’ (1929), and ‘La Seconde’ (1929).
Continue Reading Below
She also dabbled as a screenwriter for two movies that were based on her novels. In 1934, she worked on the dialogue for ‘Lake of Ladies’ directed by Marc Allegret. In 1935, she was a part of ‘Divine’, directed by Max Ophuls.
At the end of the decade, Colette was often said to be France’s greatest female writer. Her books often criticized the conventional lives of women and instigated revolution in their manner of living. Despite a decrease in her writing output, her influence was generously remembered.
Colette’s later years were dotted with a variety of activities, including screenwriting. In the 1930s, she published ‘Le Pur et l'Impur’ (1932), ‘La Chatte’ (1933), and ‘Duo’ (1934).
In the 1940s, she continued working on her writing. She published ‘Julie de Carneilhan’ (1941), ‘Le Kepi’ (1943), ‘Gigi’ (1944), ‘L'Étoile Vesper’ (1947), and ‘Le Fanal Bleu’ (1949). ‘Gigi’ continues to remain her most-remembered novel till date, and it was made into a film and later adapted on stage and finally into a Hollywood musical.
In 1948, on account of her contributions to French Literature, she was nominated for the Nobel Prize in Literature by Claude Farrere.
Toward the beginning of the 1950s, Colette’s writings were rapidly adapted to the screen and were often major hits. She mostly relegated to writing memoirs and her final work ‘Paradis terrestre’ was published in 1953.
Today, Colette is fondly remembered for her groundbreaking and erotic themes that were rife in her novels. Her candor with sexuality and homosexual relations paved the way for many other writers to write boldly and take up the mantle of truth.
Major Works
Among her many popular novels, Colette’s biggest hits were the one-word novels ‘Cheri’ (1920) and ‘Gigi’ (1944). Both novels focus on intimate relationships between men and women and are erotically charged. They have also been adapted to the stage and film. 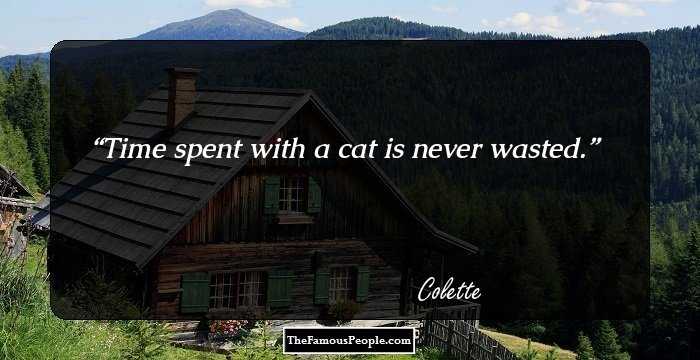 Quotes: Never, Time
Awards & Achievements
Colette was elected to the Belgian Royal Academy in 1935 and was later selected as the President of the Académie Goncourt in 1949.
She was awarded the Grand Officer of the Légion d'honneur in 1953.
Family & Personal Life
Colette married the much-older writer Henry Gauthier-Villars in 1893. Despite a steady marriage, his inability to write and his insistence on using Colette’s work in his own name caused a strain in the relationship. The couple split in 1906 with the divorce finalized in 1910.
She married Henry de Jouvenel des Ursins, the editor in chief of Le Matin in December 1912. The couple had a daughter (5) Colette de Jouvenel , who was born in July 1913. The couple eventually divorced owing to several infidelities in (6) 1924.
In 1925, she married Maurice Goudeket, a businessman and French writer. She lived with him and nursed him until her death.
Apart from three formal marriages, Colette’s personal relationships that were homosexual in nature were the talk of the town. Her relationship with Mathilde de Morny, the Marquise de Belbeuf, during her struggling years is particularly well-known.
Many artists have paid tribute to Colette. The singer, Rosanne Cash. spoke of her in the song ‘The Summer I Read Colette’ and Truman Capote wrote a short story about her titled ‘The White Rose’.
Colette died on August 3, 1954 at the age of 81 in her apartment at the Palais Royal, Paris. She was not allowed a religious funeral by the Catholic Church on account of her divorces. However, she was honored with the state funeral and later interred in Père-Lachaise cemetery.

See the events in life of Colette in Chronological Order