(President of the Republic of China)

Advanced Search
Chiang Kai-shek was a Chinese political leader who served as the leader of the Republic of China for almost five decades. Also known as Chiang Chung-cheng and Chiang Chieh-shih, he was an influential member of the Kuomintang (KMT), the Chinese Nationalist Party. Born in China during the rule of the Qing dynasty, he joined military training college in Japan as a teenager. He served for a while in the Japanese army during the course of which he started developing revolutionary ideas. Upon his return to China, he became actively involved in the uprising that overthrew the Qing Dynasty and established a Chinese republic. He eventually joined the Chinese Nationalist Party (known as the Kuomintang or KMT), founded by Sun Yat-sen and became a close ally of Sun. He rose through the ranks and served as the Commandant of the Kuomintang's Whampoa Military Academy. Upon Sun’s death in 1925 Chiang succeeded as the party’s leader and led the suppression of the Chinese Communist Party. Over the years he became a very powerful political leader and gained much international prominence in the late 1930s. Following the civil war in 1946 in which KMT was defeated by the Communists, Chiang moved to Taiwan where he established a government in exile. Cao Cao
DID WE MISS SOMEONE?
CLICK HERE AND TELL US
WE'LL MAKE SURE
THEY'RE HERE A.S.A.P
Quick Facts

Chinese Celebrities
Revolutionaries
Political Leaders
Chinese Men
Male Leaders
Childhood & Early Life
Chiang was born on October 31, 1887, in Fenghua, Zhejiang, Qing dynasty. His father Jiang Zhaocong and mother Wang Caiyu were from a fairly prosperous family of salt merchants. His father died when Chiang was only eight years old.
He grew up at a time when China was in the throes of a political turmoil amidst the civil wars among warlords.
Chiang decided to pursue a military career. First, he enrolled at the Baoding Military Academy in North China in 1906 before moving to the Tokyo Shinbu Gakko, an Imperial Japanese Army Academy Preparatory School for Chinese students, in 1907.
He met several compatriots in Japan who influenced him with their revolutionary thoughts and inspired him to support the revolutionary movement in their homeland to overthrow the Qing Dynasty and to set up a Chinese republic.
Chiang served in the Imperial Japanese Army from 1909 to 1911. 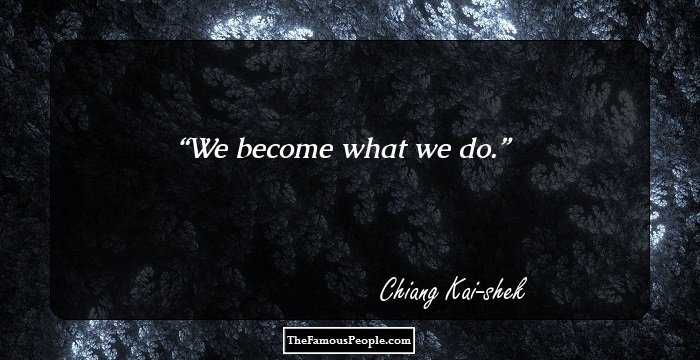 Continue Reading Below
Later Years
Chiang returned to China in 1911 and took part in the uprisings that led to the overthrow of the Qing Dynasty and established a Chinese republic. He then joined the other revolutionaries in 1913–16 in the struggles against China’s new president, Yuan Shikai.
He joined the Chinese Nationalist Party (known as the Kuomintang or KMT), founded by Sun Yat-sen and became a close comrade of Sun with whose support he was appointed commandant of the Whampoa Military Academy in Canton in 1924. There he started working on the creation of the Nationalist army.
Sun died in 1925 and Chiang became leader of the KMT. Over the next few years he led the Northern Expedition which reunified most of China under a National Government and played a major role in the suppression of the Chinese Communist Party in 1928.
The decade from 1927 to 1937 was a period of relative peace in spite of the ongoing Chinese Civil War. Even though this decade was marked by warfare between militarists, Nationalists, Communists, and Japanese invaders, the years also saw the strengthening of the Nationalist government. With the help of German advisers, Chiang built a modern army and set up a formidable military machine.
In July 1937, the Second Sino-Japanese War broke out and by August, Chiang had sent 600,000 well-trained soldiers to defend Shanghai. China however lost over 200,000 of the soldiers.
The heavy fighting continued for years and then the United States came into the war against Japan in 1941, and joined China as an ally. The Japanese finally surrendered to the United States in 1945. However by this time Chiang’s government was showing signs of internal decay and was ill-equipped to reassert its authority in formerly Japanese-occupied China. The KMT’s incapability saw a major portion of the countryside going into Communist control.
In 1946 civil war broke out between the KMT and the Communists. After three years of war, the Communists emerged victorious and established the People’s Republic of China in 1949.
Chiang, along with the remaining members of the KMT left mainland China and went to Taiwan. He moved the government to Taipei, and formally resumed duties as President of the Republic of China on March 1, 1950. He was reelected as the president four more times (1954, 1960, 1966, and 1972). This government was recognized by many countries as the legitimate government of China. 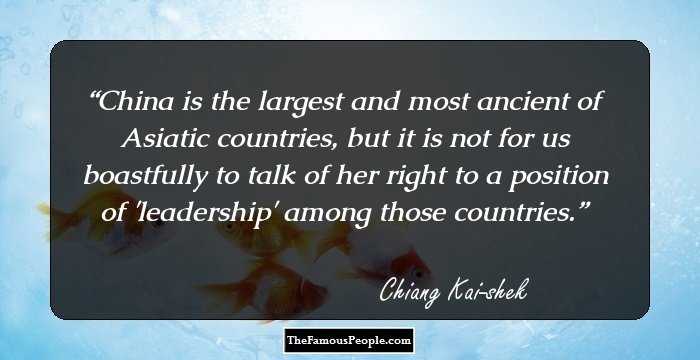 Awards & Achievements
Chiang Kai-shek was honored with the Order of National Glory, the highest military award of the Republic of China Armed Forces, the army of the Republic of China.
He was awarded the Order of Blue Sky and White Sun with Grand Cordon for "outstanding contributions to national security under foreign invasion".
Personal Life & Legacy
Chiang Kai-shek was married four times. His first marriage was to Mao Fumei who died in the Second Sino-Japanese War during a bombardment. This marriage produced one son, Chiang Ching-kuo. His second and third wives were Yao Yecheng and Chen Jieru respectively. His fourth and best known wife was Soong May-ling who played a prominent role in the politics of the Republic of China.
He suffered from various ailments during the last years of his life. His aging body was further weakened by a heart attack and renal failure in the months preceding his death. He succumbed to his illnesses on April 5, 1975, at the age of 87. Chiang was succeeded as President by Vice President Yen Chia-kan and as Kuomintang party leader by his son Chiang Ching-kuo. 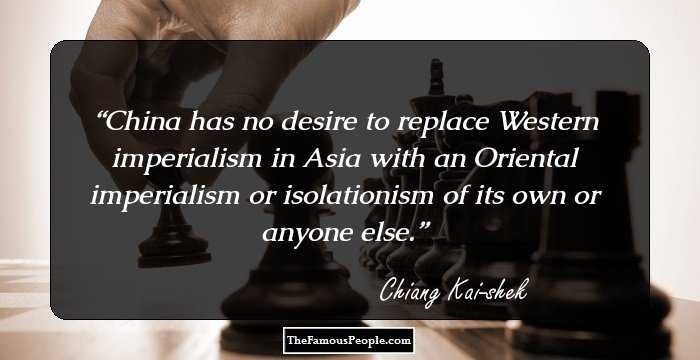