(Father of the computer)

Charles Babbage, a brilliant polymath, is remembered today as the first man to build a computing machine. He helped found the Astronomical Society and came to be interested in creating a calculating machine. He built a small machine that could compute squares. This helped him acquire funds from the British government for the Difference Engine, but it could not be completed. In his second attempt, he designed a more complicated machine called the Analytical Engine, which was programmed using punched cards. Apart from this computing machine, his brilliant mind achieved more. His study of electrodynamics was referred to by Michael Faraday. He designed an open submarine in which four people could survive for a couple of days. He could decode the Vigenère's auto key cipher, but was forced to keep his achievement under wraps due to the Crimean War. He invented the pilot fixed to locomotives to clear the tracks, and the dynamometer which kept track of the locomotive's progress. He was a Lucasian Professor of Mathematics at Cambridge for over a decade. He was one of the first to write about operational research. The ‘Babbage Principle’ developed the division of labor according to the skill of the laborer. His views on Creation supported natural law, and distanced the scriptures from it. James Dyson
DID WE MISS SOMEONE?
CLICK HERE AND TELL US
WE'LL MAKE SURE
THEY'RE HERE A.S.A.P
Quick Facts

British People
Computer Scientists
British Men
Trinity College, Cambridge
Male Scientists
Childhood & Early Life
Charles was one of the four children born to Benjamin Babbage, a banking partner in Praed's & Co and the owner of the Bitton Estate in Teignmouth, and Betsy Plumleigh Babbage.
At eight, he was sent to a country school in Alpington in order to recover from a life-threatening fever.
He joined King Edward VI Grammar School in South Devon, and then Holmwood academy, in Middlesex, under the Reverend Stephen Freeman. The school library inspired love for mathematics in him.
He left the academy to be taught by two private tutors - a clergyman from Cambridge from whom he did not learn much, and the other an Oxford tutor who taught him the Classics.
He joined the Trinity College, Cambridge, in 1810. He and his friends formed the Analytical Society, the Ghost Club that investigated paranormal occurrences, and the Extractors Club to free members of mental asylums.
In 1812, he shifted to Peterhouse, Cambridge and as the best mathematician there, he received a degree without examination, two years later. He had defended a controversial thesis in a debate. 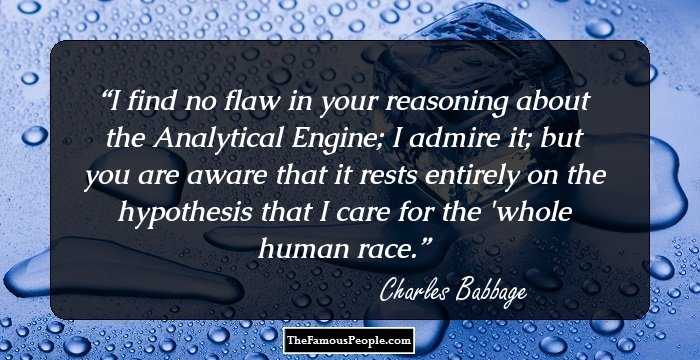 Quotes: You, I
Continue Reading Below
Career
Following his graduation from Cambridge, Babbage applied for numerous posts, but found little success. He lectured on astronomy at the Royal Institution and in 1816, was elected a Fellow of the Royal Society.
In 1820, he helped establish the Astronomical Society, which asked Babbage and Herschel to improve The Nautical Almanac by removing the errors in the tables. This inspired in him, the concept of mechanical computation.
He published "Observations on the Application of Machinery to the Computation of Mathematical Tables" in 1822, in the Astronomical Society and constructed a small machine to compute the table of squares.
In 1823, following the Royal Society’s recommendation, the British government assured to fund the difference engine— an automatic mechanical calculator designed to tabulate polynomial functions. His friend and engineer Marc Brunel recommended Joseph Clement, an artisan, for the construction of the engine.
The difference engine was not completed because of agreements over costs with Clement. A second difference Engine did not receive government funding and was abandoned; however, it was finally constructed between 1989 and 1991 to celebrate the 200th anniversary of Babbage's birth.
He worked with his Cambridge friend and fellow mathematician John Herschel, on Arago’s rotation and the electrodynamics surrounding the phenomenon, in 1825. Their work was used and broadened by Michael Faraday.
In 1826, he bought George Barrett’s actuarial tables. Barrett had died leaving unpublished work. Based on his study of Barrett’s work, Babbage published ‘Comparative View of the Various Institutions for the Assurance of Lives’.
He was denied secretaryship of the Royal Society despite being promised. In 1826, he published his design for an open submarine vessel with adequate air for four persons to last more than two days.
From 1828 to 1839, Babbage was Lucasian Professor of Mathematics at Cambridge, an esteemed academic post, and was voted as Foreign Honorary Member of the American Academy of Arts and Sciences.
Continue Reading Below
He tried to enter Parliament and twice was a candidate from Finsbury borough in the 1830s, but lost narrowly. His political views included broadening political franchise and, separation of state and Church.
In 1830, as a polemicist, he published ‘Reflections on the Decline of Science and some of its Causes’. It led to the formation of the British Association for the Advancement of Science (BAAS).
His, ‘On the Economy of Machinery and Manufactures’, in 1832, is one of the earliest work on operational research. The "Babbage principle" supported division of labor on the degree of skill.
In 1837, he published his Ninth Bridgewater Treatise under the title ‘On the Power, Wisdom and Goodness of God’. He outlined his concept of creation in which natural law dominated.
In cryptology, he was able to decode the Vigenere's autokey cipher during the 1850s at the height of the Crimean War, but his discovery was kept a military secret and not published.
Major Works
Babbage designed a complex machine called the Analytical Engine which could be used for general computation and was programmed by punched cards. The Engine was continuously redesigned and developed from 1833 until his death.
In 1838, he invented the pilot, a metal frame in front of locomotives that clears the tracks of obstacles and designed a dynamometer car that would record the progress of the locomotive.
Personal Life & Legacy
In 1814, Babbage married Georgiana Whitmore. Of the couple’s eight children, only, four namely, Benjamin Herschel, Georgiana Whitmore, Dugald Bromhead and Henry Prevost, survived till adulthood.
He died of renal inadequacy at the age 79, and was buried in London's Kensal Green Cemetery. A green plaque commemorates the 40 years he resided at 1 Dorset Street, Marylebone.
Among the many things named after him, is a crater on the moon and a locomotive, while The Charles Babbage Institute, an information technology center, functions at the University of Minnesota.
Trivia
This polymath’s friend and admirer Ada Lovelace is regarded as the world's first computer programmer because she prepared an algorithm designed to be executed by a machine.
This mathematician was one of the four scientists who independently discovered dendrochronology or the study of tree rings; however, A. E. Douglass is regarded as the father of dendrochronology
Recommended Lists:
Scientists #27
Inventors & Discoverers #31

See the events in life of Charles Babbage in Chronological Order