(Computer Scientist and Inventor of the World Wide Web)

Advanced Search
Sir Tim Berners-Lee is a British computer scientist best known for inventing one of the most revolutionary inventions of the 20th century, the ‘World Wide Web’ (WWW). A qualified software engineer, he was working at ‘CERN’ when he came up with the idea of a global network system. Sir Tim is also credited for creating the world’s first web browser and editor. He founded the ‘World Wide Web Foundation’ and directs the ‘World Wide Web Consortium’ (W3C). Both his parents worked on ‘Ferranti Mark I,’ the first commercial computer, which explains why Tim chose to become a software engineer and computer scientist. Not surprisingly, his idea of a global network has had a phenomenal impact on the world of information and technology. An alumnus of the ‘University of Oxford,’ he realized the need for a global communication network while working at ‘CERN.’ He came up with the idea when researchers from all over the world needed to share their data with each other. By the late-1980s, he had come up with a proposal for creating a global hypertext document system using the internet. A few more years of pioneering work in the field led to the birth of the ‘World Wide Web,’ making Berners-Lee one of the most significant inventors of the modern era. Frederick Sanger
8th June In History
DID WE MISS SOMEONE?
CLICK HERE AND TELL US
WE'LL MAKE SURE
THEY'RE HERE A.S.A.P
Quick Facts

British People
British Men
Male Scientists
Gemini Scientists
British Inventors
Childhood & Early Life
Tim Berners-Lee was born Timothy John Berners-Lee on June 8, 1955, in London, England, to Mary Lee Woods and Conway Berners-Lee. He has three siblings. Both his parents worked on the first commercially-built computer, the ‘Ferranti Mark 1.’ Thus, Tim was fascinated by computers from a young age.
He received his primary education from ‘Sheen Mount Primary School’ before moving on to London's independent ‘Emanuel School’ where he studied from 1969 to 1973.
He enrolled at ‘The Queen’s College’ of the ‘University of Oxford’ in 1973 and graduated in 1976 with a first-class degree in physics. 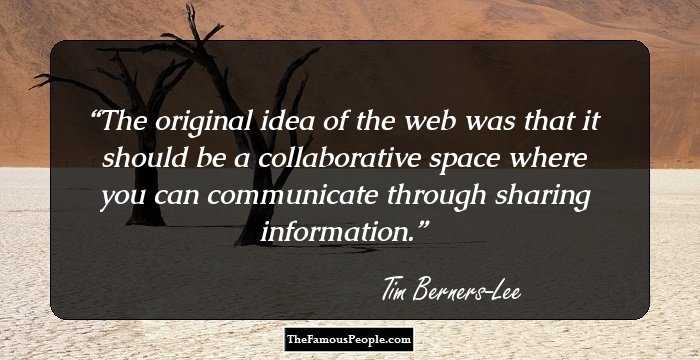 Quotes: You
Continue Reading Below
Career
He was appointed as an engineer at the telecommunications company ‘Plessey’ in Poole after completing his studies. He remained there for two years, working on distributed transaction systems, message relays, and bar code technology.
He left ‘Plessey’ in 1978 and joined ‘D. G. Nash Ltd.’ This job required him to write typesetting software for intelligent printers and a multitasking operating system.
In the late-1970s, he began working as an independent consultant and worked for many companies, including ‘CERN’ where he worked from June to December 1980 as a consultant software engineer.
While at ‘CERN,’ he wrote a program called ‘Enquire’ for his own personal use. It was a simple hypertext program which would later lay the conceptual foundation for the development of the ‘World Wide Web.’
He started working at John Poole’s ‘Image Computer Systems, Ltd.’ in 1980. For the next three years, he worked on the company’s technical side which enabled him to gain experience in computer networking. His work included real-time control firmware, graphics, and communications software, and a generic macro language.
He returned to ‘CERN’ in 1984 after receiving a fellowship. During the 1980s, thousands of people were working for ‘CERN’ and they needed to share information and data with each other. Much of the work was done by exchanging emails and the scientists had to keep track of different things simultaneously. Tim realized that a simpler and more efficient method of data sharing had to be devised.
In 1989, he wrote a proposal for a more effective communication system within the organization which eventually led to the conceptualization of the ‘World Wide Web’—an information sharing system that could be implemented throughout the world.
The world’s first ever website ‘Info.cern.ch’ was built at ‘CERN.’ It went online on 6 August 1991, ushering in a new era in the field of communication and technology. The site provided information on ‘World Wide Web’ and how it could be used for sharing information.
He established the ‘World Wide Web Consortium’ (W3C) at the Massachusetts Institute of Technology’s Laboratory for Computer Science in 1994. The W3C decided that its technologies should be royalty-free so that anyone could adopt them.
Continue Reading Below
He became a professor in the Computer Science Department at the ‘University of Southampton,’ UK, in December 2004. There, he worked on the Semantic Web.
In 2006, he became the co-director of the ‘Web Science Trust’ which was launched to analyze the ‘World Wide Web’ and devise solutions to optimize its usage and design. He also began serving as the director of the ‘World Wide Web Foundation,’ which was started in 2009.
Along with Professor Nigel Shadbolt, he is one of the key figures behind ‘data.gov.uk,’ a UK government project to make non-personal UK government data more accessible to the public.
Tim joined the Department of Computer Science at ‘Oxford University’ as a professorial research fellow. He also became a fellow of ‘Christ Church’ in October 2016.
In September 2018, Tim announced 'Inrupt,' his new open-source startup, which aims to put users in control over their personal data. It also aims to let users decide where the data should go and which apps are allowed to see the data.
Berners-Lee and the WWWF launched ‘Contract for the Web’ at the ‘Internet Governance Forum’ in Berlin in November 2019.
Major Works
His invention, the ‘World Wide Web,’ is counted among the most significant inventions of the 20th century. The web revolutionized the world of information and technology and opened up several new avenues.
Awards & Achievements
He was presented with ‘The Software System Award’ from the ‘Association for Computing Machinery’ (ACM) in 1995.
He was named one of the ‘100 Most Important People of the 20th Century’ by ‘Time’ magazine in 1999.
He was made Commander of the Order of the British Empire (KBE) during the 2004 New Year Honours “for services to the global development of the Internet.”
In 2013, he was one of the five Internet and Web pioneers who were awarded the inaugural ‘Queen Elizabeth Prize for Engineering.’
He received the 2016 ‘ACM Turing Award’ “for inventing the World Wide Web, the first web browser, and the fundamental protocols and algorithms allowing the Web to scale” on 4 April 2017.
Personal Life & Legacy
He met Jane while studying physics at ‘Oxford’ and married her soon after his graduation in 1976. The marriage, however, ended in divorce.
While working for ‘CERN,’ he became acquainted with Nancy Carlson, an American software engineer. They fell in love and tied the knot in 1990. This marriage too ended in divorce in 2011. They have two children.
in June 2014, he got married to Rosemary Leith at the ‘Chapel Royal’ in London.