Cesare Pavese was one of the most creatively proficient novelist and translator who introduced modern US and English writers to Italy. His works represented literature of an age for the Italians. More so, they fostered the reading and appreciation of the works of US writers in the country. Pavese was fond of English literature since young and slowly took it as his career option. Most of his works have a typicality of a loner character who shares a temporary and superficial relationship with men and women. Another factor that lies common in his work is that most of the works revolve around the Langhe area where he spent his summer holidays as a boy. Pavese spent much of hjis life working as a translator. He was briefly imprisoned for carrying letters of a political prisoner. However, post his incarceration, he resumed his literary career and published his works. He wrote in every possible genre including poetry, essays, novels, letters and critic pieces. To know more about his life and work, read through the following lines. Italian Celebrities
Novelists
Essayists
Literary Critics
Short Story Writers
Childhood & Early Life
Cesare Pavese was the youngest of the five children born to a couple in Santo Stefano Belbo. Not much is known of his parents except the fact that his father died when he was six.
He received his early education at Santa Stephano Belbo. Thereafter, together with his family, he relocated to Turin. It was at Turin that he enrolled at a high school and came under the influence of Augusto Monti, a writer and educator.
Since young, he showed interest in English language literature. After completing high school, he enrolled at the University of Turin and graduated in letters from the same with a thesis on the poetry of Walt Whitman. 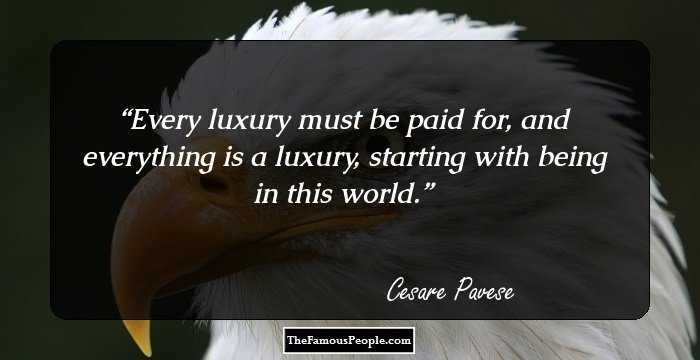 The Hottest Male Celebrities With The Best Abs
Career
Though he was creatively proficient, he was denied of publishing works due to the fascists control over literature. It was due to the same that he took up a translating job for publisher, Frassinelli.
His profile included translating the works of classic and recent American and British authors such as Gertrude Stein, John Steinbeck, John Dos Passos, Ernest Hemingway, William Faulkner and James Joyce. He even translated works by Herman Melville and Sherwood Anderson.
In 1934, he took up the position of an editor and translator for the left wing publisher, Giulio Einaudi. He edited the anti-fascist works in the magazine ‘La Cultura’
Alongside his literary career, he became an ardent supporter of the antifascist groups. In 1935, he was arrested and imprisoned for carrying letters of a political prisoner.
Following this, he was send to an internal exile in Southern Italy, a prison generally meant for prisoners with lesser political crimes. He was released the following year after the completion of his term.
In 1936, he returned to Turin and made his debut in the literary world with a collection of verses entitled ‘Lavorare stanca’ (Hard Labour). Since the German troops had gained full control of the place, he fled to the hills around Serralunga di Crea, near Casale Monferrato, where he took refuge.
Following the end of World War II, he joined hands with the Italian Communist Party (PCI). He contributed towards the party’s newspaper, L’Unita. Much of his work came around this period.
In 1941, he penned and published two novels, ‘Paesi Tuoi’ (or Your Villages) and ‘La Spiaggia’ (or The Beach). Following these publications, he came up with the works, ‘Feria d'agosto (or August Holiday) in 1946 and ‘Il Compagno’ (or The Comrade) in 1947.
In 1947, he came up with his most important work, ‘Dialoghi con Leuc�’ or Dialogues with Leuco, which was a politically written conversation about human condition. It presented philosophical dialogues between classical Greek characters.
Continue Reading Below
Other than writing he served as a mentor for his former studnt, a young writer and translator, Fernanda Pivano at the Liceo D'Azeglio.
In 1948, he wrote the novel, ‘Il diavolo sulle colline’ (or The Devil in the Hills). This was followed by the work, ‘Prima che il gallo canti’ (or Before the Cock Crows) and two novellas ‘La casa in collina’ (or The House on the Hill) and Il carcere (or The Prison).
In 1949, he released the work, La bella estate (or The Fine Summer), which included three novellas such as 'La tenda', written in 1940, 'Il diavolo sulle colline' (1948) and 'Tra donne sole' (1949). For the work, he was even awarded with a Strega Prize
Towards the later part of his life, he came up with a collection of literary essays titled, ‘Saggi Letterari’, two volume of short stories, ‘Racconti’ and two volumes of letters ‘Lettere 1926 to 1950’. He even came up with a collection of poem titled, ‘Disaffections: Complete Poems 1930-1950’.
La luna e i fal� (The Moon and the Bonfires) was his last novel published. It is considered as his best work as the protagonist of the story tries to find himself by visiting the place he grew up in. The book was published in Italy in 1950 and translated into English as The Moon and the Bonfires by Louise Sinclair in 1952.
He penned his final work, the poem ‘Verr� la morte e avr� i tuoi occhi’ (or Death Will Come and Have your Eyes). In it, ‘Death’ is figuratively used as a feminine noun.
He came up with the diary, ‘Il mestiere di vivere: Diario 1935–1950’ (or The Business of Living: Diaries 1935-1950). The same was translated and published in English as ‘The Burning Brand’ posthumously. 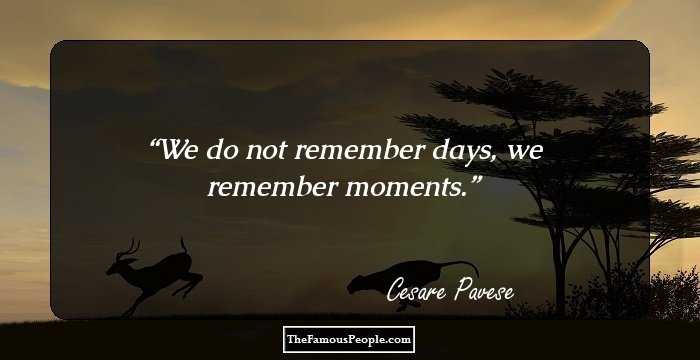 Awards & Achievements
In 1950, he was awarded with the Strega Prize for ‘La Bella Estate’, comprising three novellas: ‘La tenda’, written in 1940, ‘l diavolo sulle colline’ (1948) and ‘Tra donne sole’ (1949).
Personal Life & Legacy
Not much is known about his personal life except for the fact that he had a brief affair with actress Constance Dowling, to whom he dedicated his last novel.
The failed love affair coupled with depressive mental state and political disillusionment led him to commit suicide by having an overdose of barbiturates in a hotel room in Turin in 1950.
He was an atheist. 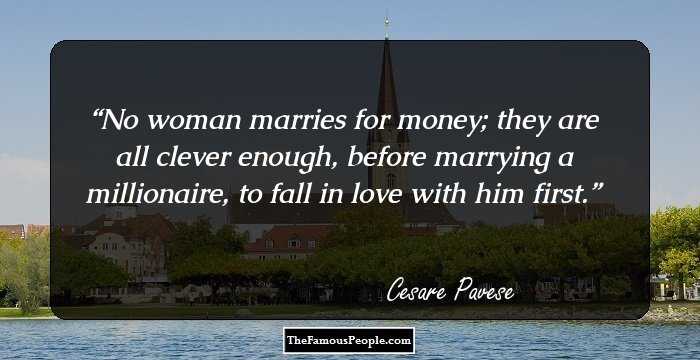 Quotes: Love
Trivia
This Italian writer and supporter of the Italian Communist Party committed suicide after having a torrid affair with Constance Dowling
Recommended Lists:
Literary Critics #39
Essayists #166
Writers #3082
Critics & Connoisseurs #109
You May Like

Quotes By Cesare Pavese | Quote Of The Day | Top 100 Quotes

See the events in life of Cesare Pavese in Chronological Order