(Italian Playwright and Novelist & Winner of 1934 Nobel Prize in Literature)

Advanced Search
Luigi Pirandello was as Italian writer and dramatist who won the 1934 Nobel Prize for Literature "for his bold and ingenious revival of dramatic and scenic art". A prolific writer, he wrote several hundreds of short stories, about 40 plays, and many novels. As a dramatist he is credited to have introduced the concept of “theatre within the theatre” in the play ‘Sei personaggi in cerca d’autore’ which earned him much acclaim as an innovator in modern drama. Born as the son of a sulfur merchant, it was expected that he would enter the same business on growing up. However, life had other plans for the creative Luigi who loved writing from a young age. He had always been fascinated by the art of story-telling and voraciously read the works of 19th-century Italian poets such as Giosuè Carducci and Arturo Graf. He eventually embarked on a writing career with the support of his friends and began publishing his works by the 1890s. However, an unexpected family crisis shattered his personal and professional life and he was forced to refocus his career. Already an established writer of short stories at this time, he went on to focus more on playwriting and emerged as one of the most innovative dramatists of the early 20th century. Cesare Pavese
DID WE MISS SOMEONE?
CLICK HERE AND TELL US
WE'LL MAKE SURE
THEY'RE HERE A.S.A.P
Quick Facts

Italian Celebrities
Poets
Playwrights
Short Story Writers
Italian Men
Childhood & Early Life
Luigi Pirandello was born on 28 June 1867, in Agrigento, Sicily, Italy, to Stefano Pirandello and his wife Caterina Ricci Gramitto. His father was a businessman hailing from a wealthy family involved in the sulfur industry.
He was initially educated at home. As a young boy he became fascinated with legends and fables, and developed a love for reading and writing. He wrote his first tragedy before he turned 12.
While in high school he read voraciously and started writing his first poems. During this time the relationship between Luigi and his father became strained as the teenager had discovered proof of his father’s extramarital relations.
In 1886, he started working with his father at the sulfur mines during his vacation. The experience he gained there would be reflected in his future writings.
Wanting to further his education, he enrolled at the University of Palermo in the departments of Law and of Letters. He moved to the University of Rome in 1887. But he did not stay there for long; he got into a quarrel with a professor and went to Bonn.
Life in Bonn proved to be full of profound learning experiences for him. He read the German romantics, Jean Paul, Tieck, Chamisso, Heinrich Heine and Goethe, and also began translating the Roman Elegies of Goethe.
He received his doctorate in Romance Philology in March 1891 with a dissertation on the dialect of Agrigento: ‘Sounds and Developments of Sounds in the Speech of Craperallis’. 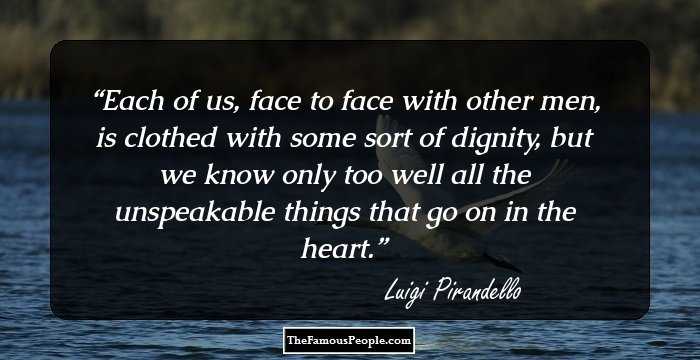 Quotes: Heart
Continue Reading Below
Career
He returned to Rome and became friends with a group of writer-journalists including Ugo Fleres, Tomaso Gnoli, Giustino Ferri and Luigi Capuana. His friends encouraged him to write and Pirandello wrote his first important work ‘Marta Ajala’ in 1893. In 1894 he published his first collection of short stories, ‘Amori senza Amore’. He also began writing for newspapers and magazines during this time.
Alongside his writing career he began teaching Italian at the ‘Istituto Superiore di Magistero di Roma’ in 1897. The next year he collaborated with Italo Falbo and Ugo Fleres to found the weekly ‘Ariel’ in which he published the one-act play ‘L'Epilogo’ (later changed to La Morsa).
The early 1900s was an extremely productive period for him. He had by now established himself as a popular writer of short stories and novellas and his work was also published in several newspapers and magazines.
A family tragedy in 1903 changed the course of his life. Following a great financial loss, his wife became mentally ill. Now the writer was burdened with the double responsibility of stabilizing the family’s financial position and caring for his ill wife.
He was able to successfully stabilize his financial situation within a few years though his personal life became very hard. It was while dealing with his chaotic family life that he published the first part of ‘I Vecchi e I Giovani’ in episodes in 1909. It was released as a novel in 1913.
The World War I began in 1914. During this period he began to focus more on writing plays. He wrote over 50 plays and gained tremendous respect as a dramatist. His fame skyrocketed during the 1920s, precipitated mainly by the success of the plays ‘Six Characters in Search of an Author’ (1921) and ‘Enrico IV’ (1922).
He was a supporter of Mussolini, a powerful politician and the leader of the National Fascist Party. Mussolini helped Pirandello acquire the artistic direction and ownership of the Teatro d'Arte di Roma. Pirandello toured the world with the company during 1925-27.
Teatro d'Arte di Roma underwent huge losses and was dissolved in 1928. Pirandello spent the rest of his life in extensive travel. 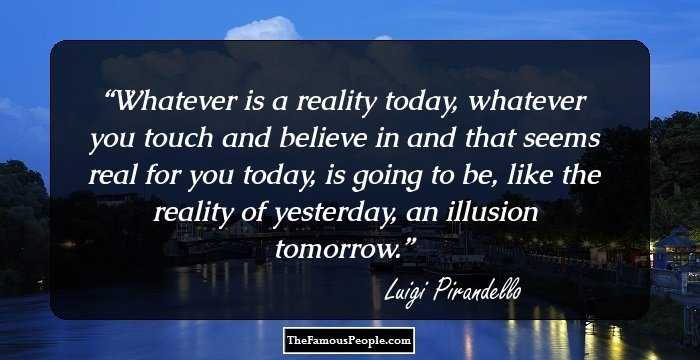 Quotes: You, Like, Believe
Major Works
Luigi Pirandello’s best known play is ‘Six Characters in Search of an Author’ which is about the relationship between authors, their characters, and theatre practitioners. Its first performance was not successful though the reception greatly improved with subsequent productions. It earned him praise not only in Italy but throughout the world.
His play ‘Enrico IV’ was another one of his much acclaimed works. It is about an actor and historian who plays the role of Henry IV, Holy Roman Emperor, in a historical pageant and actually starts believing that he is indeed Henry IV.
Awards & Achievements
Luigi Pirandello was awarded the Nobel Prize in Literature in 1934 "for his bold and ingenious revival of dramatic and scenic art". 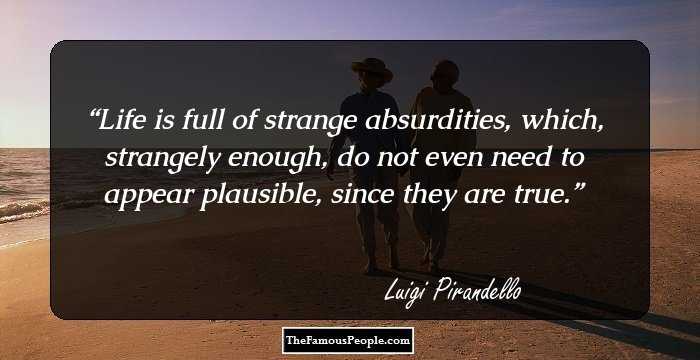 Quotes: Life, Need
Personal Life & Legacy
As a young man he fell in love with his cousin Lina. Their families, which protested initially, eventually agreed to the marriage. However the marriage was called off later on.
His father arranged his marriage with a girl called Antonietta Portulano who hailed from a wealthy family. The couple’s initial years together were happy and produced three children. However, his wife became mentally ill following a financial crisis in 1903 and he spent several years taking care of her. Ultimately he had to get her admitted to an asylum in 1919 when he was no longer able to take care of her.
Luigi Pirandello died in his home on 10 December 1936.
Recommended Lists:
Writers #619

Quotes By Luigi Pirandello | Quote Of The Day | Top 100 Quotes

See the events in life of Luigi Pirandello in Chronological Order