Alberto Moravia was a renowned Italian novelist and journalist. He authored novels which explored modern sexuality, social alienation and existentialism. He had a keen moralistic approach which focuses mainly on the iniquities of a bourgeois society. Someone who portrayed social alienation and loveless sexuality as the theme in his novels, he was a prominent figure in 20th century Italian literature. It is said almost one billion copies of his books were sold in United States during 1940’s and 1950’s. Besides founding literary review magazines like “Characters” and “Today”, he used to write for the newspaper “La Gazetta del Popolo”. He also founded a literary magazine, titled “New Arguments”. Besides writing prefaces to works like Belli’s “100 Sonnets” and Stendhal’s “Roman Walks”, he also wrote critical review of films for weekly magazine “L’Europeo” and “L’Espresso”. His noteworthy novel “The Empty Canvas” won the Viareggio Prize and its story provided inspiration for a film by Damiano Damiani. The book became so popular that another film, “The Ennui” was also made based on its story. He also won the title of ‘European Personality’ and received prestigious awards like the Strega and Viareggio. His popularity can be gauged from the fact that his works were translated into 27 languages. Umberto Eco
DID WE MISS SOMEONE?
CLICK HERE AND TELL US
WE'LL MAKE SURE
THEY'RE HERE A.S.A.P
Quick Facts

Italian Celebrities
Journalists
Italian Men
Male Writers
Male Novelists
Childhood & Early Life
Coming from a wealthy middle class family of Via Sgambati in Rome, Moravia was the son of Carlo, an architect and painter and Teresa Iginia de Marsanich.
On account of suffering from tuberculosis of the bone, he was confined to bed for five years. Therefore, he could not finish conventional schooling. Instead, he spent three years at home and the remaining two years in a sanatorium.
He was a voracious reader; some of his favourite authors included Giosu� Carducci, Dostoevsky, Boccaccio, Joyce, Goldoni, Shakespeare, Ariosto, Moli�re, Gogol, Mallarm�. He was also well versed in French and studied English and German languages. He could write poems in both languages.

Quotes: Love
Continue Reading Below
Career
After leaving the sanatorium in 1925, he moved to Bressanone. In 1927, after meeting with Corrado Alvaro and Massimo Bontempelli, he started his journalism career with the magazine “900”.
Magazine “900” published several of his short stories like “The Tired Courtesan”, “Crime at the Tennis Club” and “The Curious Thief”. He published, “Time of Indifference”, his first novel in 1929.
In the year 1930, he collaborated with “La Stampa”, a newspaper. In 1933, along with Mario Pannunzio, he started the publication of literary review magazine “Characters” and “Today”.
In 1935, he went to the United States to deliver lectures on Italian literature. In the same year his reviews of “Le Ambizioni Sbagliate” faced a ban by the Fascist regime.
In 1937, his work “The Cheat” appeared. To avoid Fascist censorship, he discussed about surrealist and allegoric genres in it. After the Fascist seized the second edition of “La Mascherata” in 1941, he started writing under a pseudonym.
In the year 1941, his writing titled “Two Adolescents” was banned from publication by the Fascist regime. He took shelter in Fondi, situated on the border of Ciociaria after the Armistice in 1943.
He returned to Rome in the month of May 1944. After returning, he collaborated with Corrado Alvaro and wrote for newspapers like “II Mondo” and “II Corriere della Sera”.
After the end of the second world war, his works became more popular and he wrote books like La Romana (The Woman of Rome) (1947), La Disubbidienza (Disobedience) (1948), L'Amore Coniugale e altri racconti ("Conjugal Love and other stories") (1949) and Il Conformista ("The Conformist") (1951). He won the Premio Strega for I Racconti in 1952. As his books started to become popular worldwide, they also began to be translated in many languages.
In this year, Mario Soldati adapted his novel “La Provinciale” for a film. In 1954, Luigi Zampa directed “The Woman of Rome”, based on his novel and in the next year, Gianni Franciolini directed The Roman Stories”.
Continue Reading Below
His visit to Africa in 1972 inspired his work “Which Tribe Do You Belong To?” His visit to Hiroshima in Japan in 1982 acted as the inspiration for a number of articles on atomic bomb written for “L’Espresso” magazine.
In 1984, he was elected to the European Parliament as member from the Italian Communist Party. In 1990, he published his autobiography “Vita di Moravia” (“Life of Moravia”). 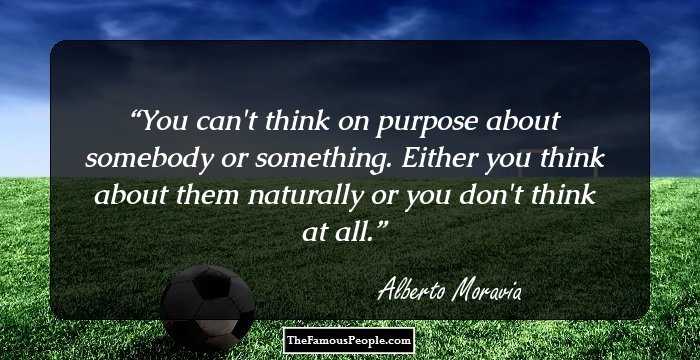 Quotes: You, Think
Major Work
His first novel “Time of Indifference”, published in 1929, was his analytical view of the moral decadence of a middle-class mother and two of her children. Literary critics praised this novel by referring it as a remarkable example of contemporary Italian narrative fiction.
One of his most famous novels was “The Empty Canvas”. It is a story about the troubled physical relationship between a young, rich painter and an easygoing girl in Rome.
Personal Life & Legacy
He met novelist Elsa Morante in 1936 and married her in 1941. After their marriage, they lived in Capri. They separated in 1962 and thereafter he started living with writer Dacia Maraini.
In 1986, he married Carmen Llera. He dedicated his short story collection “The Thing and other stories” to Carmen.
At the age of 82, he was found dead in the bathroom of his Lungotevere apartment in Rome. 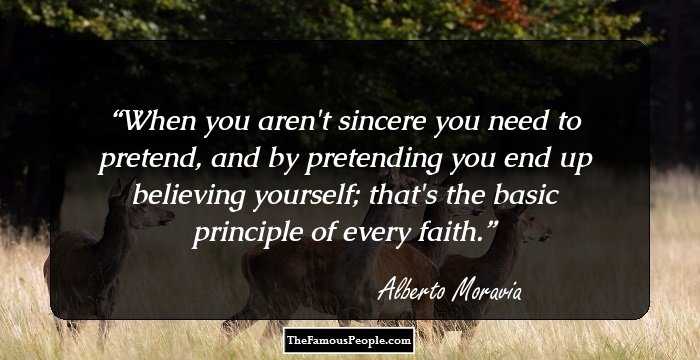 Quotes: You, Need
Trivia
This notable writer served as the President of the worldwide association of writers PEN International between the year of 1959 and 1962. This London based organization works to promote intellectual co-operation among writers.
Recommended Lists:
Media Personalities #2345

Quotes By Alberto Moravia | Quote Of The Day | Top 100 Quotes

See the events in life of Alberto Moravia in Chronological Order