Christine de Pizan was a French writer of medieval era known for her pioneering works about feminist literature. She was also the first women in Europe to actually make a living through writing. Born to Tommaso di Benvenuto da Pizzano, she spent the early years of her life at the court of King Charles V where her father served as an astrologer and physician. The exposure to an extensive library at the court of King Charles V opened gateway for new learning for the little de Pizan. She soon immersed herself in reading and by early teens acquired knowledge about a range of topics, from classics to languages and humanism of early Renaissance. Though de Pizan was passionate about writing, it wasn’t until her husband’s death that she took to it professionally. In her career spanning three decades, she penned 41 works, of which a large amount included vernacular works in both prose and verse. Her works include political treatises, mirrors for princes, epistles, and poetry. She also penned books containing practical advice for women. She often argued against the traditional roles of women and urged for equality between the sexes. Christine de Pizan is today looked upon as one of the early feminists, who through her works, laid the fact that women can play an important role in the society. Italian People
Italian Women
Women Poets
Italian Poets
Women Writers
Childhood & Early Life
Christine de Pizan was born to Tommaso di Benvenuto da Pizzano on September 11, 1364 in Venice, Italy. Her father served as an astrologer, physician and Councillor of the Republic of Venice. It was after her birth that he served King Charles V of France as the latter’s astrologer, alchemist, and physician.
At a young age, Christine joined her father in France. At the court of King Charles V, Christine was exposed to a learning atmosphere which granted her knowledge about a range of topics including classics, languages and humanism of early Renaissance.
Access to an extensive library packed with valuable literary collection was one of the key benefits for Christine while living at the French court. This gave her an opportunity to study some of the greatest works in literature, science and philosophy.
Intelligent and knowledgeable, de Pizan’s educational background built the base for her writing career. Married at an early age, she did not forego her intellectual pursuits which were in turn backed by her husband who supported her interest in writing all through. 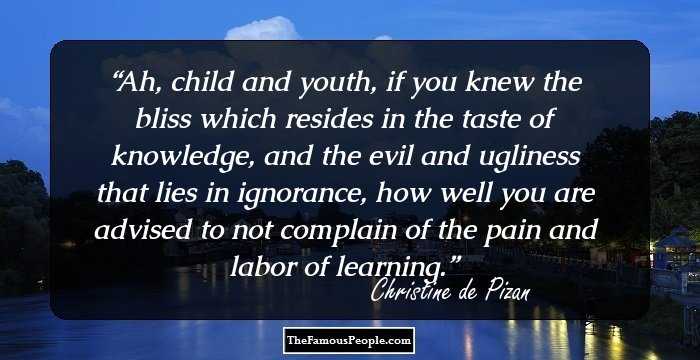 Quotes: You, Learning
Continue Reading Below
You May Like

The Best Black Actresses Of All Time
Career
Christine de Pizan’s career did not begin until she turned 25. Tragedy struck her life as a bubonic plague left her widowed. The sudden death of her husband, Etienne du Castel, forced her to turn to writing to make ends meet, for she had her two children, her mother and a niece to support.
Having gained support from the royals such as Louis I, Dukes of Burgundy—Philip the Bold and John the Fearless—and Isabella of Bavaria, she made her foray into writing poetry.
By 1393, she had started penning love ballads that earned her attention of the wealthy patrons within the court. Impressed by her literary skills, the patrons often asked her to pen their romantic exploits in text forms.
Between 1393 and 1412, de Pizan composed over 300 ballads, and many more short poems. Some of her works reflected her deep-seated grief of her husband’s death.
From 1401, de Pizan’s literary skills went past the courtly circles. She participated in the literary debates held outside court, thus bringing to public her skills as a litterateur and establishing her status as a writer.
Though de Pizan gained a lot of attention for her works, it was her attack over Jean de Meun’s ‘The Romance of the Rose’ that brought her much limelight. Initially de Pizan only intended to stand against the use of vulgar terminology in Meun’s poetry. However, the criticism soon shifted focus from use of vulgar words to unjust slander of women in literary texts.
Christine de Pizan’s critique of Meun’s work was the beginning of her counter-attack on the abusive literary treatment of women in literature. She soon built a reputation for herself in the male dominated literary world as an intellectual female with assertive personality.
In 1404, acting upon the request of the Duke of Burgundy, Philip the Bold, she penned a biography on the life of deceased King Charles V titled, ‘Le Livre des fais et bonnes meurs du sage roy Charles V’ (Book of the Deeds and Good Morals of the Wise King Charles V). The book gave a first-hand insight of Charles V and his court.
In 1405, she completed her most famous works, ‘Le Livre de la cité des dames’ (The Book of the City of Ladies) and ‘Le livre du trésor de la cité des dames’ (The Treasure of the City of Ladies). While the former gave an insight about the past contribution by women to the society and bore the seeds of gender equality, the latter taught women all over on how to cultivate good qualities and stand for their rights.
Christine de Pizan’s latter literary life was marred by the political and military clash between France and England during the Hundred Years War. It was after the disastrous defeat in the Battle of Agincourt that de Pizan shifted to a convent located in Poissy, France.
In 1429, she penned her last work, a lyrical, ‘Le Ditié de Jehanne d’Arc’ that celebrated and eulogized the works of a simple shepherdess, Joan of Arc. 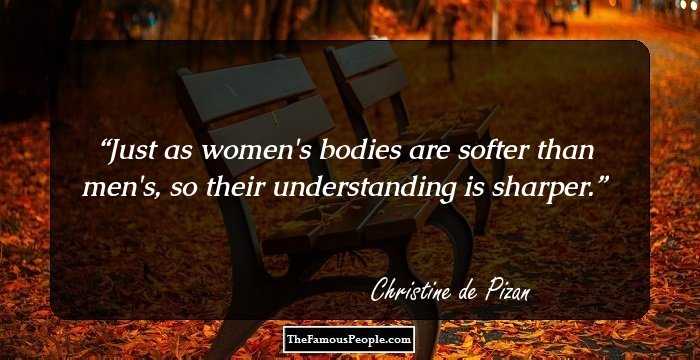 Major Works
In her three decades long career, de Pizan wrote about 41 works in both prose and poetry. Though all her works predominantly defied the traditional role of women and their status in the society, two of his works which became hugely popular were ‘Le Livre de la cité des dames’ and ‘Le Livre des trois vertus’. Considered amongst the first feminists texts ever written, both the works revived the status of women in the society and called for gender equality. She also criticized the depiction of women in literature and espoused for their rights in her works.
Personal Life & Legacy
Christine de Pizan married at an early age of 15. Her husband, Etienne du Castel, served as a royal secretary to the court. The couple was blessed with three children of which two survived.
Tragedy struck de Pizan’s life early as her husband Castle died an untimely death while on a mission to Beauvais. He was a victim of the bubonic plague that had spread like an epidemic.
Christine de Pizan spent the latter years of her life at a convent in Poissy, France and died around 1430. 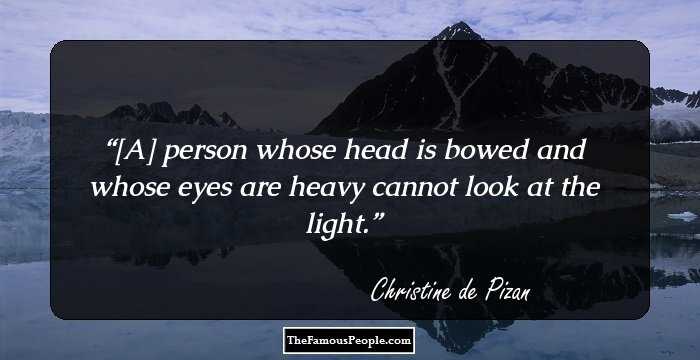