Advanced Search
Atal Bihari Vajpayee was a highly respected veteran politician who had served as the Prime Minister of India in three non-consecutive terms. He was a member of the Indian Parliament for almost five decades; in fact he was the only parliamentarian who had been elected from four different states at different times, namely, Uttar Pradesh, Madhya Pradesh, Gujarat and Delhi. He made his foray into politics during the pre-independence era when he took part in the Quit India Movement which led to his arrest and imprisonment. A true patriot, he was one of the founding members of the erstwhile Bharatiya Jana Sangh, an Indian nationalist party. A multi-faceted personality, he was a very skilled poet with several published poems. Also well known is his love for his native language Hindi—he was the first person to deliver a speech in Hindi at the U.N. General assembly. He was very famous for his oratory skills and held several prestigious positions in Indian politics before being elected the Prime minister. His first stint as the Prime Minister of India lasted for just 13 days. He was again sworn in for the second time after a couple of years. This time too, his government lasted for just over a year. His third stint as the Prime Minister was his most successful one and he served a full term of five years in this position. Manmohan Singh
DID WE MISS SOMEONE?
CLICK HERE AND TELL US
WE'LL MAKE SURE
THEY'RE HERE A.S.A.P
Quick Facts

Indian Celebrities
Political Leaders
Indian Men
Male Leaders
Indian Leaders
Childhood & Early Life
Atal Bihari Vajpayee was born into a middle-class family in Gwalior. His father was Krishna Bihari Vajpayee, a school teacher and poet, and his mother was Krishna Devi.
He attended the Saraswati Shishu Mandir and later went to Victoria College from where he graduated with distinction in Hindi, English and Sanskrit.
He enrolled at DAV College, Kanpur to complete his post graduation and earned his M.A. in Political science.
He was a patriot at heart and participated in India’s struggle for freedom even as a student and edited several nationalist Hindi newspapers. 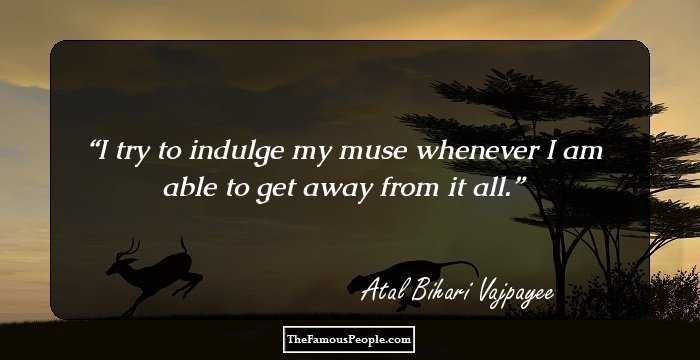 Continue Reading Below
Political Career
He became associated with the Bharatiya Jana Sangh (BJS), a right-wing political party founded by Syama Prasad Mookerjee in 1951. He became a loyal follower of Mookerjee and supported him during his fast-unto-death in Kashmir in 1954.
Vajpayee was elected to the Lok Sabha for the first time from Balrampur (U.P.) in 1957. He proved himself to be an excellent orator and gave powerful speeches.
He was made the national president of the Jana Sangh in 1968 after the death of Deendayal Upadhyaya. Over the next few years he worked tirelessly with Nanaji Deshmukh, Balraj Madhok and Lal Krishna Advani to make the Jana Sangh a prominent presence in Indian politics.
In 1977, the BJS was united with the Bharatiya Lok Dal and the Socialist Party to form the Janata Party. After the victory of the Janata Party in the general elections, Vajpayee became the Minister of External Affairs in Prime Minister Morarji Desai’s government.
The Janata Party was dissolved following Morarji Desai’s resignation as Prime Minister in 1979. Vajpayee, in collaboration with Lal Krishna Advani and Bhairon Singh Shekhawat formed the Bharatiya Janata Party (BJP) in 1980 and became the party’s first president.
After the 1984 elections, when BJP was reduced to two seats, Vajpayee worked tirelessly to build the party and in the next parliamentary elections in 1989 BJP won 88 seats.
By 1991, BJP had emerged as the principal opposition party and the party won 120 seats in 1991 parliamentary elections.
He became the Leader of the Opposition in Parliament in 1993 and in November 1995 at a BJP conference in Mumbai, he was declared as the Prime Ministerial candidate of BJP. 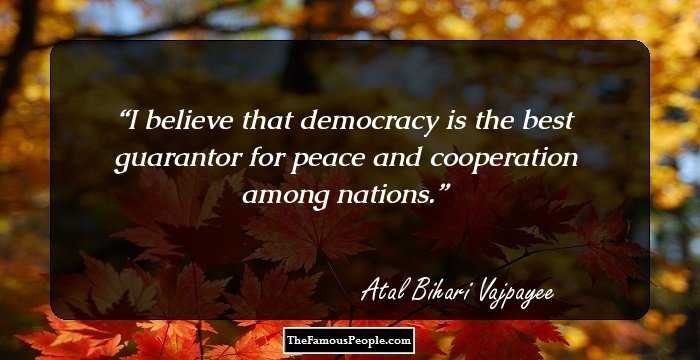 Quotes: Peace
Continue Reading Below
Career as the Prime Minister
The BJP emerged the single largest party in Lok Sabha in the 1996 general elections. Vajpayee was sworn in as the Prime Minister in May 1996. However, he resigned after 13 days since BJP could not obtain a majority.
He was again sworn in as the Prime Minister in 1998 after BJP emerged as the single largest party and formed the National Democratic Alliance (NDA) with other political parties. This government lasted for a little over a year when fresh elections were held.
It was during his tenure that India conducted underground nuclear tests in Pokhran in May 1998, just a month after the government came into power. These tests were regarded a national milestone.
The Kargil War between India and Pakistan took place between May and July 1999. By the end of the war, the Indian Army and Air force had recaptured the areas infiltrated by the Pakistani militants. The Kargil victory cemented the reputation of Vajpayee as a strong and able leader of the nation.
The BJP-led NDA again emerged as the largest political alliance in the 1999 general elections in the wake of the Kargil War victory. Vajpayee was made the Prime Minister for the third time in October 1999.
He introduced many economic and infrastructural reforms like strengthening of private sectors, encouraging private research and development, bringing about privatization of certain government owned corporations, etc. His major projects were National Highway Development Project and Pradhan Mantri Gram Sadak Yojana.
U.S. President Bill Clinton paid a state visit to India in March 2000. Clinton’s visit to India was viewed as very significant in improving the foreign trade and economic relations between the two nations.
Vajpayee’s privatization campaigns were criticized by trade unions and government employees as excessive privatization was not in their favour.
In 2001, he invited the Pakistani President Pervez Musharraf to India with a view to improve Indo-Pak relations. However, this attempt could not achieve much success for India.
Continue Reading Below
He launched the Sarva Shiksha Abhiyan in 2001, with the aim of universalization of elementary education.
The Parliament House in New Delhi was attacked in December 2001 by Pakistan trained terrorists. Investigations pointed to a conspiracy hatched in Pakistan. For a long time the threat of a full-fledged war between the two nations loomed. The Prevention of Terrorism Act, 2002 (POTA) was enacted in the aftermath of the attack.
The Vajpayee government implemented several economic reforms during 2002-03 which resulted in a record growth rate of 6-7% in the GDP. The international image of India also improving due to the rapid developments that took place in the country during this perios.
Vajpayee resigned as Prime Minister in 2004 after Congress emerged as the single largest party in the general elections.
He announced his retirement from active politics in 2005 and didn’t contest the 2009 parliamentary elections.
Major Works
Nuclear tests conducted in 1998 during his reign unambiguously established India as a nuclear state and the country was able to develop a minimum credible deterrent to ward off threats to its security.
The National Highways Develop Project (NHDP) and Pradhan Mantri Gram Sadak Yojana (PMGSY) were two projects that were very close to his heart. NHDP involves connecting the four major cities of Delhi, Mumbai, Chennai and Kolkata. PMGSY is a nationwide plan to provide good all-weather road connectivity to unconnected villages.
He is highly respected for the economic reforms and privatization policies he brought about during his tenure as the Prime Minister of India. His diplomacy and leadership while handling political issues during the Kargil War and terrorist attacks further strengthened his image as a wise and capable leader of India. 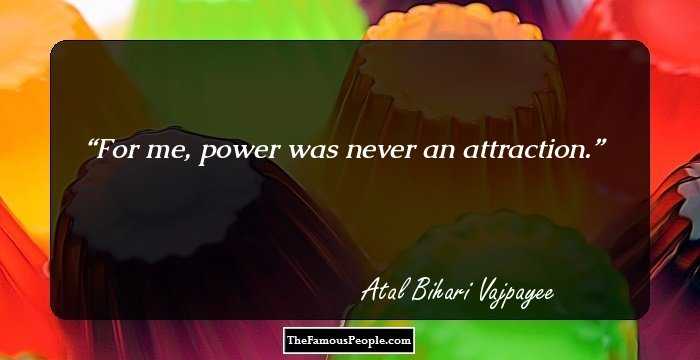 Quotes: Me, Never
Continue Reading Below
Awards & Achievements
He was awarded the Padma Vibhushan, the second highest civilian award in India in 1992 for his distinguished contribution in public affairs.
He was honored with Best Parliamentarian Award in 1994.
In 2014, he was honoured with Bharat Ratna, the highest civilian award of the Republic of India.
Family & Personal Life
Vajpayee remained a bachelor all his life. He had adopted Namita Bhattacharya, the daughter of BN Kaul and Rajkumari Kaul, and was very close to his friends and relatives.
He had a deep love for Hindi and wrote several poems in the language.
He had a long history of illness. He underwent knee replacement surgery in 2001. A stroke in the year 2009 impaired his speech. In the last few years of his life, he was largely confined to a wheelchair and failed to recognise people. He suffered from dementia and diabetes. He had not attended any public event in the last few years of his life.
On June 11, 2018, he was admitted to hospital due to critical health condition. He passed away on August 16, 2018, at the All India Institute of Medical Sciences (AIIMS), New Delhi, after a prolonged illness.
Trivia
Prime Minister Dr. Manmohan Singh called him the Bhishma Pitamah of Indian Politics.
Lata Mangeshkar, Mukesh, and Mohd. Rafi were his favourite singers.
This towering political personality was the only parliamentarian to have been elected from four different states at different times namely UP, MP, Gujarat, and Delhi.