(The Only Black Man to Win the Singles Title at Wimbledon, the US Open, and the Australian Open)

Arthur Ashe, Jr. was one of the most prominent tennis players of his time, ranked among the best players to have ever graced the game. An African American, he was the first black to be ranked No.1 in the world. He started playing tennis from the age of six and received coaching from the legendary Robert Walter Johnson who founded the American Tennis Association Junior Development Program for African American youths. After graduating from high school, he earned a tennis scholarship to University of California, Los Angeles (UCLA). He was the first African American to be selected to play for United States Davis Cup Team. He also became the first black to win the United States Amateur Championship. He went on to win many more titles over the next few years and created several new world records. Unfortunately, health issues forced him to take an early retirement but still he was not disheartened. He used his celebrity status to campaign for various social causes, notably the fight against apartheid. He contracted HIV from a blood transfusion and started educating people about HIV and AIDS in spite of his own struggles with the condition. He founded the Arthur Ashe Foundation for the Defeat of AIDS shortly before his death. John McEnroe
DID WE MISS SOMEONE?
CLICK HERE AND TELL US
WE'LL MAKE SURE
THEY'RE HERE A.S.A.P
Quick Facts

American Celebrities
African American Men
Tennis Players
Black Sportspersons
Black Tennis Players
Childhood & Early Life
Arthur was the elder of two sons born to Arthur Ashe Sr. and Mattie Cunningham. His father worked as a handyman. His mother died of pregnancy related complications when he was just six years old.
He started playing tennis from a young age and attended Maggie L. Walker High school. Upon his graduation from high school he was awarded a tennis scholarship to the University of California, Los Angeles (UCLA) in 1963. 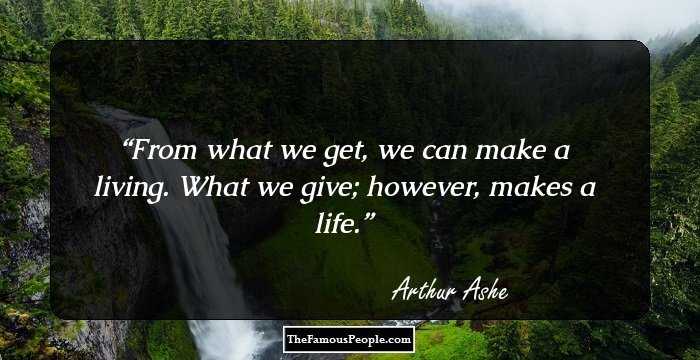 Quotes: Life, Living
Continue Reading Below
Career
He joined the U.S Army in 1966 taking breaks from time to time to pursue his tennis career. He was discharged from the army in 1969.
In 1968, while serving as 1st Lieutenant in the U.S army, he won the U.S Amateur Championship against Bob Lutz. He also won the U.S Open National Championship in the same year, becoming the only player to have won both the championships in the same year.
He won his second Grand Slam singles title at the Australian Open in 1970. The same year, he turned professional by signing a five-year contract with Lamar Hunt’s World Championship Tennis. In 1972, he helped to form the Association of Tennis Professionals (ATP).
In 1975, Ashe played the Wimbledon Final against Jimmy Connors, who was 10-to-1 favorite in the final. But Ashe played brilliantly and defeated Jimmy to win the Wimbledon in an excitingly unexpected match.
The professional career of this exceptionally talented player was unfortunately cut short by health problems and a heart attack forced him to retire in 1980.
Even after he had stopped playing, he kept himself busy by commentating for ABC Sports and writing for Time Magazine. 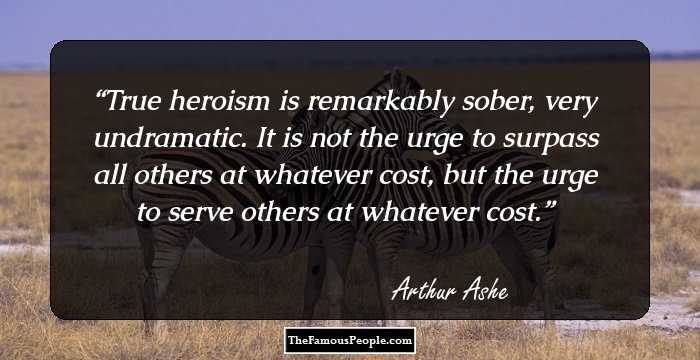 Major Wins
He played the U.S Open final against Tom Okker of Netherlands and defeated him to clinch the title in 1968. It was his first ever Grand Slam title.
He won the Australian Open against Dick Crealy in 1970. This was a major victory for him since he had lost the finals to Roy Emerson in 1966 and 1967. He became the first non-Australian to win the title in 11 years.
Continue Reading Below
He played in the 1971 French Open-Men's Doubles with partner Marty Riessen to defeat Tom Gorman and Stan Smith to win the finals.
In 1975, he became the first black man to win the Wimbledon Singles’ championship by beating the defending champion Jimmy Connors three sets to one. What made this victory even more special for Ashe is the fact that it was the much younger Jimmy and not he, who was the favorite to win the match.
Ashe and his partner Tony Roche beat Charlie Pasarell and Erik Van Dillen to clinch the Australian Open-Men’s Doubles in 1977.
Awards & Achievements
Ashe was inducted into the International Tennis Hall of Fame in 1985 as an honour for his contribution to the sport of tennis.
He was posthumously awarded the Presidential Medal of Freedom, the highest civilian award of the U.S in 1993. The medal honours individuals who have made "an especially meritorious contribution to the security or national interests of the United States, world peace, cultural or other significant public or private endeavors." 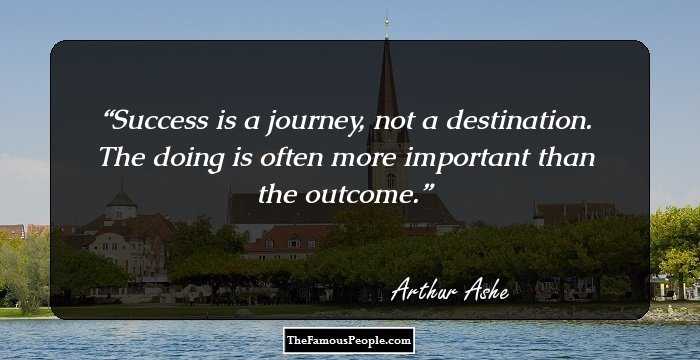 Personal Life & Legacy
Arthur Ashe married photographer Jeanne Moutoussamy in 1977. They had one adopted daughter.
He suffered a heart attack in 1979 and underwent bypass surgery. He had another heart surgery in 1983. In 1988 it was discovered that he was HIV+; he had contracted the virus from a tainted blood transfusion during his previous surgery.
He went public with his illness in 1992 and began to work to raise awareness about AIDS. He founded the Arthur Ashe Foundation for the Defeat of AIDS.
He died from AIDS-related pneumonia in 1993 at the age of 49.
Trivia
He is the only black man to win the singles title at Wimbledon, the US Open, or Australian Open.
He was the first famous athlete to die of AIDS.
His daughter is named ‘Camera’ as his wife was a photographer.
He spent the last years of his life writing his memoir ‘Days of Grace’ which he completed days before his death.

Quotes By Arthur Ashe | Quote Of The Day | Top 100 Quotes

See the events in life of Arthur Ashe in Chronological Order