(One of the Greatest Tennis Players of All Time)
Advanced Search

An iconic player in the field of women tennis, Venus Williams is a name to reckon with. Her excellence at the game is prominent from the fact that she not only bagged herself numerous victories and titles, but went on to become the first African American to rank herself at the World No 1 position. Seven Grand Slam titles, four Olympic Gold medals, thirteen women’s doubles and two mixed doubles title old Venus Williams was blessed with exceptional talent for the game since young. Starting early, Williams turned professional at the age of fourteen and rest as they is history. Game after game, she polished her skills and her prowess in the game to bring out the excellence in her. It is her agility around the net, explosive hitting capability and exceptional serve that has made Williams a top notch player so much so that she holds the record for the fastest serve struck by a woman in a main draw event. For her outstanding contribution in the game of tennis, she has been ranked amongst the ‘30 Legends of Women's Tennis: Past, Present and Future’ by Times. She has also managed herself a position in the Forbes Top 100 Celebrity list. Interestingly, other than being an ace tennis pro, Williams is an exceptional entrepreneur as well. Andy Roddick
Tennis Players #4
Sportspersons #45
DID WE MISS SOMEONE?
CLICK HERE AND TELL US
WE'LL MAKE SURE
THEY'RE HERE A.S.A.P
Quick Facts

American People
Tennis Players
American Women
Indiana University
Tall Celebrities
Childhood & Early Life
Venus Williams was born to Richard Williams and Oracene Price in Lynwood, California. She has four siblings, all sisters. Venus was the fourth child.
The family shifted base to Compton when young Williams was just four years old. This change in location gave her and younger sister, Serena Williams an opportunity to try their hand at the game of tennis.
It was under the guidance of Rick Macci that the Williams sisters’ skill for the game grew by leaps and bounds.
Such was Venus Williams’ talent for the game that she became the No. 1 player among the under-12 players in South California when she was merely eleven. However, racial issues and demeaning comments from the society led to young Williams’ withdrawing their name from the academy.
Richard Williams then shouldered the responsibility of training his daughters at the game on his own and became their official coach. 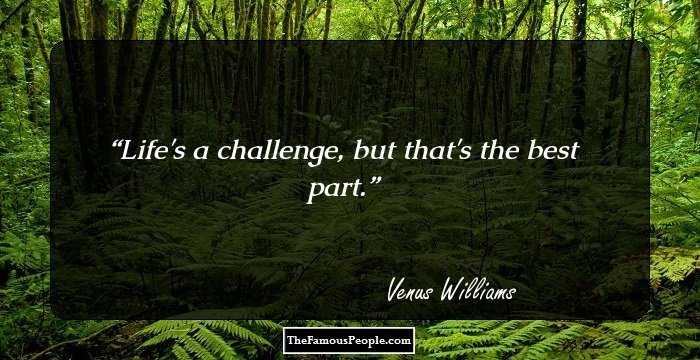 The Sexiest Men Of 2020, Ranked
Developing Years
Venus Williams played her first official game when she was fourteen years old. Though she lost the match, she was up a set and a service break against then World No. 2 Arantxa Sanchez Vicario at one point.
In 1995, Williams played three tournaments. Though she lost all the three, in the match at Oakland, she managed to beat World No 18 Amy Frazier to reach the quarterfinals.
The feat was followed in 1996 when she lost four times in the first round but managed to reach the third round in Los Angeles, before losing to World Number 1 Steffi Graf. 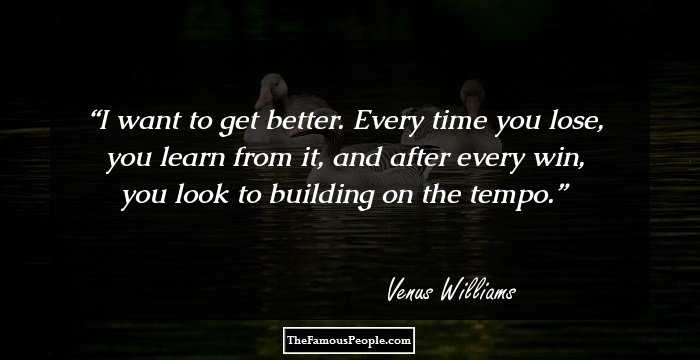 Quotes: Time
Early Career Success
Year 1997 brought with it sweet news for Williams’ as she tasted success for the first time. In the Tier I tournaments, Williams managed to reach the quarterfinals of three out of the five contest, thus winning herself a position in the Top 100.
1997 Grand Slams brought in mixed results for Williams. While she lost in the first round of Wimbledon, in the French Open she managed to reach the second round. In Australian Open, she reached till quarterfinals.
US Open was the most successful out of the other three as Williams managed to reach the finals, where she lost to Martina Hingis. For her outstanding performance, Williams climbed to 22nd position in the ATP world rankings.
Williams’ first single title win came in 1997 IGA Tennis Classic played in Oklahoma City, where she outplayed Joannette Kruger.
The Tier I tournaments in 1998 was a mixed affair; while she failed to qualify for the finals of the State Farm Evert Cup in Indian Wells, she went on to defeat then World No. 1 Hingis to reach the final of Lipton International Players Championships. With this, she secured herself 10th position in the ATP world rankings.
Continue Reading Below
Williams performance in the 1998 Grand Slams was better than her previous outings as she managed to reach the quarterfinals of all the four Grand Slam tournaments. Her prowess for the game won her the World No. 5 ranking on July 27, 1998.
Williams teamed with Justin Gimelstob for the mixed doubles at the Grand Slam 1998. While she safely secured two titles, her younger sister Serena won the other two, eventually turning the year into the ‘Williams Family Mixed Doubles Grand Slam’.
In the 1999 Grand Slams, Williams failed to reach the semi-finals of Australian Open and Wimbledon, being defeated by Davenport and Steffi Graf. However, her performance at the US Open was a fruitful one as she reached the semi-finals before losing to Martina Hingis in three sets. As for French Open, she successfully guarded her winning streak to 22 matches before losing in the fourth round to World No. 125 Barbara Schwartz.
Williams’ performance at the other tournaments in 1999 were remarkable as she played successful tennis against some of the top players of game such as Novotna, Steffi Graf, Mary Pierce, Lindsay Davenport, Monica Seles, and so on. It was due to this that she managed the World No. 3 ranking by the end of the year.
While Williams’ singles victory counts were escalating steadily, her pairing with sister Serena also paid rewarding results as the two managed to win women's doubles titles at the French Open and the US Open in the year 1999. This was, however, just the beginning as they went on to win many more titles in the category.
Phase of Dominance
Williams dominance over the game started in 2000. Though she lost the early part of year months due to wrist injury, she managed to reach the quarter finals of the French Open.
Williams went on to win 35 consecutive singles and six tournaments. Her first singles Grand Slam victory also came the same year, 2000, as she defeated Martina Hingis to win the Wimbledon. Next, Williams sisters teamed at the event to bag the women’s doubles title at the event.
Williams’ performance at the US Open was noteworthy as she outplayed then World’s Top 2 players, Hingis and Davenport to bag the title. At the Sydney Olympics, Williams brought home a gold medal, successfully beating Sanchez Vicario in the quarterfinals, Seles in the semi-finals and Elena Dementieva in the final. Williams sisters also won the Olympic gold in women’s doubles.
The brilliantly crafted year brought Williams’ six singles titles and a world ranking at No. 3.
Continue Reading Below
Year 2001 was a mirror effect in terms of success for Venus Williams. She not only managed to reach the semi-finals at the Australian Open, the sisters won the doubles title of the year, thereby completing Career Grand Slam in women’s doubles for the duo.
Her performance at the Tier II tournaments was exceptional. She managed to defeat Hingis in the semi-finals and World No. 4 Jennifer Capriati in the final. It was due to this victory that Williams rose to a career high ranking at World No. 2.
The US Open and Wimbledon of 2001 brought with it sweet fragrance of success as Williams successfully defended her title at both the games, thus becoming the only sixth woman in history to win the titles in consecutive years. She played the US Open final against Serena, which became the first Grand Slam singles final contested by two sisters during the open era.
On February 25, 2002, she attained the World No 1 ranking. Though she held the position for just about three weeks, she was the first African-American woman to ever take the prestigious position.
In the 2002 Grand Slams, Williams lost in the quarterfinals oft the Australian Open to Monica Seles. She managed to reach the finals of the French Open, US Open and Wimbledon, each time being defeated by Serena at the finals, who soon replaced Venus as the World No. 1.
The era of dominance of the Williams sisters reached another peak as they went on to win their fifth Grand Slam women's doubles title together at the Wimbledon. Williams finished the year ranked World No. 2 having won seven titles.. 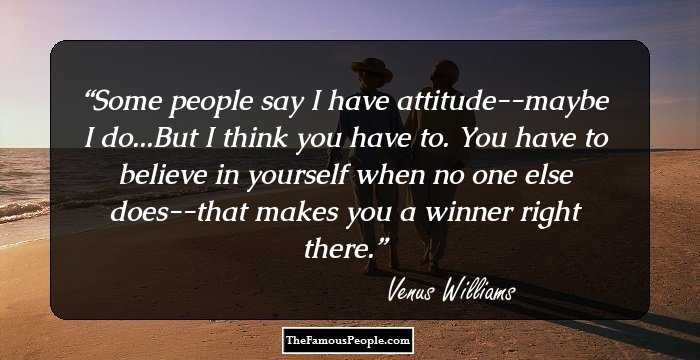 Quotes By Venus Williams | Quote Of The Day | Top 100 Quotes

See the events in life of Venus Williams in Chronological Order