Advanced Search
Andre Kirk Agassi is an American professional tennis player, who is well-known for his eight Grand Slam titles and has always been the center of attraction for his fashion sense and good looks. He first picked his tennis racket at the tender age of 2 and got into professional tennis as a teenager. In the early days of his career, he refused to participate in Wimbledon because of the white dress code and its grassy court, but later, changed his mind and went on to win several Grand Slam titles. This legendary tennis player, whose career spanned nearly two decades, has been honored with various titles and accolades and continues to be an inspiration for tennis players all around the world. He is the only tennis player to win the ‘Career Golden Slam’ and the ‘ATP Tour World Championships’. This tennis player, who is often been nicknamed as ‘The Punisher’, had to retire from tennis due to spinal problems. He was always known for his aggressive playing style with brilliant hand-eye coordination, which usually put his opponents on the defensive. Also a philanthropist, he also established a foundation to help the children in different parts of the world. Scroll further for more. Venus Williams
DID WE MISS SOMEONE?
CLICK HERE AND TELL US
WE'LL MAKE SURE
THEY'RE HERE A.S.A.P
Quick Facts 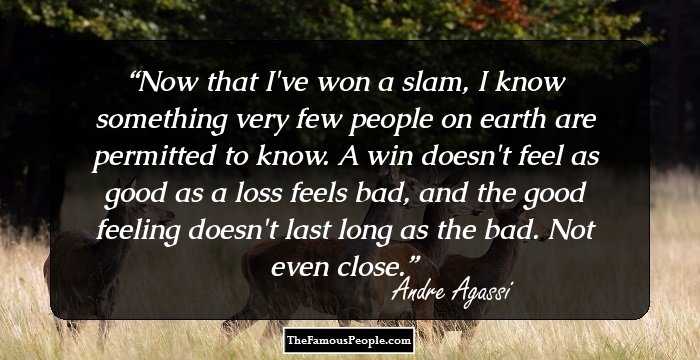 Quotes: I
Continue Reading Below
Career
In 1986, at the age of 16, he became a professional tennis player and played at La Quinta, California.
In 1987, he tasted success for the first time at Sul American Open in Itaparica, after which he was ranked World No. 25. This was followed by six wins in 1988, which confirmed his place in the world of tennis.
In 1990, the United States won Davis Cup after 8 years and Agassi was part of the winning team. In the same year he won the prestigious, ‘Tennis Masters Cup’.
After losing three Grand Slams finals—French Open (1990, 1991) & U.S. Open (1990)—he was severely criticized for his performances, but in 1992 he silenced his critics by winning his first Grand Slam Title by defeating Goran Iranisevic in Wimbledon final.
In 1993, he won his first and only doubles title, while playing with Petr Korda at the ‘Cincinnati Masters’ event.
In the 1994 US Open, after his wrist-surgery, he became the first ‘unseeded’ player to win the Grand Slam, beating Michael Stich in the final.
For the first time in his career, after winning the 1995 Australian Open, he rose to the rank of World No. 1. In 1995, he won three ‘Master Series’ event and seven titles.
The highlight of 1996, though not a very good year for Agassi otherwise, was the gold medal which he won in men’s singles at the ‘Olympic Games’ in Atlanta.
His career went through a slump in 1997 and he played only 24 matches owing to recurring wrist injuries. Due to this problem, his rankings plummeted from no. 1 to no. 141.
Continue Reading Below
In 1998, his career turned for the better after playing in the ‘Challenger Series Tournaments’. His ranking rose to world no. 6 and in 1999, he also won two Grand Slams—the French Open and the U.S. Open.
He won the Australian Open tournament for three years; 2000, 2001 and 2003. In 2003 he won his eighth and final Grand Slam title.
In 2006, he was recovering from an ankle injury and was also suffering back and leg problems, due to which he couldn’t play for a while.
On September 4, 2006, though he lost his last match to Benjamin Becker of Germany at the U.S. Open, he received a standing ovation for his long and brilliant career in tennis.
Post-retirement, he played for the ‘Philadelphia Freedoms’ and also the ‘Cancer Treatment Centers of American Tennis Championships’. 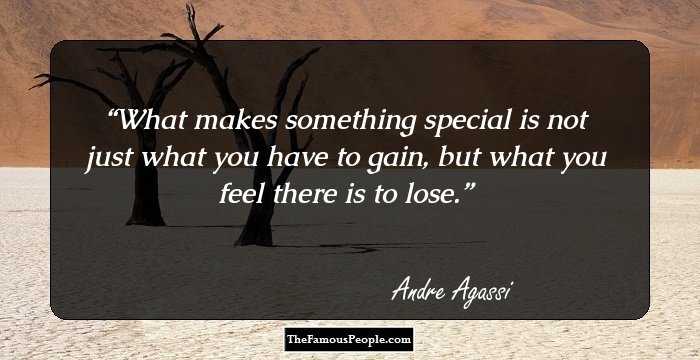 Quotes: You
Awards & Achievements
In 1988, he was named ‘The Most Improved Player of the Year’ by ATP and ‘Tennis’ magazine.
In 1992, he was named the ‘BBC Overseas Sports Personality of the Year’.
He was listed in the ‘Sports Illustrated’ as the 7th greatest player of all time in 2010.
Continue Reading Below
In 2011, he was inducted into the ‘International Tennis Hall of Fame’ in Rhode Island.
His autobiography bagged the No.1 slot on the ‘New York Times Best Seller list’ and also won the ‘British Sports Book Awards’ in 2010.
He has won eight Grand Slam Tournaments: Australian Open (1995, 2000, 2001, 2003), French Open (1999), Wimbledon (1992), U.S. Open (1994, 1999).
Personal Life & Legacy
In 1994, he founded the ‘Andre Agassi Charitable Association’ that helps the needy and young people in Las Vegas, for which he was awarded the ‘ATP (Association of Tennis Professionals) Arthur Ashe Humanitarian Award’ in 1995.
In 1997, he married actress Brooke Shields but the couple got divorced nearly two years later.
On October 22, 2001, he got married to the famous professional tennis player, Steffi Graf and the couple has two kids.
He wrote his autobiography ‘Open’ which was published in 2009. 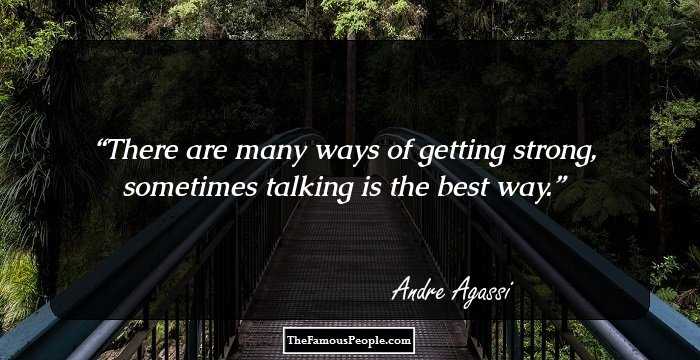 Trivia
The year 1995 was this tennis player’s best year because of a total of 73 wins and 9 losses.
He is the only other American male tennis player, besides Don Budge, to have won the ‘Career Golden Slam’, which is achieved when a player wins all four Grand Slam tournaments as well as the Olympic Gold medal.

Quotes By Andre Agassi | Quote Of The Day | Top 100 Quotes

See the events in life of Andre Agassi in Chronological Order