(One of the Greatest Tennis Players of All-Time)

Serena Williams is one of the most renowned and established names in the world tennis circle. Immensely talented and skilled player, she throws away a power packed performance every time she is in the tennis court and leaves her opponents spell bounded. In her career spanning two and a half decades, she first gained the world no 1 ranking in 2002 and later regained the same on five more occasions. In her career so far, she has won 39 Grand Slam titles: 23 in singles, 14 in women's doubles, and 2 in mixed doubles. In 2002-03 and 2014—15, she achieved the rare feat of holding all the four Grand Slam titles simultaneously. What gives her the edge over other players of her generation is her fastest power-packed serve, followed by forceful groundstrokes from both her forehand and backhand swings and aggressive high playing style. She is also known for her mental toughness and her ability to strike back when the chips are down. The Williams sisters have changed the face of women's tennis with their power play and athleticism. Serena Williams is considered among all-time great women tennis players. American People
Black Sportspersons
Black Tennis Players
American Women
University Of Massachusetts Amherst
Childhood & Early Life
Serena Williams was born on 26 September 1981, in Saginaw, Michigan, to Richard Williams and Oracene Price. She was the youngest among the five siblings, all sisters. She had three half-sisters Yetunde, Lyndrea, and Isha Price from her mother's side and one full-sister Venus Williams.
A prodigious child, young Williams took to playing tennis at the age of four along with her sister Venus Williams. Soon thereafter, they attended the tennis academy of Rick Macci, who polished their in-born skills and talent.
By 1991, she had scored 46-3 on the United States Tennis Association Junior Tour and ranked first in the 10-and-under division. The family moved to Florida. However, her father pulled the sisters out of playing tennis, with a view that the demanding schedule may burn them out too quickly. 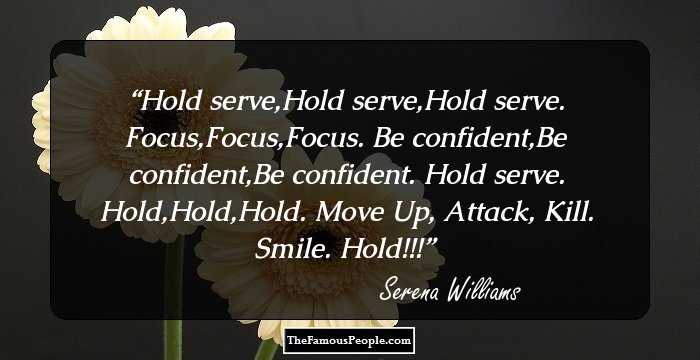 Continue Reading Below
Career
In 1995, she turned to become a professional tennis player. Starting from the 304 rank, she zoomed up her way to make place for herself in the top 100, at the 99th rank, beating world No. 7 and world No. 4, before losing the semi-finals to world no. 5.
Year 1998 started what became a legacy in her tennis playing career as she recorded a victory at the mixed doubles titles at Wimbledon and the US Open. The sisters went on to win two more doubles titles. She finished the year ranking at the 20th spot.
In 1999, she partnered with her sister to record a victory at the doubles in the French Open & Us Open. Furthermore, she outplayed Martina Hingis to emerge as the winner in the finals of the US Open Grand Slam singles tournament, thus becoming the second African-American woman ever to record the victory. She ended the year with the world no. 4 ranking.
In 2000, the William sisters not only won their first Wimbledon title, but teamed up for their first victory at the Sydney Olympics, wherein they bagged a gold medal in doubles. In the following year, they created history by winning the doubles title in the Australian Open, thus becoming the fifth doubles team to win all four Grand Slam women's doubles titles. She lost the US Open to her sister Venus in the finals. By the end of the year, her ranking stood at world no. 6.
The year 2002 was a spectacular year for Serena as she went on to win the French Open, the Wimbledon and the U.S Open. In the finals of all these three Grand Slam championships, she defeated her sister Venus Williams. As a result of these victories, she bagged the world no. 1 ranking, dethroning her sister from the top spot. She paired up with Venus Williams to win the women's doubles title at Wimbledon.
In 2003, she won the Australian Open, and once again she defeated her sister in the finals. By winning the Australian Open, she became only the fifth woman to achieve the rare feat of holding all the Grand Slam singles titles simultaneously. The others to achieve this feat were Maureen Connolly Brinker, Margaret Court, Steffi Graf and Martina Navratilova. This feat was hailed as 'Serena Slam’ by the press. She also won the doubles titles at the Australian Open in partnership with her sister.
The super-successful career graph met with a resounding halt as she succumbed to injuries which took a toll on her performance for a couple of years. She could neither defend her title nor her world ranking as she slipped past the world top 10.
Year 2007 marked the year of revival as she came over her physical, psychological and emotional pressure to record a victory at the Australian Open against Maria Sharapova, her third Australian Open and eighth Grand Slam singles title overall. By the end of the year, she scaled to the world number seven rank.
Working her way through the tournaments, she went on to record a victory at the 2008 US Open singles tournaments, outplaying Jelena Jankovic. She emerged as the runner up in the Wimbledon singles tournament against her sister. In the same year, she partnered with her sister to record a victory at the Wimbledon doubles tournament. Additionally, the duo won a gold medal at the Olympics too. She ended the year at world no. 2 and four singles titles, her best ever since her comeback.
Continue Reading Below
Year 2009 saw the sisters bag all the limelight as they went on to record a victory at the Wimbledon, the US Open and the Australian Open doubles tournament. The same year, she outplayed Dinara Safina at the Australian Open and her sister at the Wimbledon to get hold of the two singles title as well. She won five Grand Slam titles, putting her total Grand Slam titles at 23. She finished the year at world no. 1 rank, for the second time in her career
The sisters repeated their success streak at the 2010 the Australian Open and the French Open, thus defending their titles. They, however, lost the Wimbledon title. As for her singles victory, she outperformed Justin Henin and Vera Zvonareva at the finals of the Australian Open and the Wimbledon. She ended the year ranked no. 4 in singles, despite having played only six tournaments.
In 2011, she took a break, following a series of health issues as doctors found a blood clot in one of her lungs. Due to the same, she kept away from playing tennis for several months.
Not the one to remain idle for long, she returned to the court in 2012 and recorded a victory each at the Wimbledon and US Open singles tournament. She even went on to win the singles gold medal at the 2012 Olympics games. The same year, she paired with her sister to win the doubles title at the Wimbledon.
In 2013, she outclassed Maria Sharapova and Victoria Azarenka to record a victory at the French Open and the US Open singles tournament. With this, she became the oldest US Open champion. Additionally she became the oldest person to win the WTA Championships and the fourth player to win the event four times or more.
In 2015, she defeated Maria Sharapova to win her 6th Australian Open singles title. She then went on to win the French Open and Wimbledon and thereby completed her second 'Serena Slam' (holding all four Grand Slam titles simultaneously)
In 2016, she lost to Angelique Kerber in the final of the Australian Open. In the French Open too, she lost in the finals. She bounced back to win the Wimbledon and equaled Steffi Graf's record of 22 Grand Slams in the Open Era. In the U.S Open, she lost to Karolína Plíšková in the semifinals and in the process lost her No. 1 ranking.

The year 2017 started on a promising note for Serena Williams. She defeated her sister Venus Williams to win the Australian Open. It was the 23rd Grand Slam singles title of her career. Later it was revealed that she was eight-weeks pregnant when she won the Australian Open. On account of her pregnancy, she took a break from tennis.

Serena Williams made her grand slam comeback with the 2018 French Open. She reached the fourth round but withdrew due to an injury. In July 2018, she entered the Wimbledon Championships; she reached the final of the tornament, but lost in the final to Angelique Kerber of Germany.

Serena Williams entered the 2019 Australian Open after skipping the previous edition. She, however, lost in the quarterfinals to Karolína Plíšková. In August-September 2019, she entered the US Open, where she surprised everyone by her performance. She reachedthe final, where she faced 15th seed Bianca Andreescu, who defeated Serena in a close-fought match.

In the 2020 Australian Open, Serena marched to the third round, but lost to Wang Qiang in three tight sets. In the 2020 US Open, she advanced into the semifinals, where she lost to Victoria Azarenka in three sets. In the 2020 French Open, Williams withdrew before her second round match due to an achilles injury.

In the 2021 Australian Open, Serena advanced to the semifinal after defeating Simona Halep and Aryna Sabalenka, but lost to the 4th seed, Naomi Osaka.

Apart from playing tennis, she has expanded her brand power to films, television and fashion. She starred and did voice roles for a couple of television shows and also appeared on the cover pages of various magazines. She launched her own line of clothing, ‘Aneres’ in 2004 and her signature collection of handbags and jewellery
The sisters have also come up with a couple of publications. They penned their first book, titled ‘Venus & Serena: Serving From The Hip: 10 Rules For Living, Loving and Winning’ along with author Hilary Beard in 2005. In 2009, she released her first solo autobiography entitled ‘On the Line’ 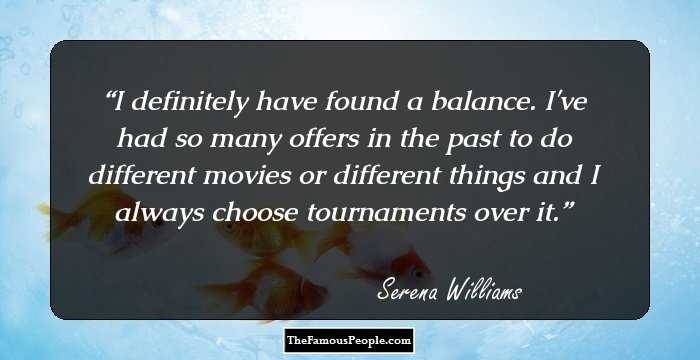 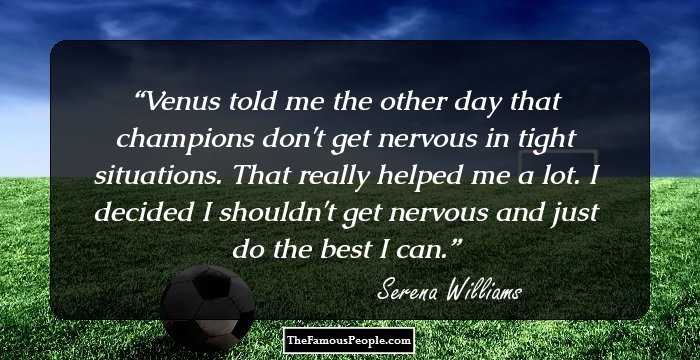 Quotes: Me
Trivia
She is allergic to peanuts

Quotes By Serena Williams | Quote Of The Day | Top 100 Quotes

See the events in life of Serena Williams in Chronological Order