Advanced Search
John McEnroe is a former world number one American professional tennis player. Distinguished for his dominant personality as well as his fantastic performance in the tennis court, he is considered by many as one of the greatest players in the game’s history. A holder of seventeen ‘Grand Slam’ titles including seven singles, nine men's doubles and one mixed doubles, McEnroe is reputed for his volleying skills and shot-making finesse. He bagged 19 ‘Grand Prix Super Series’ titles in his career and holds a record of winning eight year-end championships. Throughout his career he won 77 ATP-listed singles titles and 78 doubles titles and had an amazing record of winning 856 singles. The best singles season win rate of ‘open era’ was match record of 82-3 that he achieved in 1984. He became both the ITF World Champion for Men's singles and also the ATP player of the year thrice in his career in 1981, 1983 and 1984. He captained the US team for ‘Davis Cup’ and also remained a player of US ‘Davis Cup’ winning team for five times. However his on-court tirade hurled on ball boys, chair umpires and line judges and confrontational behavior became a common phenomenon which often created conflict with tennis authorities. In 1999 he was enlisted in the ‘International Tennis Hall of Fame’. Post retirement from professional tennis he featured as himself in many television programs and movies and became TV commentator and host of a game and a chat show. Andre Agassi
DID WE MISS SOMEONE?
CLICK HERE AND TELL US
WE'LL MAKE SURE
THEY'RE HERE A.S.A.P
Quick Facts

American People
American Men
Male Sportspersons
Male Tennis Players
American Sportspersons
Childhood & Early Life
He was born on February 16, 1959, in Wiesbaden, West Germany, in the family of John Patrick McEnroe, Sr. and Kay, née Tresham as eldest of their three sons.
During that time his father was serving the United States Air Force and was stationed in Wiesbaden. His mother worked as a surgical nurse there.
The family returned to the US and settled in Douglaston, Queens, New York in 1960. His father began to work as advertising agent during daytime and attended ‘Fordham Law School’ by night.
McEnroe was enrolled at famous ‘Trinity School’ of New York where he fitted well with other students and would often display his sharp wit.
He showed up his dexterity in sports whether basketball, soccer or tennis from an early age. At eight years of age he began to play tennis along with his brothers Mark and Patrick at ‘Douglaston Club’. Patrick also went on to become a renowned professional tennis player.
McEnroe was enrolled at ‘Eastern Lawn Tennis Association’ at nine by his parents and soon began to participate in regional tournaments. Gradually he became more focussed on tennis and seemed to display a natural flair on the court.
He came in contact with Harry Hopman, a one-time coach of Australian ‘Davis Cup’ team and Tony Palafox, a Mexican player who played in ‘Davis Cup’. The duo took him as a student of ‘Port Washington Tennis Academy’ in Long Island, New York when he was twelve. However at sixteen he was suspended from the academy due to his pranks.
Thereafter his parents enrolled him at ‘Cove Racquet Club’ where his coach Tony Palafox went along to work on the promising star. 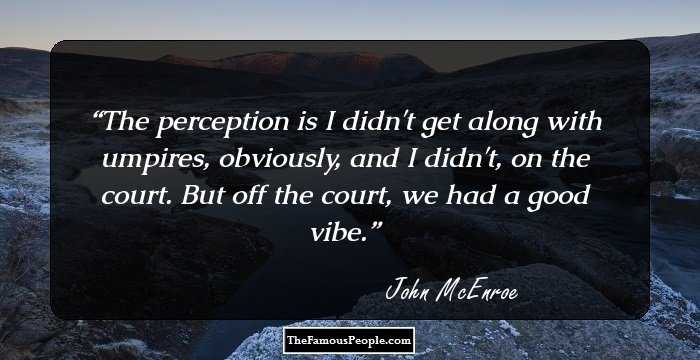 Continue Reading Below
Career
He completed his graduation in 1977. That year was marked with a series of significant events in his career. The 18 year old young lad won the ‘French Open’ mixed doubles title with partner Mary Carillo. He then eyed for the junior ‘Wimbledon’ title but shifted gears and qualified for the men’s tournament. The otherwise amateur McEnroe surprised all by reaching the ‘Wimbledon’ semi-finals but he was beaten by Jimmy Connors.
He earned a tennis scholarship and went back to the US and entered ‘Stanford University’ in California.
In 1978 he emerged winner of the singles title of ‘National Collegiate Athletic Association’ championship and was also a part of his school team, the ‘Cardinals’, winning the team title. He turned pro that year and signed professional endorsement deal with Sergio Tacchini and entered the ATP tour. He won 5 titles that year which included his first ‘ATP World Tour Finals’.
In 1978 he remained a player of the US ‘Davis Cup’ team that secured the cup after 1972. He was also part of the winning teams in 1979, 1981, 1982 and 1992. He played an important role in reviving passion and enthusiasm of the US teams for the ‘Davis Cup’ in that era and remained a mainstay of US ‘Davis Cup’ teams for 14 years in succession.
In 1979 he achieved two ‘Grand Slam’ men’s doubles titles along with his American partner Peter Fleming, first ‘Wimbledon’ and then ‘US Open. His partnership with Fleming saw him winning the ‘Wimbledon’ title three more times in 1981, 1983 and 1984 and the ‘US Open’ in 1981 and 1983. He won his final ‘US Open’ doubles title with Mark Woodforde in 1989 and that of ‘Wimbledon’ with Michael Stich in 1992.
He also triumphed in attaining his first ever ‘Grand Slam’ singles title defeating his buddy Vitas Gerulaitis at the ‘US Open’ in 1979. He tasted success at the season-ending WCT Finals defeating Björn Borg. A total of 27 titles of McEnroe that year including 10 singles and 17 doubles created an ‘open era’ record.
His feats continued in the following years as well. He went on to win the ‘US Open’ singles titles as defending champion knocking out Björn Borg in two consecutive years in 1980 and 1981 and again won the title for the final time in 1984 defeating Ivan Lendl.
On March 3, 1980, he attained World No. 1 rank as a singles player.
His first ‘Wimbledon’ men's singles final against Björn Borg, who was eyeing for a fifth consecutive ‘Wimbledon’ title and succeeded in reclaiming it, was considered the greatest match ever played during that era. However in 1981 McEnroe triumphed in beating the five time defending champion Björn Borg to win his first ‘Wimbledon’ singles title. Again in 1983 and 1984 he regained the title defeating Chris Lewis and Jimmy Connors respectively.
Continue Reading Below
His other achievements included two more consecutive ‘ATP World Tour Finals’ singles titles in 1983 and 1984 and ‘WTC’ singles titles in 1981, 1983, 1984, 1989.
In late 1992 he retired from professional tour with world ranking of 20 in singles. However he continues to make his presence felt in tennis as a mainstay on the Seniors Tour and also as a tennis broadcaster, a career that he kicked off in 1995.
In 1994 ‘John McEnroe Art Gallery’ was launched by him in New York to promote upcoming artists.
In September 1999 he became captain of the US ‘Davis Cup’ team but resigned in November 2000.
His other endeavours post retirement includes writing songs; forming ‘The Johnny Smyth Band’ where he became lead singer and guitarist; playing guitar for bands like ‘Noise Upstairs’ and ‘Package’; featuring as himself in films like ‘Mr. Deeds’ (2002), ‘Wimbledon’ (2004) and ‘Jack & Jill’ (2011) and TV series like ‘Arliss’ (1996) and ‘Parkinson’ (2006). 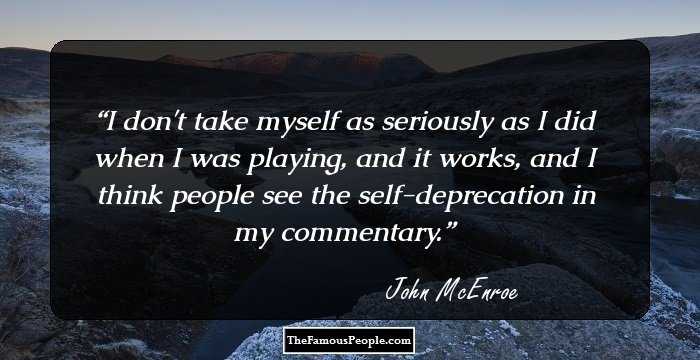 Quotes: Think
Personal Life & Legacy
He married Oscar-winning actress Tatum O'Neal on August 1, 1986 and had three children with her. They divorced in 1994.||P
In April 1997 he married American singer and songwriter Patty Smyth. He has two daughters with her and a stepdaughter from Smyth’s first marriage.||P
Humanitarian Work
He played for many charitable causes including the ‘Arthur Ashe Foundation’ that fights against ‘AIDS’ 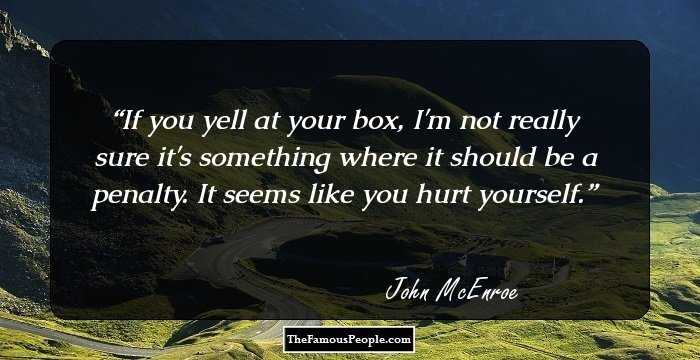 Quotes By John McEnroe | Quote Of The Day | Top 100 Quotes

See the events in life of John McEnroe in Chronological Order