Arthur Christopher Benson was an accomplished English author, poet and essayist. A number of his ghost stories have also been published along with stories of the same genre created by his illustrious brothers, Edward Fredric Benson and Robert Hugh Benson. But, he is best known as the author of a particular British patriotic song, ‘Land of Hope and Glory’. He lived closed to a renowned Cathedral as his father was the Archbishop of Canterbury. Perhaps this brought out the ecclesiastical influence in his life. Though marred by spells of deep depression right from childhood to his last years, A. C. Benson was a distinguished academic, who became the 28th Master of Magdalene College at Cambridge. His notable works include ‘The Upton Letters’ and ‘From a College Window’. As he was also a notable biographer - he co-edited Queen Victoria’s letters. However, A. C. Benson is renowned for his diary entries that he had recorded in about 180 notebooks. The author was a Fellow of the Royal Society of Literature in Britain, and founded the Benson Medal to honour most meritorious works in fiction, poetry, history and “belles-lettres”. Also Known As: A. C. Benson

Quotes By A. C. Benson Poets

British Celebrities
Essayists
British Men
Eton College
Male Poets
Childhood & Early Life
Arthur Christopher Benson was born to Edward White Benson and Mary Sidgwick, at Wellington College in Berkshire. He had five other siblings, two of whom died at a young age.
His father was the headmaster of Wellington College at the time of his birth, and later became the Archbishop of Canterbury. He lived at Lincoln and Truro from the age of 10 to the age of 21, so his early years were influenced heavily by Christianity.
He was an illustrious academic, and studied at Eton College in 1874, thanks to a scholarship he had received from Temple Grove School in East Sheen. He later went to King’s College at Cambridge in 1881. However, his life was scarred by dreadful spells of depression right from a young age. 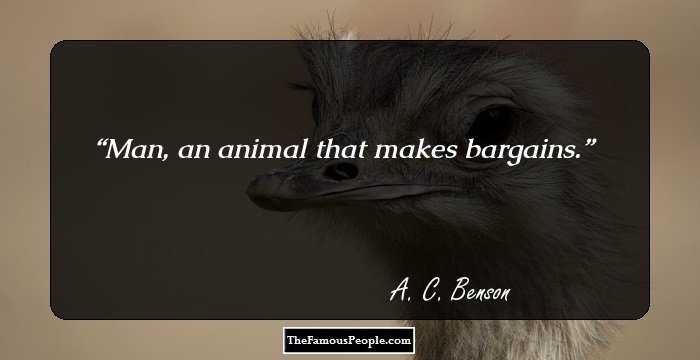 Who Is The Most Popular BTS Member?
Career
After taking a first in the Classical Tripos at Cambridge in 1884, A. C. Benson came back to Eton as a teacher in 1885.
He was a biographer, essayist, author and poet, who completed the two-decker biography of his father, the Archbishop of Canterbury, in the year 1899.
He continued with his stint as a schoolmaster till 1903, after which he left Eton.
He, along with Viscount Esher, edited Queen Victoria’s correspondences, which was published in 1907.
Invited by his old friend and the-then Master, S. A. Donaldson, Benson became the fellow of Magdalene College at Cambridge in 1904.
He was elected as the president of Magdalene College in 1912 and then went on to become ‘Master of Magdalene’ in 1915. He held on to this post till his death, and brought about immense changes to the college which took wings under his able leadership.
His prolific writing skills were only overpowered by his wonderful leadership skills. When he became the Master of Magdalene College in 1915, it was not in its best shape. The author took it upon himself to give form to a ‘New Magdalene’.
Well-known for his lively ways of teaching, he encouraged others to pursue subjects like archaeology, music and science, in addition to history and English. He was very famous with the young undergraduates as a friendly and understanding teacher. 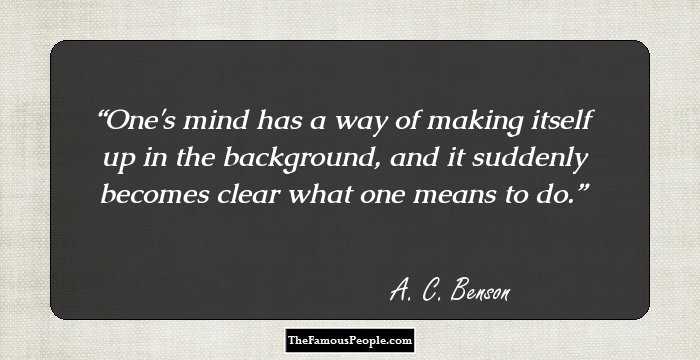 Continue Reading Below
Major Works
This gifted poet’s poems and essays like “The Upton Letters” and “From a College Window” stand witness to his creative writing skills and were well-appreciated in his times.
He had the amazing habit of penning down elaborate diary entries right from 1897 till his death in 1925. It is interesting to note that his diary ran into about 180 notebooks. A part of these diaries, which give an insight into the life and times of Benson, have been published.
The poet is still remembered for writing the renowned patriotic song ‘Land of Hope and Glory’, composed by Elgar as King Edward VII’s coronation ode. It was performed on every closing night of the London Proms at the Royal Albert Hall till 2001.
Awards & Achievements
Having edited Queen Victoria’s letters in three volumes in 1903, the author-biographer was made the commander of the Royal Victorian Order. 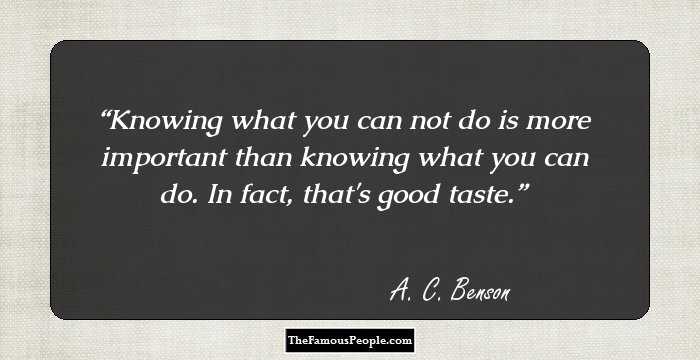 Quotes: You
Personal Life & Legacy
This gifted writer never married and remained single all his life.
The Benson Medal was instituted in 1916 to be awarded by the Royal Society of Literature in the United Kingdom by the author himself, who was also a Fellow of the Society. It is awarded to those writers who come up with commendable works in poetry, history, fiction and “belles-lettres”, even if their works are in other languages.
The poet-biographer died of heart attack in Magdalene College, and is buried at Cambridge.
Trivia
This author-poet was the brother of famous Egyptologist, Margaret Benson.
Giving vent to his impressive flair for writing, this biographer-essayist wrote about four million words in his massive diaries. It could be said that his diaries are one of the longest ever.
You May Like

See the events in life of A. C. Benson in Chronological Order