Alfred Edward Housman, better known as A. E. Housman, was an English classical scholar and poet regarded as one of the greatest scholars of all time and one of the foremost classicists of his age. His poems were marked by a romantic pessimism which he expressed in a simple and lucid style. His best known work is the cycle of poems ‘A Shropshire Lad’ which reflected his deep pessimism and obsession with death. His pessimism is often attributed to the untimely death of his mother when he was just 12. Another reason for the sadness and loneliness in his life was the fact that he was homosexual and deeply in love with a man who could not reciprocate his feelings. He attended the Oxford University to study classics but could not pass his examination owing to the constant emotional turmoil he found himself in. Nevertheless, he continued studying classical texts in Latin privately and wrote articles for journals. His mastery of the language despite not having a university degree led to his appointment as a Professor of Latin at the University College London. Although famous as a poet, he considered himself to be a Classicist, a Latinist, and regarded poetry as a secondary activity. Rupert Brooke
Poets #100
Writers #682
26th March In History
DID WE MISS SOMEONE?
CLICK HERE AND TELL US
WE'LL MAKE SURE
THEY'RE HERE A.S.A.P
Quick Facts

Quotes By A. E. Housman Poets

British Celebrities
British Men
Aries Poets
Male Poets
Male Writers
Childhood & Early Life
He was born as the eldest son to Sarah Jane and Edward Housman in a hamlet in Worcestershire. He had six younger siblings. Two of his siblings also became writers.
His mother died of cancer on his 12th birthday, an incident that became a major source of his pessimism in life. His father later remarried.
He went to King Edward’s School for his primary education and later attended Bromsgrove School. He developed a strong interest in academic studies and poetry even as a high school student.
He won a scholarship to St John’s College, Oxford, to study classics. He immersed himself in textual analysis and was drawn to the works of Propertius which was not part of his curriculum. As a result, he ignored his curriculum and failed in the final examinations. 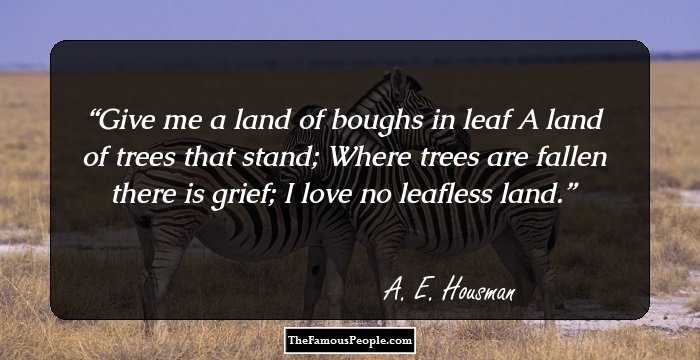 Quotes: Me, Love
Continue Reading Below
You May Like

Famous Beautiful Women With Green Eyes
Career
Housman got a job as a clerk in the Patent Office in London after leaving Oxford. He continued to pursue classical studies in Latin privately, and wrote scholarly articles for journals.
He had acquired such mastery of the language through self-study that in 1892, he was appointed as a professor of Latin at the University College London.
He published his first volume of poetry, ‘A Shropshire Lad’, which was a cycle of 63 poems, in 1896. The poems reflected Housman’s characteristic pessimism and obsession with death.
He had a profound interest in redaction, and found immense satisfaction in correcting scribal errors in classical texts. He published his critical edition of Manilius’s Astronomicon in five volumes from 1903 to 1930. Even though other poets have also published their editions, his edition is considered to be authoritative.
He translated and edited Juvenal’s ‘Satires’, a collection of satirical poems written by the Latin author in the 1st and 2nd centuries AD. Housman’s version was published in 1905.
Initially, Housman’s works were in both Latin and Greek but later in his career he began to focus only on Latin poetry. He was offered the Kennedy Professorship of Latin at Trinity College in 1911. He accepted it and remained there for the rest of his life.
He published his second and last volume of poetry, ‘Last Poems’ in 1922. His closest friend and the only love of his life, Moses Jackson was dying in Canada and Housman wanted to publish the best of his previously unpublished poems for him to read. 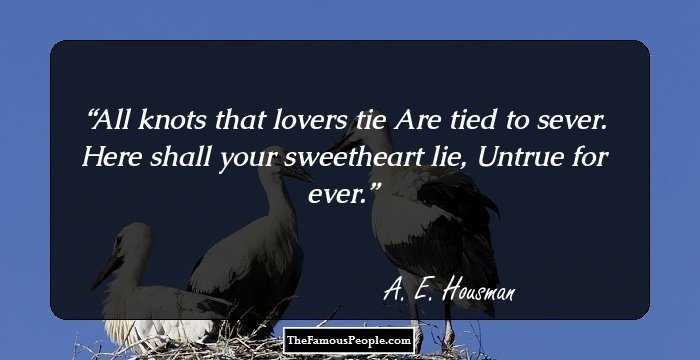 Major Works
His first volume of poetry, ‘A Shropshire Lad’, a collection of poems dealing with loss, loneliness and death, is the best known of all his works. The volume was published in 1896 and included poems like ‘To an Athlete Dying Young’, and ‘Loveliest of Trees, the Cherry Now.’ It became a bestseller.
He published a collection of the best of his previously unpublished poems in 1922 for his closest friend who was dying of cancer. It was the second and last of the poetry volumes he published in his lifetime.
He edited the ‘Astronomicon’, a poem written by Marcus Manilius, a Roman astrologer and poet in the 1st century A.D, and published his edition in five volumes starting from 1903 to 1930. Even though other poets have also published their editions, Housman’s edition is considered the most authoritative.
Personal Life & Legacy
Housman was a homosexual and as a college student he fell in love with fellow student Moses Jackson. But Moses could not reciprocate Housman’s feelings even though they remained friends.
He died in Cambridge at the age of 77. 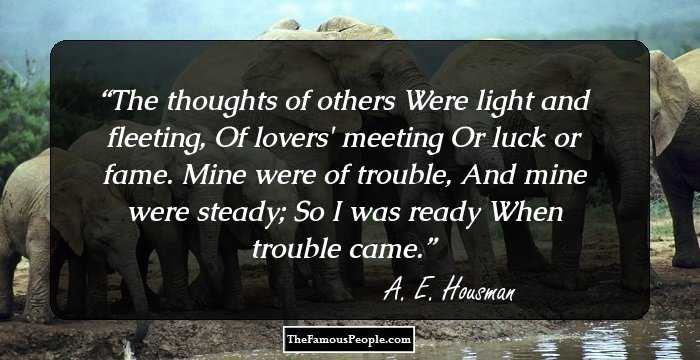 Quotes: I
Trivia
Many of his works were published posthumously by his brother Laurence.
Tom Stoppard’s 1997 play ‘The Invention of Love’ is based on his life.
A building in the University of Worcester is named after him.
You May Like

See the events in life of A. E. Housman in Chronological Order