Known to most Americans as the author of the bestseller, ‘Kitchen Confidential: Adventures in the Culinary Underbelly’, Anthony Bourdain was more than a famous chef-cum-author. He became a household name with the success of the book which led to offers to host television programs. In the travel and food show ‘A Cook’s Tour’, aired on Food Network, he traveled to several exotic locations all over the world in search of the perfect meal. The popularity of this show, in turn, resulted in the ‘Anthony Bourdain: No Reservations’ show on the Discovery Traveling and Living Channel. He also served as a judge on the cookery competition reality show, ‘Top Chef’ on several seasons, once judging the episode on exotic ingredients like alligator, abaloe and eel. The world famous chef was nothing like other celebrity chefs who were well-dressed, cheerful and polite—on the contrary, he was blunt and liberal in his usage of offensive language. He was a big time drinker and smoker and unabashedly candid about his past addiction to cocaine, heroin and cannabis. The bold cook also courted controversy by openly criticizing celebrity chefs like Paula Deen, Sandra Lee and Alice Waters. He was also notorious for his negative comments on vegetarianism and veganism. American Celebrities
Writers
American Men
Vassar College
Tall Celebrities
Childhood & Early Life
Anthony Bourdain was born to Pierre and Gladys Bourdain. His mother worked as an editor for The New York Times.
He went to the Dwight Englewood School for boys and graduated in 1973.
He enrolled at Vassar College but dropped out after two years to pursue a career in cooking.
He attended the Culinary Institute of America and graduated in 1978. 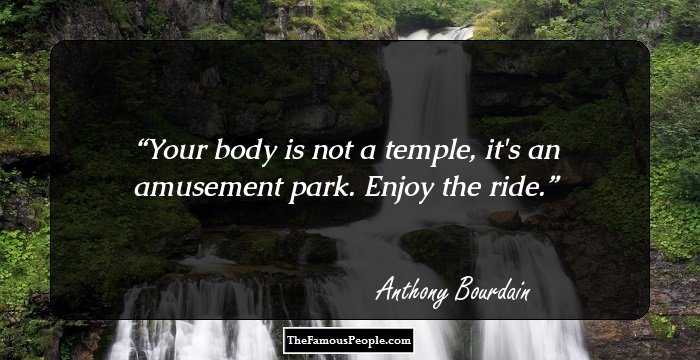 The Best Black Actresses Of All Time
Career
He worked at various restaurants like Supper Club, One Fifth Avenue and Sullivan’s in New York for years before finally getting the position of executive chef at Brasserie Les Halles in 1998.
He published his first book, ‘Kitchen Confidential: Adventures in the Culinary Underbelly’ in 2000. He revealed the details of the inner working conditions of kitchens in restaurants in this book which became a bestseller.
The success of his book led to an offer to host a travel and food show on the Food Network. In ‘A Cook’s Tour’, he visited exotic locations worldwide and tried out the local foods. The show ran for two seasons in 2001 and 2002.
He published ‘A Cook’s Tour: Global Adventures in Extreme Cuisines’ in 2001 in which he wrote about his travels to different places and his experiments with exotic cuisines.
In 2005, he hosted another travel and food show, ‘Anthony Bourdain: No Reservations’ on the Travel Channel. It had a format similar to ‘A Cook’s Tour’ in which Anthony visits countries all over the world and samples local cuisine.
His book ‘The Nasty Bits: Collected Varietal Cuts, Usable Trim, Scraps, and Bones’ was brought out in 2006. It is a collection of 37 humourous essays and anecdotes centered on food, plus a short fictional piece.
Published in 2007, ‘No Reservations: around the World on an Empty Stomach’ was written as companion to the television show of the same name and contains material from the past seasons of the show.
His most recent book, ‘Medium Raw: A Bloody Valentine to the World of Food and the People Who Cook’ was published in 2010. It was meant to be the follow-up to his debut book, ‘Kitchen Confidential’.
Travel Channel show ‘The Layover’, hosted by him, premiered in 2011. The show highlights what a traveler to a particular city can visit, eat and enjoy within a day or two.
Continue Reading Below
His latest show was ‘Anthony Bourdain: Parts Unknown’, a CNN show which was first aired in April 2013. In the show, Anthony travels to lesser known places around the world.
He judged several seasons on the cookery competition reality show ‘Top Chef’ as a guest judge. He served as one of the main judges on the ‘Top Chef All Stars’.
He also wrote essays and articles for various newspapers and magazines like The New York Times, Gourmet, Maxim and Town & Country. 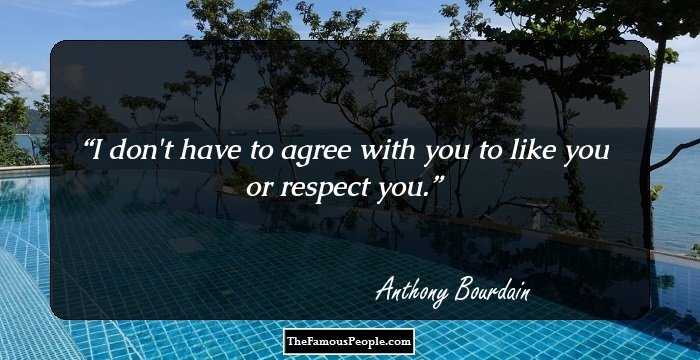 Quotes: You, Like, I
Major Works
He was famous for authoring several bestselling non-fiction books like ‘Kitchen Confidential: Adventures in the Culinary Underbelly’ and ‘A Cook's Tour: In Search of the Perfect Meal’.
A much sought after host of food and travel shows, his shows ‘A Cook's Tour’, ‘Anthony Bourdain: No Reservations’, and ‘Anthony Bourdain: Parts Unknown’ were considered his major achievements.
Awards & Achievements
The Bon Appetit magazine named him the Food Writer of the Year in 2001 for ‘Kitchen Confidential’.
His show ‘Anthony Bourdain: No Reservations’ won the Creative Arts Emmy Award for Outstanding Cinematography for Nonfiction Programming in 2009 and 2011. 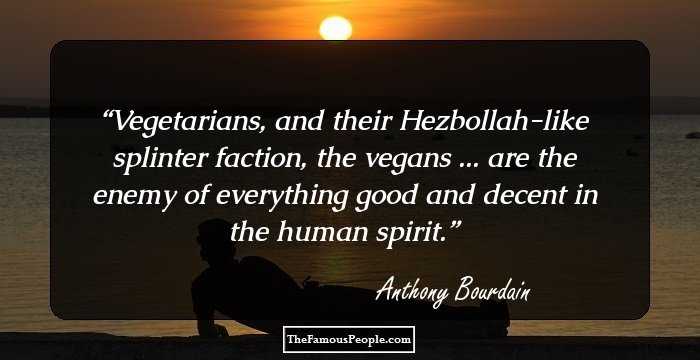 Personal Life & Legacy
Anthony Bourdain married his high school girlfriend, Nancy Putkoski, in 1985. The marriage lasted for 20 years and ended in a divorce in 2005.
He married Ottavia Busia on April 20, 2007. Together, the couple had a daughter named Ariane, born in 2007. They divorced amicably in 2016.
Anthony Bourdain committed suicide on June 8, 2018, in his hotel room in Strasbourg, France. At the time of his death, he was working on an episode of his CNN show “Parts Unknown”.
He was against the practices of vegetarianism and veganism.
Trivia
He was once addicted to heroin, cocaine and LSD.
He appeared in a cameo in one episode of ‘The Simpsons’ in 2011.
He is said to have eaten a whole cobra once.
You May Like

Quotes By Anthony Bourdain | Quote Of The Day | Top 100 Quotes

See the events in life of Anthony Bourdain in Chronological Order