Alexander Berkman was a well-known anarchist who led an avant-garde movement in the U.S. He was a part of a principal Jewish anarchist group, ‘Pioneers of Liberty’. He was given 22 years prison sentence on the charge of his attempted murder of a factory manager. He attempted to unite working class to organize a revolution against the capitalist system. Due to his failure in this murder attempt, he earned strong disapproval from the workers’ groups and anarchists. He published anarchist journals titled “Mother Earth” and “The Blast” to encourage anarchism. Due to his anarchist activities as part of his ‘No Conscription League’ in New York, he was imprisoned for two years. Later the government deported him to Russia. During his stay in Russia, he observed the state of repression, mismanagement and corruption. He penned his experience in Russia in the form of “The Bolshevik Myth”. He created many pamphlets on Russian Revolution. Some of them are “The Russian Tragedy”, “The Russian Revolution and the Communist Party” and “The Kronstadt Rebellion”. His “Now and After: The ABC of Communist Anarchism” is an introduction that he wrote on the principles of anarchism. He wrote this piece to present the principles of anarchism in plain language. French Celebrities
Russian Celebrities
Non-Fiction Writers
French Men
Russian Men
Male Writers
Childhood & Early Life
Born as Ovsei Osipovich Berkman in the city of Vilnius which was a part of the Russian Empire at that time, he was the youngest of the four children of his Jewish parents.
He received classical education at the Gymnasium. During his youth, the growing radicalism which became popular among workers in the Russian capital influenced him much.
He lost his father when he was 15 years of age. In the next year, his mother passed away. In the month of February, 1888, he left for the United States. After reaching New York City, he got involved in anarchist activities. 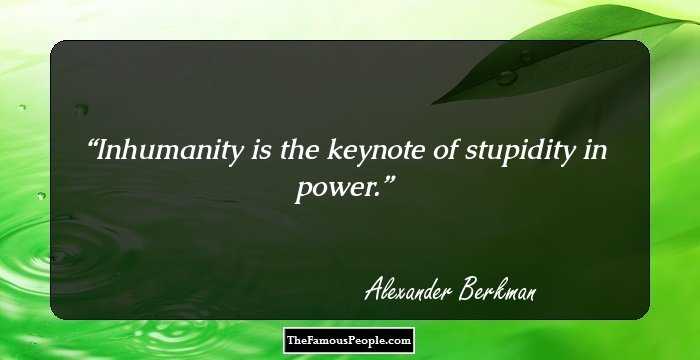 Famous Beautiful Women With Green Eyes
Career
He joined Jewish anarchist group, Pioneers of Liberty that used to campaign for the freedom of the convicted persons of the 1886 Haymarket bombing. At that time, he became acquainted with Johann Most, a famous anarchist in the US.
He worked as a typesetter for Most’s newspaper ‘Feiheit”. Later, when his relationship with Most broke, he became associated with another publication titled “Die Autonomie”.
He began his political action as an anarchist through involvement in the Homestead Strike. He planned to assassinate Frick Berkman, the manager of a steel plant, for his role in breaking the picket lines of its workers’ union. He bought a handgun and a decent suit from Pittsburg and shot Frick three times on 23rd July, 1892. As a result of this, he was convicted of attempted murder and given a 22 year prison sentence.
After serving 14 years of his sentence in prison, he was released in 1906. Later, he went to New York after hearing about the arrest of several anarchists at a meeting concerning Leon Czolgosz, the assassin of the U.S. President William McKinley.
From 1910 to 1911, he remained busy in establishing the Ferrer Center in New York. He also worked as its teacher. This center was named after Spanish anarchist Francisco Ferrerr and it aimed to encourage independent thinking among its students. It also worked as a community center for adults.
In 1913, when the United Mine Workers called a strike against coal-mining companies in Ludlow, Colorado, he arranged demonstrations in New York to support the miners. As a consequence of this protest, police arrested several anarchists. Under the leadership of Berkman, the anarchists planned a bomb attack on police. The bomb, however, exploded prematurely killing several anarchists.
In 1915, he went to California and the next year, he started the publication of his own anarchist journal “The Blast”. The journal appeared only for 18 months and became well known as an influential anarchist journal in the U.S.
In 1916, police suspected him for his alleged link to a bomb explosion during the San Francisco Preparedness Day Parade. Later, when police arrested two local labor activists, he helped them by raising a defense fund and hiring lawyers for them.
In 1917, when the U.S. participated in World War I, it became mandatory for men aged between 21 and 30 to register for military conscription. At that time, he organized No Conscription League in New York to express his protest.
In the month of June 1917, police arrested him and charged him under Espionage Act of 1917. He received two years’ imprisonment and served his sentence in the Atlanta Federal Penitentiary.
The government deported him to Russia under the 1918 Anarchist Exclusion Act. He left Russia in 1921, and shifted to Berlin for a few years. After reaching there, he wrote a number of pamphlets about the Russian Revolution. 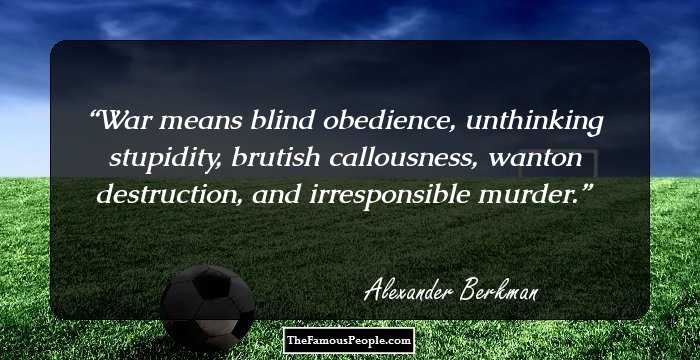 Major Works
His book “Prison Memoirs of an Anarchist” was published in 1912. This book bears a vivid account of his experience in prison in Pittsburg from 1892 to 1906. This book later became a classic in autobiographical literature.
Personal Life & Legacy
During his stay in New York, he had a romantic affair with Emma Goldman, a Russian immigrant. Later, he had an affair with Becky Edelsohn, a fifteen-year-old anarchist.
He suffered from a prostate condition that did not improve even after two operations. He shot himself with a handgun due to his inability to endure the physical pain of his ailment. 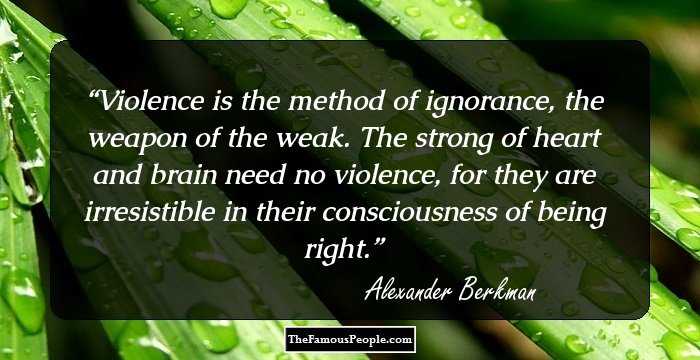 Quotes: Heart, Need
Trivia
This powerful anarchist decided to commit suicide by shooting himself with a handgun as he was unable to bear physical pain for his ailment. Unfortunately, the bullet lodged in his spinal columns and he became paralyzed. After remaining in a condition of coma, he passed away.
Recommended Lists:
Activists #610
You May Like

Quotes By Alexander Berkman | Quote Of The Day | Top 100 Quotes

See the events in life of Alexander Berkman in Chronological Order