Samuel Johnson was a prolific English writer, poet, essayist, critic, biographer and lexicographer. After attending a year in Pembroke College Oxford, he dropped out owing to financial constraints. However, he still went on to make an impact as a teacher and writer in his early career. He wrote several articles and biographies in ‘The Gentleman’s Magazine’, and later wrote poems and the famous play ‘Irene’, but one of his most notable works came after an endeavour of nine years, when his book ‘A Dictionary of the English Language’ was published, the first of its kind to precede ‘The Oxford Dictionary’ which was published nearly 150 years later. Towards the latter end of his career, he became more of a literary critic and an essayist. Since childhood he suffered from the ‘Tourette Syndrome’ that caused frequent involuntary tics and odd physical gestures, yet his talent and wit transcended such physical barriers. He is also proclaimed as the greatest literary critic of all time. British People
Essayists
Biographers
Non-Fiction Writers
British Men
Childhood & Early life
Samuel Johnson was born on 18th September 1709 at Lichfield, Staffordshire in England. He was born at home with the aid of a man-midwife and a reputed surgeon. Though he wasn’t a healthy baby, he gradually picked up health.
Samuel’s parents, Sarah and Michael had a stable financial status, yet the couple weren’t well off.
Misfortune struck their family when Samuel acquired scrofula commonly termed as the ‘King’s Evil’ when he was a young boy. A surgery had to be performed which left irrevocable scars on his face and body in 1712. In a couple of years, his parents had another child and they named him Nathaniel.
His mother was his first teacher; she would make him memorise verses from the ‘Book of Common Prayer’ at the age of three. At seven, he attended ‘Lichfield Grammar School’.
It was during this time that he gradually began suffering with tics. However, he was so intelligent that his parents took great pride in boasting about his achievements.
At sixteen he enrolled in the ‘King Edward VI grammar school’ and began writing poetry. He lived with his cousins since his school was near Pedmore, Worcestershire.
Upon returning home, he was faced with trying times. His father was in huge debt, thus Johnson had to assist his father by stitching books at his bookstore. However, by the grace of his aunt, Elizabeth Harriotts he was able to attend college since she left him money for his education after her death.
In 1728, he enrolled in ‘Pembroke College, Oxford. However, his funds were insufficient and after attending for thirteen months he left. 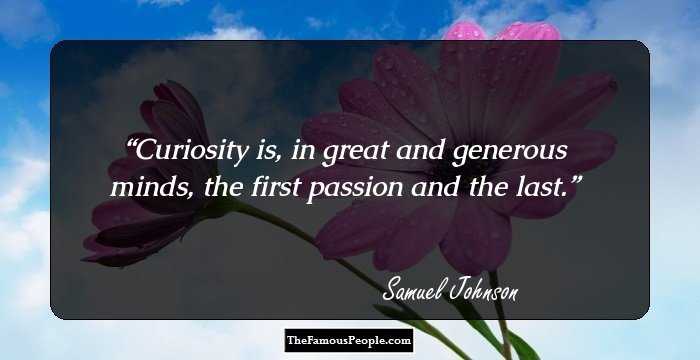 Who Is The Greatest Female Warrior In History?
A Teacher & Writer
With time his Tourette syndrome got worse. Around the same time his father developed an inflammatory fever that claimed his life in 1731. Soon after, Samuel Johnson became an undermaster at the ‘Market Bosworth’ School.
He found happiness in teaching even though it was mundane at times. After leaving his job as a teacher at ‘Market Bosworth’ he wrote ‘A Voyage to Abyssinia’. In 1735, he began working at a local school in Staffordshire.
In 1735 he opened his own school ‘Edial Hall School’, which was a private academy. However, he could gather only three students and had to shut it down.
In order to get his career rolling, he began writing his most appreciated work, the tragedy ‘Irene’. In 1737, he moved to London and in October began writing for ‘The Gentleman’s Magazine’.
The following year, he published his first poem ‘London’ anonymously. For several years Samuel endured hardships along with his friend Richard Savage. On Richard’s death in 1744, he wrote a moving biography of him named ‘Life of Mr. Richard Savage’, which became widely popular. 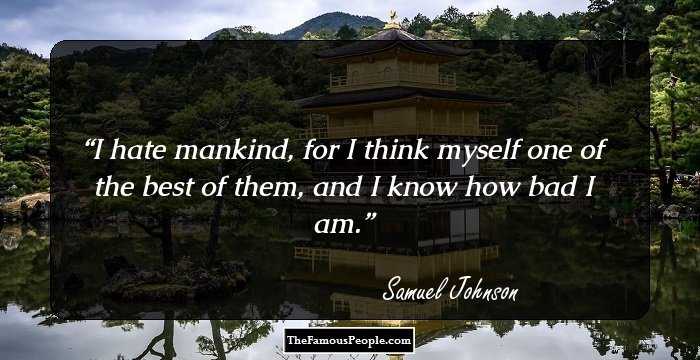 Quotes: Think, I
An Established Author
He was approached by publishers in 1746 to create a dictionary of the English Language, which would pay him 1,500 guineas. He claimed that he would finish it within three years. However, the data was so large that it took him almost eight years to compile the contents.
His dictionary became one of the most widely used references before ‘The Oxford Dictionary’, and thus earned him much credit and was published in 1755.
Along with the dictionary he worked on several essays, poems and sermons. And what followed was sheer brilliance in the form of a collection of essays titled ‘The Rambler’. He also wrote the famous poem ‘The Vanity of human Wishes’.
Continue Reading Below
In 1756 he began working on ‘The Literary Magazine’ and wrote prefaces for authors such as Charlotte Lennox and William Payne. The same year, he also began working on ‘Proposals for Printing, by Subscription, the Dramatick Works of William Shakespeare’ which occupied him for many years.
Three years later, he initiated work on a philosophical short novel called ‘Rasselas’. The book was later translated to five languages –Dutch, French, Russian, German and Italian.
By 1765, he readied his edition of ‘Shakespeare’ and titled it ‘The Plays of William Shakespeare, in Eight Volumes’. Towards the latter years of his career he became a political activist through his writings. He wrote several pamphlets such as ‘The False Alarm’ and ‘Taxation No Tyranny’.
In 1777, he began working on ‘Lives of the English Poets’ which was a biographical and critical analysis of the lives of major poets.
Major Works
'A Dictionary of the English Language' was Samuel’s Johnsons most revered work. The dictionary contained 42,773 entries and was by far the most accurate in terms of the language and literature used in the 18th century. Many of the words and quotations of the dictionary are found today in the ‘New English Dictionary’ and ‘Webster’s Dictionary’. 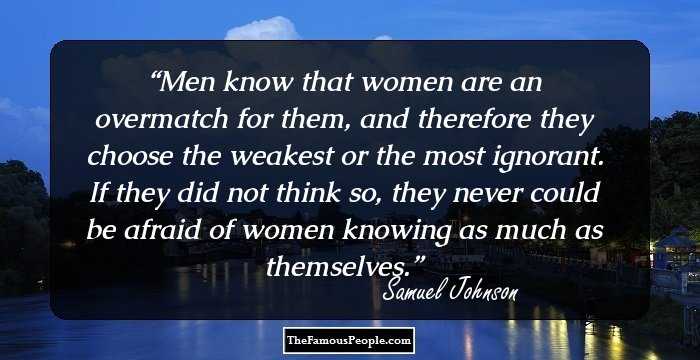 Quotes: Think, Never, Women
Awards & Achievements
He received a ‘Master of Arts’ degree from ‘Oxford University’ for his contribution towards English Language. He was also awarded an honorary doctorate by the ‘Trinity College Dublin’ in 1765.
In 1767, he met with King George III at the library of the Queen’s house. Later in 1775 he received another doctorate degree from ‘Oxford University’.
Personal Life & Legacy
After the death of his close friend Harry Porter, he met Porter’s wife Elizabeth, named Tetty by her relatives. At that time, Tetty was 45 years old and had three children. On 9th July, 1735 Johnson married Tetty, but her family couldn’t accept the marriage owing to the wide age gap, as Johnson was only 25 years.
In 1752, after a long terminal illness, Tetty passed away. Samuel grieved her death and felt guilty for having used her savings for his literary work.
In 1783, Johnson suffered a stroke and later had a gout surgery which improved his condition. He travelled to London in 1784 and on 13th December he died in coma. He was buried at the Westminster Abbey.
His collections of manuscripts, books and paintings are presently preserved at the ‘Houghton Library’ at the ‘Harvard University’. Amongst his many possessions a teapot owned by him is also on display.
Recommended Lists:
Biographers #2
Writers #144
You May Like

Quotes By Samuel Johnson | Quote Of The Day | Top 100 Quotes

See the events in life of Samuel Johnson in Chronological Order