Born in a military family, Keyes spent his childhood in Army bases. While his brothers enlisted in the military, he pursued his political ambitions. Studying political philosophy and Government affairs, he started out in Government service as the apprentice of Jeane Kirkpatrick, in the Department of State. The department which handled international affairs sent Keyes on various diplomatic assignments to India and Zimbabwe. During the Reagan administration he assisted the President in handling international affairs, and was also a member of the President’s advisory council on National Security. He was also the US ambassador to the ‘ECOSOC’. A staunch believer of anti-abortion ethics, this activist echoed the sentiments at the ‘World Population Conference’ in Mexico City. He is well known for having expressed his displeasure against the LGBT community public. He considers homosexuality as sinful, even though his daughter Maya is a self-professed Lesbian. After an abrupt resignation from Government services, he joined the ‘Republican Party, and participated in the Senate elections of 1988 and 1992. The highlights of his political career were his participation in the Presidential elections of 1996, 2000 and 2008. In 2008, he formed the ‘America’s Independent Party’ after separating from the Republican Party and losing out on a Constitution Party nomination. He strongly opposes Barack Obama, and he even filled a law suit charging the US President of manipulating his birth records. To know more about the life and personality of Alan Keyes read the following biography American People
Black Leaders
Black Diplomats
Political Leaders
Black Miscellaneous
Childhood & Early Life
Keyes was the fifth child born to his parents, Gerthina Keyes, a U.S army sergeant, and Allison, on August 7th, 1950. He went on to become a US diplomat and politician. Though Keyes was born in Long Island, New York, he grew up in the army bases around US and even overseas in Italy.
He went to ‘Cornell University’ to pursue his under-graduate studies in political philosophy. Keyes primed under the guidance of American sophist and academician Allan Bloom in the university. His father and brothers were commissioned in Vietnam during the war, and when the campus was ravaged by anti-Vietnam war supporters, Keyes faced dangers as he refused to be a part of the demonstrations.
Following the life-threats, Keyes abandoned the campus and enrolled in an overseas residential program of the ‘Cornell University’ in Paris, and completed his schooling under the mentorship of Allan Bloom.
For his graduate program in government affairs, Alan attended the ‘Harvard University’ where he made acquaintance with William Kristol, who would later manage Alan’s U.S. Senate campaign. This activist earned his ‘Bachelor of Arts’ degree in 1972.
As a part of his doctoral dissertation, Alan studied under Professor Harvey C. Mansfield, and he presented his discourse on constitutional theory and an eminent constitutionalist named Alexander Hamilton. He also underwent an apprenticeship in the United States Department of State under Jeane Kirkpatrick. The ‘Harvard University’ granted him a PhD in government affairs in 1979. 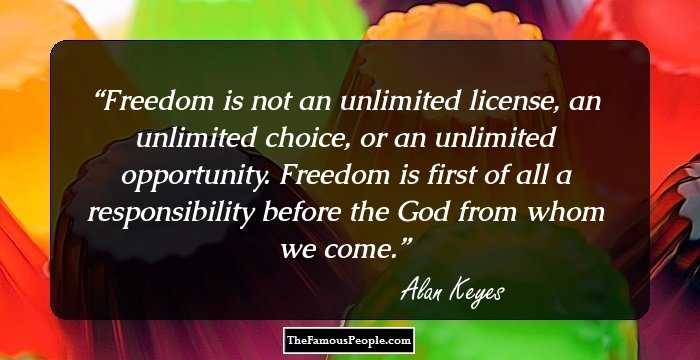 Quotes: God
Continue Reading Below
Career
Continuing to work in the Department of State, after completion of his doctorate in 1979, this diplomat was part of the convoy posted to the Mumbai consulate, located in India, and the following year he was commissioned at the US embassy in Zimbabwe.
Keyes’ was then appointed to be a part of a number of diplomatic missions during the Reagan administration. In 1983, he was appointed the Ambassador for US in the ‘ECOSOC’.
In 1984, he was a part of the US convoy which was sent to Mexico City for the ‘World Population Conference’. As the Deputy Chairman, he debated the Mexico City Policy on curbing any form of grant made available to NGOs which promote abortion.
From 1985 to 1987, he held the post of ‘Assistant Secretary of State for International Organizations’. His tenure at the UN was rife with controversy.
He was accepted by the ‘American Enterprise Institute’ for his post-doctoral research in 1987. As a part of the scholar-in-residence program, he conducted research on foreign affairs and self-government.
After successfully representing the United States in numerous diplomatic missions, Keyes contested the 1988 senate elections, as a candidate of the ‘Maryland Republican Party’. Pitted against the Democratic Party candidate, Paul Sarbanes, he was defeated by a huge margin.
From 1989 to 1991, he served as the President of the government advocacy group ‘Citizens Against Government Waste’.
In the 1992 Senate election, Keyes fared well in the preliminaries, but was defeated again in the general elections by the ‘Democratic Party’ candidate Barbara Mikulski.
Keyes decided to contest in the preliminaries Presidential elections of 1996 for gaining a Republican Party candidature. He steered his campaign with abortion as the agenda. Disfavoured by his own party inmates for blatant criticism of other contestants, he failed to receive the party nomination.
Continue Reading Below
In the preliminaries prior to the 2000 Presidential election, Keyes again made an unsuccessful attempt at gaining the Republican Party nomination. Basing his campaign on the pillars of family ideals and tax reforms, this turned out to be his most successful run, where he finished second in the eight primaries.
Entering late into the rat race, Keyes contested against ‘Democratic Party’ candidate Barrack Obama in the 2004 Senate elections. Reprimanded by the media for being an opportunist, as he was contesting from Illinois as a last moment replacement for fellow Republican Jack Ryan, and his condemnation of the LGBT community, Keyes ended up losing this election.
After the dismal performance in the 2008 presidential elections, Keyes departed from the ‘Republican Party’ in April, with hopes to clinch a candidacy with the Constitution Party.
Following his failure to acquire a Constitution Party nomination, which he lost to Chuck Baldwin, Constitution Party’s former vice-presidential candidate, Keyes along with his supporters formed ‘America’s Independent Party’. The leader contested in the 2008 federal election, with an ‘AIP’ nomination and fared seventh with a total vote tally of 47,694, majority of which were voters from the California region, where the party gained its affiliation.
In November 2008, Keyes announced that he refused to accept Barack Obama as the next American president. He also alleged that the details on the President’s birth certificate were forged and Obama was not a natural born citizen of the US. The politician also said that Obama was not eligible to become the President. 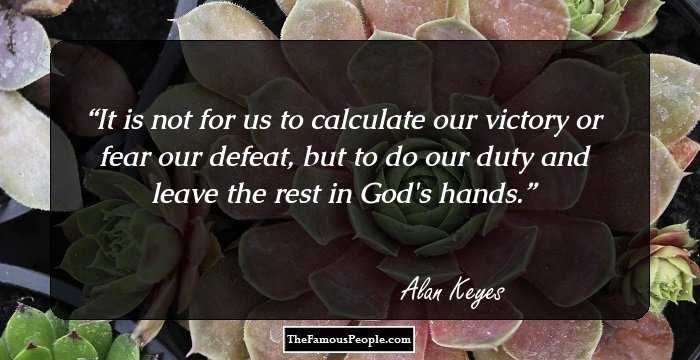 Quotes: Fear
Major Works
While working under the Reagan Administration, Alan’s political career took a head start. He was appointed as a diplomat to the ‘ECOSOC’, United Nations, where he advocated the Mexico City Policy. Though his tenure was conspiracy laden, it became the crux of his political ambitions.
Personal Life & Legacy
During his stay in India, when he was posted to the Mumbai consulate, Alan met Jocelyn Marcel, who was of Indian origin, hailing from the city of Calcutta. They took the nuptial vows and have three children named Francis, Maya and Andrew. 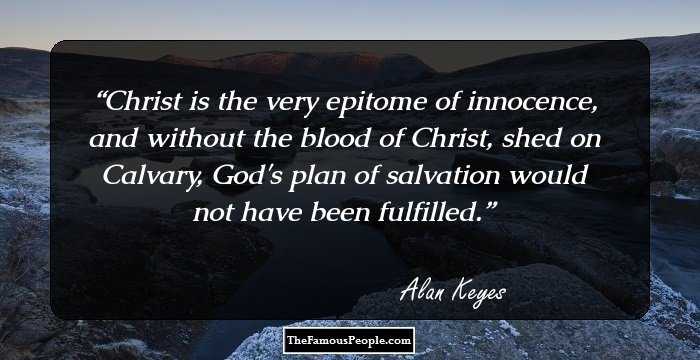 Trivia
The politician was nicknamed ‘Ambassador Keyes’ and he started the CAGW’s ‘National Taxpayers’ Action Day’ when he was the President of the organization
Recommended Lists:
Leaders #2422

See the events in life of Alan Keyes in Chronological Order