Aeschylus was a Greek tragedian who gave his life to dramatic arts. He laid the foundation and groundwork that was required for the art to flourish in the world. While he served as the initiator, Sophocles and Euripides took over as his notable successors. Till date, the works of the trio, Aeschylus, Sophocles and Euripides survive and can be read or performed. Aeschylus often referred to as the father of tragedy, was truly the founder of Greek tragedy. It is through his works that the basic understanding of the earlier tragedies was developed. His plays have been serving as the point of reference till date. At the time when Aeschylus began writing, theatre was just about evolving. Plays performed then were just about choral poetry supplemented with expressive dance. Aeschylus not just worked on the genre but brought about new theme by introducing a second actor in the play in the form of chorus. In his lifetime, he is said to have written about ninety plays of which only seven survive till date. Nevertheless, these seven plays help in the basic understanding of earlier tragedies. Greek People
Greek Men
Male Writers
Greek Writers
Greek Playwrights
Childhood & Early Life
Not much is known about the life of Aeschylus or the exact date as to when was he born. However, it is believed that he was born in 525 BC in Eleusis, a small town which is located northwest of Athens.
Born in a wealthy and affluent family, he was fathered by Euphorion, a member of the Eupatridae, the ancient nobility of Attica. 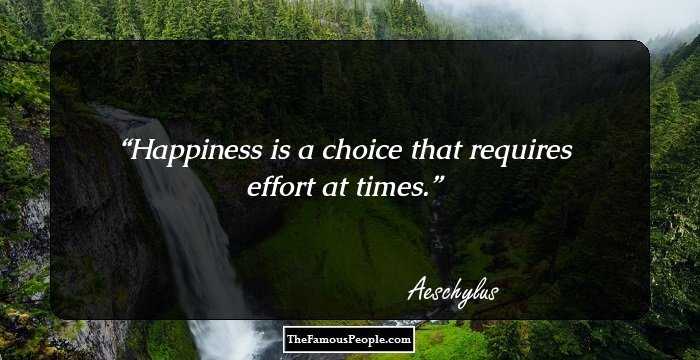 The Sexiest Men Of 2020, Ranked
Later Life
During his early years, young Aeschylus worked at the vineyard. According to 2nd-century AD geographer Pausanias, God Dionysus visited Aeschylus in his sleep and instructed him to concentrate his energy and focus his attention on the nascent art of tragedy. Stirred by the dream, he woke up suddenly and started writing a tragedy.
Meanwhile in 510 BC, Cleisthenes assumed power after Cleomenes I expelled the sons of Peisistratus from Athens. He brought in new reforms according to which a system of registration was applied that emphasized the importance of the deme over family tradition.
The Persian war greatly influenced his life and career. In 490 BC, he along with his brother Cynegeirus fought to defend Athens against Darius I at the Battle of Marathon.
The battle turned in favour of the Athenians. Though there was joy all around, the death of his brother Cynegeirus while trying to prevent a Persian ship retreating from the shore caused much pain and grief to him.
He resumed his military duties in 480 BC when he received a call to fight against Xerxes I's invading forces at the Battle of Salamis. He rendered his services to the Battle of Plataea as well in 479 BC.
Military service apart, he was a playwright and the first to introduce the genre of tragedy. He took part in the dramatic competitions that were common in those days. The competition was a grand affair and was more of a festival.
The first ever competition that he participated in comprised of three playwright including him, each of whom presented a tragic play which was followed by a shorter comedic satyr play.
The first competition was followed by a second competition wherein there were five comedic playwrights. The winner of both the competition was adjudged by a panel of judges. During his lifetime, he participated in many such competitions.
Over his lifetime, he wrote about ninety plays of which only seven survive till date. They include, ‘The Persians’, ‘Seven against Thebes’, ‘The Suppliants’, the trilogy ‘The Oresteia’, consisting of the three tragedies Agamemnon, The Libation Bearers and The Eumenides and ‘Prometheus Bound’.
Continue Reading Below
Except for ‘Prometheus Bound’ whose authorship is yet again disputable and a matter of contention, all his plays are believed to have bagged the first prize in the competition.
By 473 BC was after the death of Phrynichus, another Greek tragedian, Aeschylus became yearly favourite in the Dionysia and went on to win every competition.
‘The Persians’ is his oldest surviving play, which was performed in 472 BC and won first prize at the Dionysia. It was loosely based on his own life and experience at the Battle of Salamis.
His next surviving play, ‘Seven Against Thebes’ was performed in 467 BC. It was themed around the interference of Gods in human affairs. The play originally depicted the story of the two sons of the King of Thebes, Oedipus and their death due to greed for throne. It ended with mourning for the dead brothers
In 458 BC, he brought forth his trilogy play The Oresteia, which has today become the only surviving trilogy of Greek plays by any playwright. The play includes three plays, Agamemnon, The Libation Bearers (Choephoroi), and The Eumenides which together portray the bloody story of the family of Agamemnon, King of Argos.
There are doubts whether last of his surviving tragedies ‘Prometheus Bound’ was penned by him. While ancient authorities claim it to be his offering, scholars have raised doubts over it. 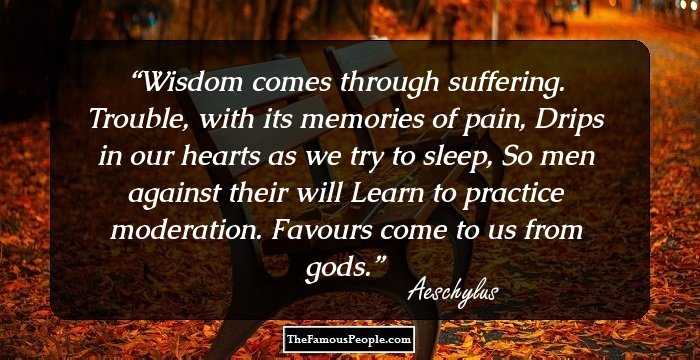 Personal Life & Legacy
He married and was blessed with two sons, Euphorion and Euaeon. Interestingly, both his sons became tragic poets. Euphorion outdid Sophocles and Euripidesin and won the first prize in a competition.
Aeschylus’ nephew, was also a tragic poet, and won first prize in the competition against Sophocles' Oedipus Rex.
His last visit to Sicily was in 458 BC. During this visit, he explored the city of Gela. It was during this time that he breathed his last. If the legends are to be believed, he met his death when an eagle mistook his bald head for a rock and dropped a tortoise on it. He breathed his last in 456 BC
Post his death, a monument was erected in his memory.
Trivia
This Greek tragedian and playwright is popularly remembered as the ‘Father of Tragedy’. 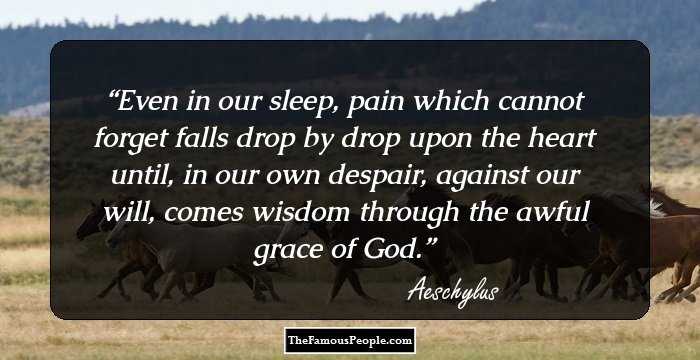 Quotes By Aeschylus | Quote Of The Day | Top 100 Quotes

See the events in life of Aeschylus in Chronological Order 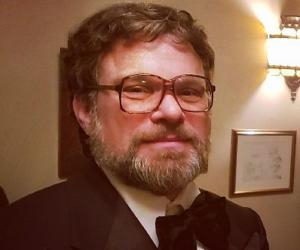 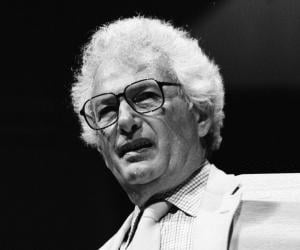