Literature without Shakespeare is like an aquarium without fishes. Though it would have all the adoration and kinds, a look at it would tell you that it is lifeless and dead. The world’s greatest playwright and writer of English language, William Shakespeare has been conferred with the honour of being England’s national poet and ‘Bard of Avon’. An author of 38 plays and 154 sonnets, his work was much more appreciated by the world after his lifetime. Plays written by Shakespeare have been translated into every major language of the world and have been performed extensively than those of any other playwright. Interestingly, such a power profile of a prolific writer went under the knife many a times after his death. Since there is no substantial information regarding the birth, life and death of Shakespeare, his education and his ‘supposed’ literary connection, critics raised a controversy number of times as to whether or not he is the ‘real’ author behind the works, most of them believing that the work was written by someone else. Across his career, this literary genius has touched various genres of playwriting including comedy, romance, tragedy and history. A respected poet and playwright, it was only in the 19th century that Shakespeare’s reputation rose astronomically. While the Romantic considered him genius, the Victorians revered him. Even in the present 21st century, Shakespeare’s works are being studied and performed in various cultures. Without a doubt, he is the most prodigious and cherished contributor to the world of literature! Mark Rylance
DID WE MISS SOMEONE?
CLICK HERE AND TELL US
WE'LL MAKE SURE
THEY'RE HERE A.S.A.P
Quick Facts

British People
Playwrights
British Men
Male Poets
Taurus Poets
Childhood & Early Life
William Shakespeare was born to John Shakespeare and Mary Arden. Though his actual date of birth is not known, it is traditionally observed on April 23, 1564. As per church records, he was baptized on April 26, 1564. He was the third child and the eldest son of the couple who had eight offspring.
Little is known of Shakespeare’s childhood and education. It is speculated that he attended the King’s New School in Stratford, where he learned to read and write. Since all the grammar schools then followed the same curricula, it is believed that he received intensive education in grammar based upon Latin classical authors. 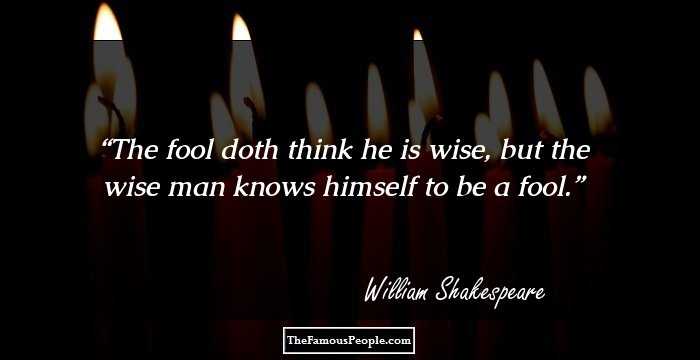 Quotes: Think
Continue Reading Below
Theatrical Beginnings
Before records which state the commencement of Shakespeare’s theatrical career, there is a period of seven years from 1585 until 1592, of which little or no information is known. While some speculate his involvement at the poaching game, others estimate his taking up the job of an assistant schoolmaster.
Though it’s not exactly known as to when did Shakespeare begin his writing career, records of performances show that his plays started to feature on the London stage by 1592.
A famous man by then, Shakespeare attracted the attention of both critics and fans alike. Robert Greene is one of the earliest critics of Shakespeare who was irked by Shakespeare’s attempt to match university-educated writers
Since 1594, almost all of Shakespeare plays were performed by the Lord Chamberlain's Men. The group, in no time, reached to the topmost position and became a leading playing company in London so much so that they bought their own theatre in 1599 and named it Globe.
Meanwhile, Shakespeare’s reputation as a playwright and actor grew by leaps and bounds to the extent that his name itself had become a strong selling point. The success of the company strengthened the financial stability of Shakespeare as well.
Post the death of Queen Elizabeth in 1603, James I awarded the company with a royal patent and changed its name to King’s Men. The group became immensely popular thereafter with several of Shakespeare plays published and sold as popular literature.
Shakespeare acted in numerous plays written by him and others, some of which include ‘Every Man in His Humour’, ‘Sejanus His Fall’, ‘The First Folio’, ‘As You Like It’, ‘Hamlet’ and ‘Henry VI’.
Shakespeare career graph showed a prosperous growth towards the end of the 16th and beginning of the 17th century. Out of 37 plays written by him, 15 had been published. He acquired much wealth from the successful outing which led to his buying a huge mansion at Stratford called New House.
Shakespeare started to buy real estate in lease thus turning into an entrepreneur as well. It was these investments and their assured financial profits that gave Shakespeare more time to concentrate on writing his plays.
Continue Reading Below 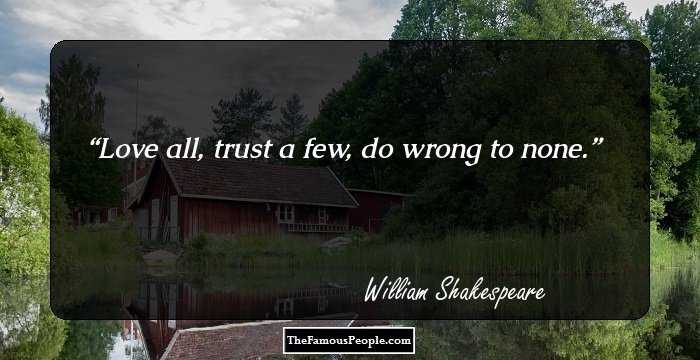 Quotes: Love
Stint At Poetry
The closure of the theatres during 1593 and 1594 due to plague led Shakespeare to try his hand at writing poetry. He came up with two poems during this time, ‘Venus and Adonis’ and ‘The Rape of Lucrece’, both of which were dedicated to Henry Wriothesley, Earl of Southampton.
While ‘Venus and Adonis’ depicted the sexual advancement of Venus and eventual rejection of Adnois, ‘The Rape of Lucrece’, as the name suggests, presented the emotional turmoil of Lucrece who is raped by Tarquin. Both the poems gained extreme popularity and were often reprinted
Shakespeare then penned ‘A Lover's Complaint’ and ‘The Phoenix and the Turtle’. While the former gives a brief tale of a woman who is in anguish due to the attempts of seduction by her suitor, the latter mourns the death of phoenix and his lover.
In 1609, Shakespeare came up with his work titled, ‘Sonnets’. It was his last work in the field of poetry that was printed. In it, there are about 154 sonnets. Though the time of writing these sonnets is questionable, it is believed that Shakespeare wrote them all through his career but for private readership.
The sonnets have a style of their own which is distinctive and atypical and celebrate the emotion of love, passion and sex. It also delves deeply and gives information about procreation, death, and time.
His Works & Style
Talking about the style that Shakespeare adopted for his work, he was extremely innovative. He adapted the traditional and convention style in his own way by adding metaphors and rhetorical phrases. However, the additions hardly ever aligned to the plot or the characters of the story.
Most of his plays have the presence of a metrical pattern consisting of lines of unrhymed iambic pentameter, or blank verse. Furthermore, there are passages in all the plays that deviate from this and use forms of poetry or simple prose.
In the initial years of his writing, i.e. during the 1590s, Shakespeare mostly took the theme of his work from history, ‘Richard II’, ‘Henry V’, ‘Henry VI’ and so on. The only work which was an exception during this phase was ‘Romeo and Juliet’.
Continue Reading Below
Versatility crept in later as Shakespeare tried to touch various genres with his extensive work. While ‘A Midsummer Night’s Dream’ was his take on witty romance, ‘Merchant of Venice’ depicted the romance quotient.
‘Much Ado About Nothing’ showed the importance of wit and wordplay while ‘As You Like It’ and ‘Twelfth Night’ were an out-and-out comedy. Some of the other works of this time include, ‘Titus Andronicus’, ‘The Comedy of Errors’, ‘The Taming of the Shrew’ and ‘The Two Gentlemen of Verona’.
In his later years, Shakespeare touched the genre of tragedy. In his character-representation, Shakespeare presented an intense account of human behaviour and actions. Several of human emotions like betrayal, retribution, incest and moral failure were classically defined in the works including ‘Hamlet’, ‘King Lear’, ‘Othello’ and ‘Macbeth’. Most of these works had tragic endings and thus came under the genre of dark tragedies.
It was in the last league of his works that Shakespeare mixed tragedy and comedy to come up with tragicomedies that though had a sad story to tell, but by the expiration of the play, had a happy ending. ‘Cymbeline’, ‘The Winter's Tale’ and ‘The Tempest’ are classic examples of such plays written by Shakespeare
Post 1610, the number of plays written by Shakespeare reduced astronomically to the point that after 1613, there are no plays attributed to him. It is speculated that his last three written plays were in collaboration with John Fletcher, who succeeded as the playwright after Shakespeare for the theatre group, King’s Men. 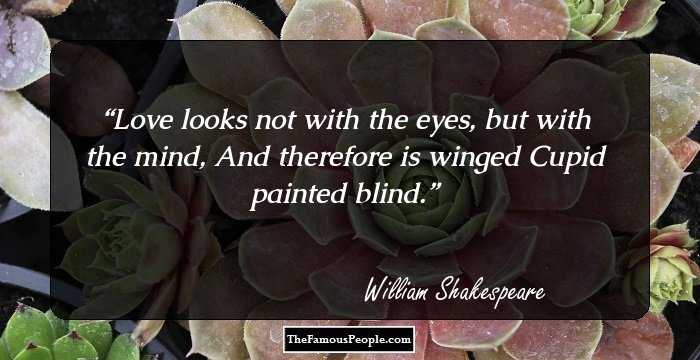 Quotes: Love
Personal Life & Legacy
As was the tradition of the early decades, Shakespeare tied the knot early in life to Anne Hathaway. He was 18 while she was 26 at the time of marriage.
The couple was blessed with three children, a daughter born six months after marriage named Susanna and twins born two years later, a son Hamnet and daughter Judith.
Shakespeare is said to have breathed his last on the date of his birth (which again is under speculation), on April 23, 1616. As per the Church records, he was interred on April 5, 1616 in the chancel of the Holy Trinity Church. He was survived by his wife and two daughters.
The stone slab covering his grave reads the epitaph, ‘Good friend, for Jesus' sake forbear, To dig the dust enclosed here. Blessed be the man that spares these stones, And cursed be he that moves my bones.’
Posthumously, a funerary monument was erected to honor him and his work on the North Wall. It had a half-effigy of him in the act of writing. Additionally, there are funeral monuments in Southwark Cathedral and Poets' Corner in Westminster Abbey dedicated to him.
Furthermore, numerous statues and monuments that have been erected around the world in the memory of Shakespeare stand as a testimonial for the glorified work of this prolific poet and playwright.
Trivia
Shakespeare's sexuality is highly debated. It is speculated that he was bisexual.
He is often referred to as England’s national poet and ‘Bard of Avon’.

Quotes By William Shakespeare | Quote Of The Day | Top 100 Quotes

See the events in life of William Shakespeare in Chronological Order