Abdoulaye Wade is a Senegalese politician, lawyer, and professor, who served as the President of Senegal from 2000 to 2012. He became the president after several years of bidding for the office before finally getting elected to the post. He easily won the re-election for a second term but had to step down after being defeated in his attempt for a third term. Brilliant from a young age, he won a scholarship to study in France. Upon his return to Senegal he embarked on a career as a professor of law and also became actively involved in politics. He founded the Senegalese Democratic Party (Parti Démocratique Sénégalais; PDS) as an opposition to the ruling Socialist Party (Parti Socialiste; PS) in 1974. Starting from 1978, he made four unsuccessful bids for the presidency before finally winning the election in 2000. His first term as the president was a successful one and he was appreciated for the much-needed reforms he introduced in the nation. Even though he easily won the re-election, his second term was not as successful as the previous one and he lost his bid for a third term. However, even in his defeat he gained acclaim for his commitment to democracy as he stepped down peacefully unlike a few other African leaders who had resorted to violence in an attempt to hold on to power. Mamadou Dia
DID WE MISS SOMEONE?
CLICK HERE AND TELL US
WE'LL MAKE SURE
THEY'RE HERE A.S.A.P
Quick Facts

Senegalese People
Black Leaders
Black Presidents
Political Leaders
Black Political Leaders
Childhood & Early Life
According to official records, Abdoulaye Wade was born on 29 May 1926, in Kébémer, Senegal. However there is some discrepancy regarding his birth year and it is generally believed that he was born a few years earlier. Birth records in the 1920s Senegal were not much reliable. At that time the country was under French rule.
He attended secondary school in Senegal where he proved to be a brilliant student. He was awarded a scholarship to study in France.
He attended the lycée Condorcet in France where he studied law. After graduation he also taught law for some time.
He eventually earned his Ph.D. in law and economics from the Sorbonne (now part of the Universities of Paris I–XIII) in 1970. 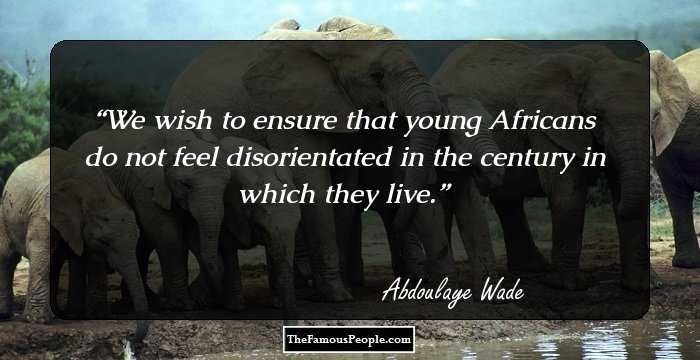 The Best Black Actresses Of All Time
Career
Abdoulaye Wade practiced law in France for a few years before returning to Senegal. On his return he was offered the post of a professor at the University of Dakar in Senegal. Later on he became the dean of law and economics.
By this time he had developed a keen interest in politics and in 1974, Wade attended a summit of the Organization of African Unity in Mogadishu where he told President Léopold Sédar Senghor that he wanted to start a new party.
Thus on 31 July 1974, Wade founded the Senegalese Democratic Party (Parti Démocratique Sénégalais; PDS) as an opposition party to Senghor’s Socialist Party (Parti Socialiste; PS). While PDS was initially intended as a Labour party, it adopted liberalism in 1976 in order to comply with some new legislation.
Founding of the PDS marked the beginning of a new opposition movement in Senegal. Abdoulaye Wade won a seat in the National Assembly in 1978. The same year he made his first bid for presidency, running against incumbent Senghor. Wade was unsuccessful in this attempt but this loss only fuelled his presidential ambition further.
Senghor stepped down from the presidency in 1981 and was succeeded by Abdou Diouf. In 1983, Wade made another bid for presidency, which was again unsuccessful. He would make two more unsuccessful attempts in 1988 and 1993.
Meanwhile, Wade maintained close contacts with Abdou Diouf and spent a year and a half as a Minister of State without portfolio in the early 1990s. However he resigned due to difference of opinions with PS.
Abdoulaye Wade rejoined the government as the Minister of State in 1995 but continued with the profile only until 1998. Though he was elected to the National Assembly in the February 1998 parliamentary election, he announced his resignation from the National Assembly in late July 1998, stating that there were enough deputies who could take up his position.
After spending a year in France, Wade returned to Senegal in October 1999. Despite so many failures, he stood for the presidential elections yet again in 2000. While he did not win the first round of the elections, the rival party too didn’t garner a majority. As such, a second round of election was held in which Wade emerged as a winner. Thus Abdoulaye Wade took up the chair of the President of Senegal on April 1, 2000.
During his term, he promoted a new constitution according to which the term of the president was reduced from seven to five years. The change was effective from 2007. In the 2007 presidential elections, Wade once again won and continued as the president for another term.
Continue Reading Below
However, unlike his first term, the second term of Wade wasn’t a very successful one, as there was lack of progress in dealing with infrastructure problems such as power shortage and rise in the cost of living. Also, the constitutional amendments that he proposed brought about a lot of criticism.
Wade’s commission of establishing an enormous statue at during Senegal’s 50th independence anniversary celebration in April 2010 drew a lot of criticism from people. Right from the statue’s semi-nude figures, to its huge cost of production to his claim of having for himself one-third of the revenue generated by the statue, everything was condemned.
In 2012, Abdoulaye Wade once again stood for presidency. This time however he was defeated by the opposition candidate Macky Sall by a huge margin. Admitting his defeat, Wade stepped down from his position on April 2, 2012. Unlike some other African leaders who used the army to maintain their grasp of power even after an electoral defeat, Wade peacefully retracted from his position. For this act of his, he has been considered among the rare African leaders who are committed to democracy. 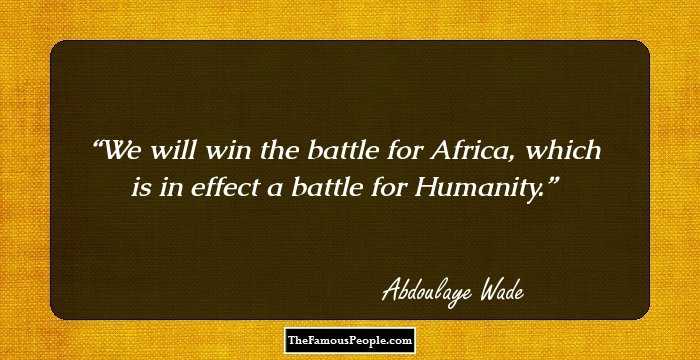 Major Works
Abdoulaye Wade’s first term as the president is considered to be a successful one. As promised in his election campaigns, he introduced a much-needed modernization program to improve the quality of the Senegalese citizens. Schools were built all over the nation, better drinking water facilities were provided, and improved access to medical facilities was made available to the citizens.
Wade also worked hard to bring down Senegal’s financial dependency on France and strived to build foreign relations with other countries such as China and Dubai by signing agreements with their governments. His vision and statesmanship earned him respect on an international level.
Awards & Achievements
In 1962, Abdoulaye Wade was made Commandeur de l'Ordre du Mérite by the Republic of Senegal.
He was made Grand Officier de la Légion d'Honneur by the Government of France in 1992.
He was honored with the W. Averell Harriman democracy award by the National Democratic Institute in 2005. 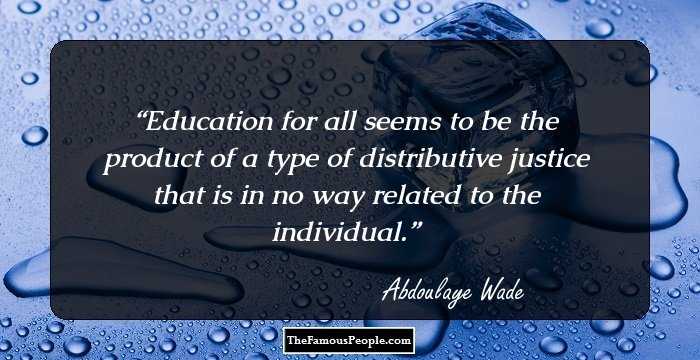 Personal Life & Legacy
While in France for his studies, Abdoulaye Wade met Vivian Vert and married her in 1963. The couple has two children: Karim Wade and Sindjely Wade.
Former head of the national agency of the Islamic Organization Conference, Karim Wade has served as the Minister of State for International Cooperation, Urban and Regional Planning, Air Transport, and Infrastructure since May 2009, while his daughter is a Special Assistant to the President who has participated in many Paris-Dakar rallies.
You May Like

Quotes By Abdoulaye Wade | Quote Of The Day | Top 100 Quotes

See the events in life of Abdoulaye Wade in Chronological Order 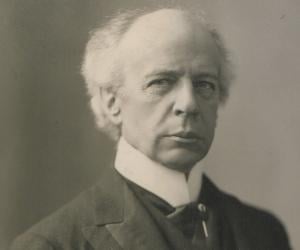