William Pitt the Younger was a British politician who became the youngest Prime Minister at the age of 24. He is best known for securing England through hard times. Born in Great Britain to the Earl of Chatham, Pitt was plagued from poor health since childhood. Despite his poor health, he was a bright child and completed his graduation from Cambridge University as a teenager. Subsequently, he was elected to the parliament at the age of 21 and later served as the Chancellor of the Exchequer. Following the battle between George III and the Charles Fox, when George III asked him to form a government, Pitt was elected the youngest man to become the British Prime Minister. His government worked to restore public finances which were severely strained after the American War of Independence, and also imposed new taxes for generating revenues. Pitt had long felt that union of England and Ireland was necessary and after French declared war on Britain, he brought in an Act of Union to merge both the countries. But he faced fierce royal opposition in his attempts to abolish restrictions on Catholicism in Ireland and was forced to resign in 1801. Three years later, with Napoleon threatening invasion, the king was forced to ask Pitt to form a government and thus he returned to Prime Minister’s office again in 1804. Later, the collapse of Third Coalition against France imposed a severe strain on Pitt's already weakened health which resulted in his death Cause of Death: Peptic Ulcer

British People
British Men
Male Leaders
Gemini Leaders
British Leaders
Childhood & Early Life
William Pitt the Younger was born on May 28, 1759, at Hayes Place in the village of Hayes, Kent, England, to William Pitt, 1st Earl of Chatham, and his wife, Hester Grenville.
He was the second son in the family and belonged to a political background from both his parents. His mother was sister to former British Prime Minister, George Grenville.
Initially, Pitts was educated at home by the Reverend Edward Wilson and being a bright child, he quickly became proficient in Latin and Greek.
In 1773, he went to Pembroke College, Cambridge, where he studied numerous subjects including mathematics, chemistry and history.
In 1776, Pitt took advantage of a little-used privilege which was offered only to the sons of noblemen and chose to graduate without having to pass examinations.
In 1778, his father died and being his younger son, Pitt the Younger received a small inheritance. He studied legal education at Lincoln's Inn and was called to the bar in the summer of 1780. 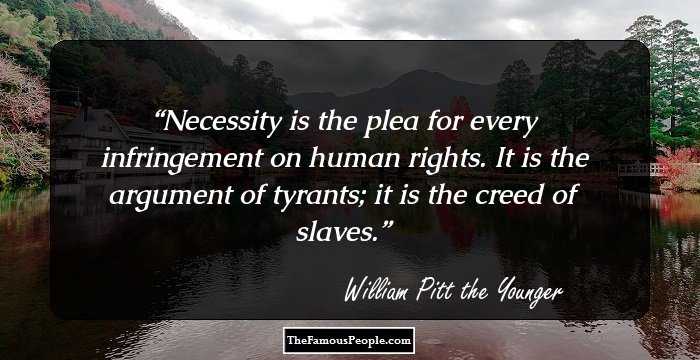 The Best Black Actresses Of All Time
Career
In 1780, William Pitt stood unsuccessfully for a parliamentary seat but the following year, he became a Member of Parliament from Appleby in Cumbria, at the age of 21. Although he was offered several minor office posts early in career, he chose to preserve his political independence and wait for more responsible positions.
In July 1782, he was appointed the Chancellor of the Exchequer in Lord Shelburne's ministry. The following year after Lord Shelburne resignation, Pitt was offered the post of Prime Minister but he wisely declined because he knew, he would not be able to secure the support of the House of Commons. A coalition government of Charles James Fox and Lord North, nominally headed by William Cavendish-Bentinck, 3rd Duke of Portland, took office on 2 April 1783. Pitt was stripped of his post as Chancellor of the Exchequer, and he joined the Opposition.The Fox-North coalition government fell in December 1783 over the impasse on Edmund Burke's bill to reform the East India Company. Fox introduced the bill but the King George III was opposed to it. The bill was passed in the House of Commons but the King intervened and made sure that it was defeated in the House of Lords. Following the bills failure in the Upper house, the King dismissed the Fox-North and made William Pitt the Prime Minister.
In December 1783, Pitt became the youngest Prime Minister of Britain at the age of 24, serving the head of the ministry as First Lord of the Treasury and Chancellor of the Exchequer. Despite some early public concern about the government, Pitt’s ministry survived for 17 years.
With the support of the King and the House of Lords, he won with a very large majority in the 1784 general elections. During that year, Pitt set about reducing the national debt and combating smuggling.
In 1786, he established the sinking fund to pay off the national debt, and also introduced other important financial and administrative reforms. In the field of colonial administration, Pitt brought about reforms in the governing of both India and Canada.
From 1784 to 1789, Pitt made his greatest achievements until the outbreak of the French Revolution which brought new problems.
In 1793, France declared war on England and the remainder of Pitt's career grew increasingly troublesome and was chiefly occupied with winning the war against France.
Pitt emphasized on the parliamentary union of Ireland with England and with the Act of Union 1800, he achieved the legislative union. Same year, however, Pitt’s attempt to abolish restrictions on Roman Catholics proved unsuccessful and met with the King's adamant refusal. In March 1801, he accordingly resigned from his post.
In 1804, Pitt was recalled to office and King George III asked him to form government for a second time and guide England in the struggle against Napoleon Bonaparte. Thus, Pitt returned to the Prime Minister’s office and took control.
He formed an alliance with Russia, Austria and Sweden against France but his long years of wartime service had weakened his health, and the news of the defeat of England's allies at the Battle of Austerlitz shattered Pitt completely. 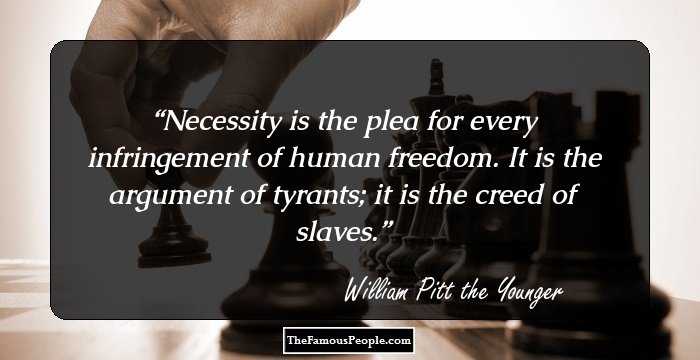 Major Works
One of Pitt's most significant accomplishments was the restoration of the country’s economy after the American War of Independence. He was successful in coping up with the mounting national debt, and also implemented modifications to the tax system in order to improve the revenue generation.
Personal Life & Legacy
From an early age, he suffered from several health problems such as gout and bad digestion. He remained a bachelor all his life and had no children.
Pitt died on account of his lifelong illnesses on January 23, 1806, at Bowling Green House on Putney Heath, London, England. His body was buried in Westminster Abbey.
You May Like