(7th President of the United States)

Advanced Search
Andrew Jackson was the seventh president of the United States and the first one to be elected from the ‘Democratic Party.’ He was a lawyer, planter, and army man, but is mostly remembered as one of the greatest presidents of the United States. After being tortured in captivity of the British army and orphaned as a teenager, he developed a fierce hatred towards the British, which would become the driving force for the rest of his life. He gained national fame because of his role in the ‘War of 1812,’ where he won decisive victories over the Indians and the main British army at the ‘Battle of New Orleans.’ After losing in the first attempt, he was elected as president of the United States in his second attempt. He was the first president to truly embrace the powers of the presidency. He strongly believed in preserving the union and power of democracy. Although his personal life was highly criticized and remained a cause of discomfort throughout his life, he never surrendered to his opponents and kept fighting until the end of his life. He is regarded as one of the most influential US presidents in history, as well as one of the most aggressive and controversial. He is often referred to as the first ‘people’s president’ for expanding the role of the president from mere executive to an active representative of the people. Ron DeSantis
15th March In History
DID WE MISS SOMEONE?
CLICK HERE AND TELL US
WE'LL MAKE SURE
THEY'RE HERE A.S.A.P
Quick Facts

American People
Political Leaders
American Men
Male Leaders
Pisces Leaders
Childhood & Early Life
He was born on March 15, 1767, in Waxhaw Settlement between North Carolina and South Carolina, British America, to Andrew Jackson and Elizabeth Hutchinson Jackson. He had two elder brothers, Hugh and Robert.
His parents were Scott-Irish colonists who landed in Philadelphia when they immigrated to America in 1765. His father died in an accident in February 1767, three weeks before his birth. His mother died after contracting cholera in 1781 while nursing prisoners of war.
His eldest sibling Hugh died of heatstroke, following the ‘Battle of Stone Ferry’ in 1779. His brother Robert also died in 1781 after contracting smallpox. After being orphaned, he lived briefly with his extended family in Waxhaws.
He received his early education from private tutors. He then attended a local school before studying law in Salisbury, North Carolina in his late teens.
In 1787, after apprenticing with prominent lawyers for three years, he was granted license to practice and moved to Jonesborough. 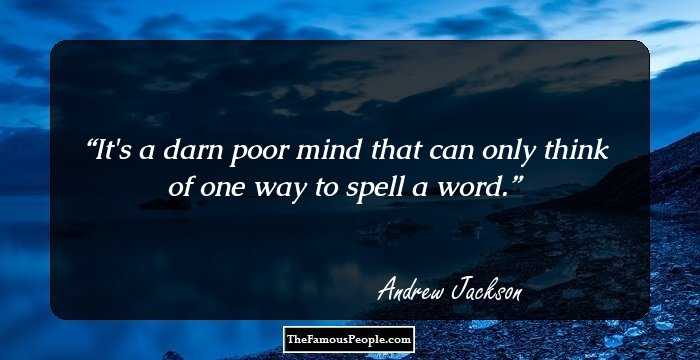 Quotes: Think
Continue Reading Below
Career
In 1796, he was elected as a delegate to the Tennessee constitutional convention. He was elected as Tennessee’s U.S. Representative, after it achieved statehood.
In 1797, he was elected U.S. Senator as a Democratic-Republican, but he resigned within a year.
From 1798 to 1804, he served as the judge of the Tennessee Supreme Court.
Meanwhile, in 1801, he was appointed commander of the Tennessee militia, with the rank of colonel.
He served in the ‘War of 1812’ and his troops defeated the British in New Orleans under his leadership. After this military success, he was appointed Major General.
In 1817, during the ‘First Seminole War,’ he and his troops captured Pensacola, Florida. He was named Florida's military governor in March 1821.
In 1822, he was nominated for presidential elections by the Tennessee legislature and he was also elected as its U.S. Senator. But Jackson lost the 1824 presidential elections to John Quincy Adams.
In 1828, he re-contested for the post of the president and involved John C. Calhoun, Martin Van Buren, and Thomas Ritchie in his campaign. This time, he defeated Adams and became the seventh president of the United States.
For the 1832 elections, he was again nominated as the presidential candidate by the ‘Democratic Party.’ The rechartering of the ‘Second National Bank’ became the primary issue during this election and he vetoed the bill, believing that the bank was basically a corrupt monopoly whose stock was mostly held by foreigners. His decision earned him the favor of the common man and he was re-elected as the president of the United States.
Continue Reading Below 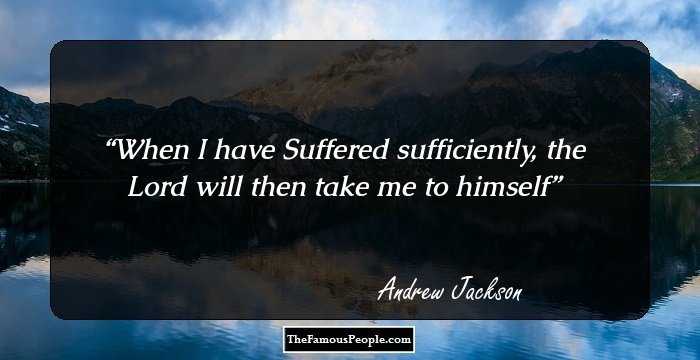 Quotes: Me, Will, I
Major Works
His work as an army commander was commendable and extraordinary. He became a national war hero after defeating the British in New Orleans. He was a strict officer but popular with his troops, which acquired him the popular nickname ‘Old Hickory.’
As the president of the United States, his works were highly respected and admired by the citizens of America. One of his greatest feats as the president was his firm stand in the battle against the monopoly of the ‘Second Bank of the United States.’ He was referred to as the first "citizen-president" who represented the common man.
Awards & Achievements
In 1815, he received the ‘Thanks of Congress’ and a ‘Congressional Gold Medal’ as his war commemorate. 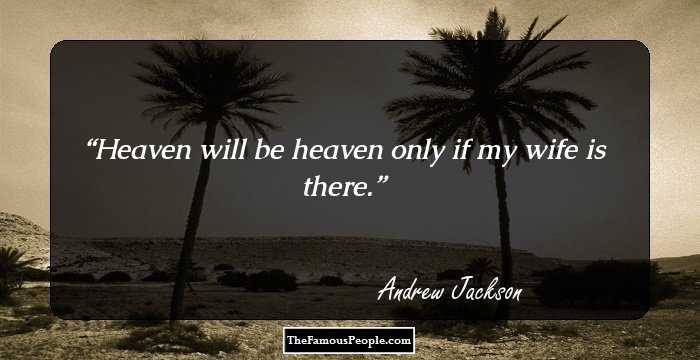 Quotes: Will
Personal Life & Legacy
After his retirement, Jackson stayed active in politics, supporting the presidencies of Martin Van Buren and James K. Polk.
He married Rachel Donelson, an already married woman, whom he believed to have been divorced from her husband after separation. However, the divorce had not been completed, making their marriage invalid. After the divorce procedure was officially completed, they remarried in 1794. They had no biological children.
He adopted three sons; Theodore, an Indian orphan, Andrew Jackson Jr., the biological son of Rachel's brother Severn Donelson, and Lyncoya, a Creek Indian orphan. He also volunteered and became the guardian of eight other children.
Rachel died of heart attack on December 22, 1828. He became grief-stricken and severely depressed after her death. He never remarried.
He died on June 8, 1845, in Nashville, Tennessee, of chronic tuberculosis, dropsy, and heart failure. His body was interred at the Hermitage, Nashville, Tennessee.

Quotes By Andrew Jackson | Quote Of The Day | Top 100 Quotes

See the events in life of Andrew Jackson in Chronological Order