Advanced Search
Upton Sinclair was an American author and social reformer known for his influential political writings that exposed various social injustices in the country. As the son of an alcoholic father, he had a difficult childhood ridden with poverty. His family was also known to frequently move from city to city as his father did not have a proper job. However, he had rich maternal grandparents with whom he lived for extended periods of time. This early childhood experience exposed him to the extreme inequalities that existed between the rich and the poor and, thus, shaped him into a socialist. He was a bright boy with a voracious appetite for reading and would eagerly read anything he could get his hands on. He also began writing jokes and stories as a teenager, and paid his college tuition fees by selling his articles. He was studying law at Columbia University but realized that his actual interest was in writing. A dedicated writer, he spent weeks in disguise to research for a political novel. He had a deep interest in politics but could not find success as a politician. Leaving aside his political dreams he focused on his writing. He wrote a series of novels based on a character named Lanny Budd, and won the Pulitzer Prize for the third book of the series ‘Dragon’s Teeth’. American Celebrities
American Men
Columbia University
Male Writers
Virgo Writers
Childhood & Early Life
Sinclair was born in Maryland to an alcoholic father and a strictly religious mother. He had a difficult childhood. He had to deal with his father’s alcoholism on the one hand, and his mother’s extreme strictness on the other.
His father did not have a regular job and the family was poor. However, his maternal grandparents, with whom he sometimes stayed, were very rich. He became aware of the inequalities between the rich and the poor at an early age.
The young Upton loved reading from a young age, and would read whatever books he could get his hands on. This habit helped him gain a deeper understanding of the world around him.
He joined the City College of New York in 1892 when he was just 14 and graduated in 1897.
He entered Columbia University to study law. There he learnt several languages like Spanish, German and French. He paid his college tuition fees by writing jokes, stories and articles for magazines. 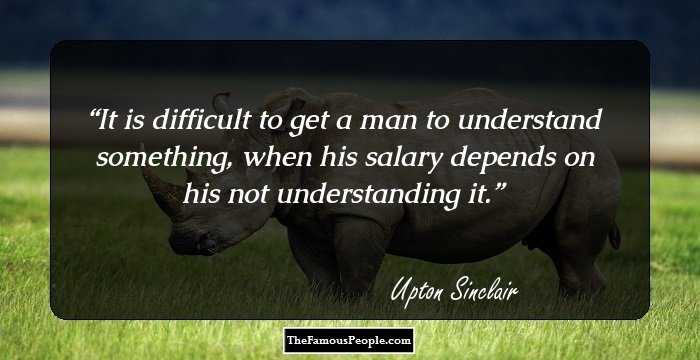 Continue Reading Below
Career
Writing was his true passion, and he wrote four novels in quick succession after leaving Columbia. King Midas (1901), Prince Hagen (1902) and Manassas (1904) received favorable reviews though they did not do well commercially.
In 1902, he developed acquaintance with several members of the Socialist Party of America like Leonard Abbott, George Davis Herron, and Gaylord Wilshire. He was advised to read the works of Karl Marx, Frank Norris, Jack London and Thorstein Veblen, which he did and became a committed socialist.
He was asked by the editor of the socialist journal, ‘Appeal to Reason’ to write a novel on the immigrant workers in the Chicago meat industry. Sinclair worked undercover for seven weeks in 1904 in the meatpacking plants to research for the novel.
‘The Jungle’ was published in 1906. The book exposed the difficult working conditions, absence of employee welfare, and unethical practices in the American meatpacking industry. The novel became a bestseller, and even influenced the then President Theodore Roosevelt’s government to look into the malpractices prevalent in the meatpacking industry. The Pure Food and Drugs Act, and the Meat Inspection Act were passed in 1906.
Using the proceeds from ‘The Jungle’, he founded a socialist community, Helicon Home Colony in Englewood in 1906. The community was, however, burned down in 1907.
Over the next several years, he wrote many novels but none of them were successful until the highly acclaimed ‘King Coal’ in 1917. He described the horrible working conditions prevalent in the coal mining industry during those times.
During the 1920s, he became involved in radical politics and unsuccessfully contested for the U.S. Congress. He read the First Amendment during an Industrial Workers of the World rally in 1923 and was arrested.
He was a member of the Socialist Party from 1902 till 1934 when he became a Democrat. He contested for the California gubernatorial election with his ‘End Poverty in California Movement’ which generated much controversy. However, he lost to Frank Merriam and quit politics.
Leaving his political stint behind him, he started concentrating on his writing career and published a series of novels based on the protagonist, Lanny Budd, starting from 1940. The first book in the series was ‘World’s End’ (1940) followed by ‘Between Two Worlds’ (1942).
Continue Reading Below
The third Lanny Budd book, ‘Dragon’s Teeth’ (1942) dealt with the Nazi takeover of Germany during the 1930s. This book covered the period from 1929 to 1934, and is considered one of his finest works.
He wrote 11 books in the Lanny Budd series, the last of which ‘The Return of Lanny Budd’ was published in 1953. However, other books published after ‘Dragon’s Teeth’ were not able to replicate his earlier success. 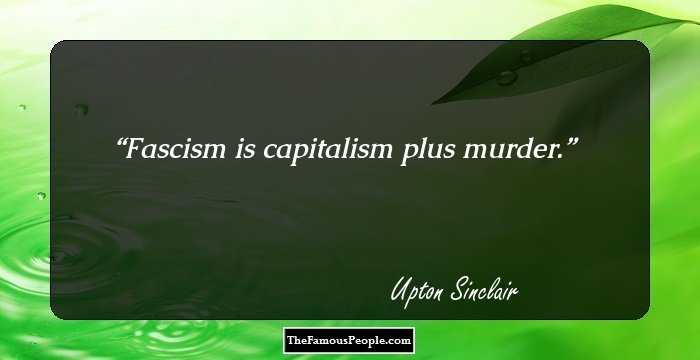 Major Works, Awards & Achievements
His first major work was the 1906 novel ‘The Jungle’. It was based on the American meatpacking industry and became a bestseller and forced the government to pass legislations to regulate the meatpacking industry.
One of the books in the Lanny Budd series, ‘Dragon’s Teeth’ dealt with the life of a socialist during the period of Nazi occupation of Germany. This novel won the Pulitzer Prize - the only major literary award won by the author.
Personal Life & Legacy
He married his childhood friend Meta Fuller in 1902, but she left him years later. They had one son.
He married for the second time in 1913. He had a long and happy married life with Mary Craig Kimbrough till her death in 1961.
He wed again after his second wife’s death. His third wife was Mary Elizabeth Willis.
He lived a long life and died in at an age of 90. 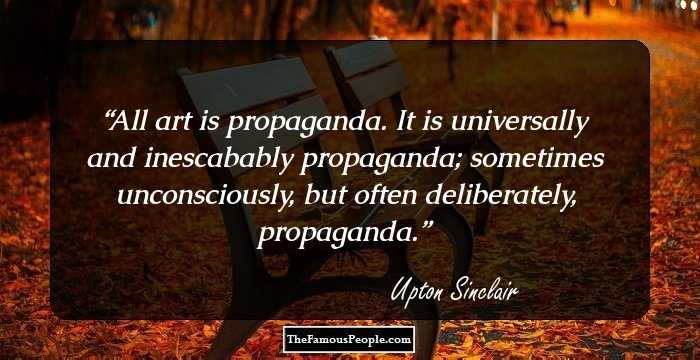 Quotes: Art
Trivia
His novel ‘Wet Parade’ was adapted into a film of the same name in 1932.
He was interested in health and nutrition, and experimented with various diets. He even wrote a book on this topic.
He was considered a muckraker known for his investigative journalism.

Quotes By Upton Sinclair | Quote Of The Day | Top 100 Quotes

See the events in life of Upton Sinclair in Chronological Order