Ernest Hemingway was a Nobel Prize-winning American writer who touched the pinnacle of fame with his novel ‘The Old Man and the Sea’ which catapulted him to international glory. Over the course of his writing career, he published seven novels, six short story collections, and two non-fiction works which greatly influenced later generation of writers. Many of his works were published posthumously and most of them are considered classics of American literature. Born as the first son to well-educated and well-respected parents in Illinois, he had a comfortable childhood during which he developed a keen interest in reading and writing. As a school student, he excelled in English and was a regular contributor to his school newspaper ‘Trapeze’ and the yearbook ‘Tabula.’ An athletic boy, he also took part in boxing, track and field, water polo, and football. He decided early on that he wanted a career in writing and started off as a journalist before becoming a writer of short stories and novels. He went on to serve in ‘World War I’ as an ambulance driver in the ‘Italian Army’ before returning to America and establishing himself as a distinguished fiction writer. In spite of his professional success as a writer, Hemingway’s personal life was a constant struggle with numerous broken marriages and bouts of depression. Deeply troubled by his personal sufferings, he committed suicide in 1961. Lauren Graham
21st July In History
DID WE MISS SOMEONE?
CLICK HERE AND TELL US
WE'LL MAKE SURE
THEY'RE HERE A.S.A.P
Quick Facts

American Celebrities
Novelists
Non-Fiction Writers
Short Story Writers
American Men
Childhood & Early Life
Ernest Miller Hemingway was born on July 21, 1899, in Oak Park, Illinois. His father, Clarence Edmonds Hemingway, was a physician and his mother, Grace Hall Hemingway, was a musician. Both his parents were greatly respected in their conservative community.
He had an interesting childhood as his father taught him to hunt, fish, and camp in the woods and lakes of Northern Michigan. His mother’s insistence that he receive music lessons, however, irritated the young boy.
He attended ‘Oak Park and River Forest High School’ from 1913 to 1917. He excelled in English and actively contributed to his school newspaper ‘Trapeze’ and the yearbook ‘Tabula.’ He also participated in a variety of sports like boxing, track and field, water polo, and football. 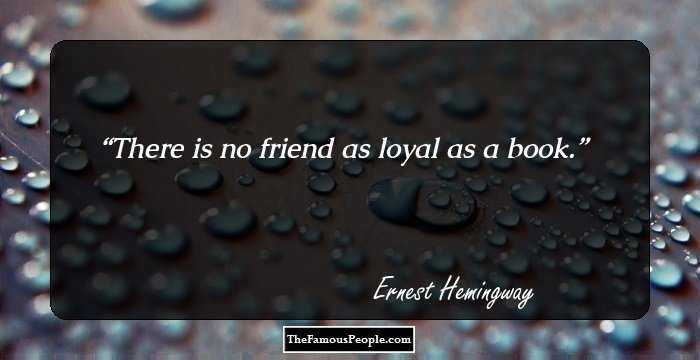 Continue Reading Below
Major Works
His novel ‘A Farewell to Arms,’ set during the Italian campaign of ‘World War I,’ is considered one of his first major critically acclaimed success. The book, which revolves around a love affair between the expatriate American Henry and Catherine Barkley against the backdrop of ‘World War I,’ became his first best-seller.
‘For Whom the Bell Tolls’ is one of his best-known works. The novel tells the story of a young American attached to a republican guerrilla unit during the ‘Spanish Civil War.’ Death is the primary theme of the novel.
His novel ‘The Old Man and the Sea’ was his last major work of fiction to be published in his lifetime. It is also one of his most famous works. The story revolves around an aging fisherman who manages to catch a huge fish but is unable to enjoy his success as his catch gets eaten up by the sharks. 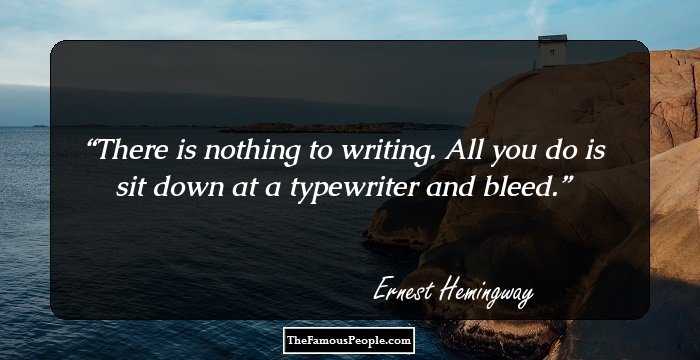 Quotes: You
Awards & Achievements
Ernest Hemingway was awarded a ‘Bronze Star’ for his bravery during ‘World War II’ in 1947.
He won the ‘Pulitzer Prize’ in 1952 for the novel ‘The Old Man and the Sea.’
In 1954, Hemingway was awarded the ‘Nobel Prize in Literature’ for “his mastery of the art of narrative, demonstrated in The Old Man and the Sea, and for the influence that he has exerted on contemporary style.”
Personal Life & Legacy
Ernest Hemingway was married four times. His first wife was Elizabeth Hadley Richardson whom he married in 1921. The couple had one son. Hemingway was involved in an affair with Pauline Pfeiffer during this marriage. When his wife came to learn of it, she divorced him.
Soon after his divorce, he married Pauline Pfeiffer in 1927. They had two sons. Hemingway was not faithful to Pauline either and developed a relationship with Martha Gellhorn which led to his divorce from Pauline in 1940.
Continue Reading Below
Shortly after his second divorce, he tied the knot with Martha Gellhorn. A successful journalist in her own right, Gellhorn resented being referred to as Hemingway’s wife. Over the course of this marriage, she started an affair with U.S. paratrooper Major General James M. Gavin and divorced Hemingway in 1945.
His fourth and final marriage was to Mary Welsh in 1946. The couple remained married till Hemingway’s death.
Ernest Hemingway’s final years were marked by ill health and depression. He was treated for numerous conditions, such as high blood pressure and liver disease, and also struggled with deteriorating mental health. He became increasingly suicidal in 1961 and shot himself to death on the morning of July 2, 1961. 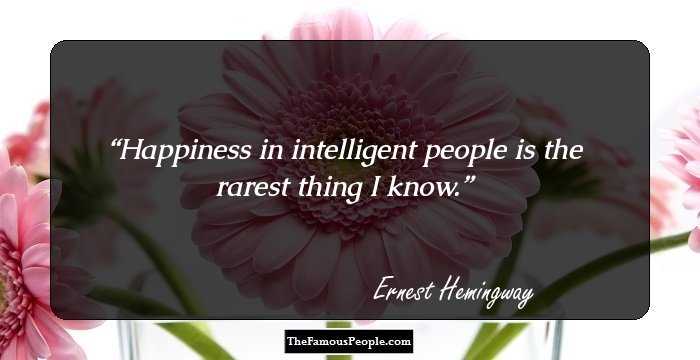 Quotes: Happiness, I
Career
After leaving high school, he joined ‘The Kansas City Star’ as a cub reporter. He worked there for only six months but learned several valuable lessons that would help him in developing his own unique style of writing.
When the ‘World War I’ broke out, he enlisted as an ambulance driver for the ‘American Red Cross.’ Though he was grievously injured while serving in the ‘Austro-Italian Front,’ he assisted others to safety. He was honored with the ‘Italian Silver Medal of Bravery.’
He returned home in 1919 and then accepted a job in Toronto where he worked as a freelancer, staff writer, and foreign correspondent for the ‘Toronto Star Weekly.’ He continued writing stories for the publication even after moving to Chicago in September 1920.
In 1921, Hemingway was hired as a foreign correspondent for the ‘Toronto Star’ and moved to Paris. It was in Paris that he embarked on a full-fledged career as a writer and wrote 88 stories within a span of 20 months! He covered the ‘Greco-Turkish War’ and wrote travel pieces. He published his first book ‘Three Stories and Ten Poems’ in 1923.
He wrote prolifically over the next few years, publishing several novels, short-stories, and contributing to various journalistic publications. In 1929, his novel ‘A Farewell to Arms’ was published. The book became very popular, cementing his reputation as a writer of engaging fiction.
He continued writing throughout the 1930s, bringing out novels, such as ‘Death in the Afternoon’ (1932), ‘The Short Happy Life of Francis Macomber’ (1936), and ‘To Have and Have Not’ (1937). He also engaged in a lot of adventure, including big-game hunting in Africa, bullfighting in Spain, and deep-sea fishing in Florida.
The 1940s were also very eventful for him. He began the decade with the publication of one of his most famous works, ‘For Whom the Bell Tolls’ in 1940. ‘World War II’ was going on at that time and when the U.S. entered the war in 1941, Ernest Hemingway served as a correspondent. In this position, he witnessed several moments of historical importance, including the D-Day landing.
He published the novel ‘The Old Man and the Sea’ in 1952. The novel played a major role in winning him the ‘Nobel Prize for Literature.’ The 1950s were a very difficult period for him as he suffered from acute depression and other health problems. He died in 1961.
Recommended Lists:
Writers #6
Media Personalities #456

Quotes By Ernest Hemingway | Quote Of The Day | Top 100 Quotes

See the events in life of Ernest Hemingway in Chronological Order