Advanced Search
Thomas Wade ‘Tom’ Landry was a famous American football player and a more famous coach. He was known for brining in new techniques and coaching methods in American football and made a name for himself in National Football League (NFL). He served for a good 30 years as the head coach for the Dallas Cowboys and gave the team its 20 uninterrupted successes. He was born and brought up in Texas by his middle class parents. His father was an auto machine mechanic and used to play football in his younger days. He went to the University of Texas to study industrial engineering but his studies were interrupted when he decided to take part in World War II. He played football in his college and university days before getting signed on by the Yankees team. He was also a player-assistant coach for the New York Giants and it was here that he realized that coaching the players was his real calling. He was inducted into the Pro Football Hall of Fame for his perfect coaching techniques and innovative ideas. He was married to his high school sweetheart Alicia Wiggs and remained married to her until he died after struggling with leukemia for many years. American Celebrities
American Men
University Of Houston
University Of Texas At Austin
American Coaches
Childhood & Early Years
Tom Landry was born on September 11, 1924 in Mission, Texas, to Ray Landry and Ruth Landry. His father was a mechanic and suffered from rheumatism but he was an athlete in his younger days and played football.
Landry studied in Mission High School, Texas, and played as a quarter back for his school’s football team. The school’s football stadium is now called ‘Tom Landry Stadium’ and is home to Mission Eagles.
Landry went to the University of Texas, Austin, and did his major in industrial engineering. Although, he always wanted to go to SMU but he never did because he did not want his friends and family to be inaccessible to him and his football matches.
Landry left his education in order to pursue United States Army Air Corps at the time of World War II. He did this in order to honor the sacrifice of his brother Robert Landry at the time of ‘Pearl Harbor’.
When he was 19, he was sent to Iowa to be trained as a co-pilot. There he earned his Second Lieutenant rank and did 30 missions and during one of these missions in Belgium he survived a crash landing.
In 1946, he went back to the University of Texas to finish his studies. There he played football as a fullback and defensive back.
He graduated from the University of Texas in 1949 and in the next three years he completed his post graduate degree in industrial engineering from the University of Houston. 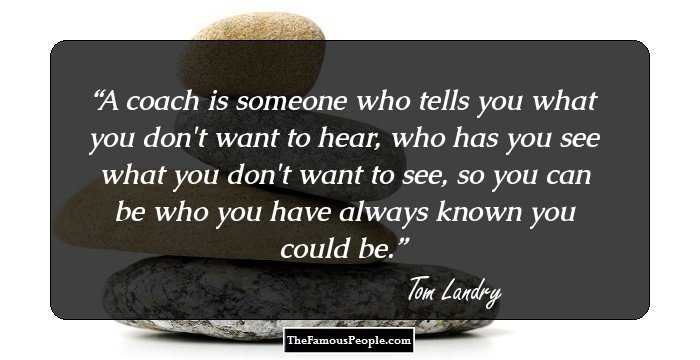 Quotes: You
Continue Reading Below
Career
In 1949, Landry played in the All American Football Conference for the New York Yankees and then next year changed his team to New York Giants as he was already drafted as the ‘future picks’ by the NYG.
Just after he finished his graduation, Landry was offered to play for the Yankees by the Yankee coach Jack White. He was offered 6000 US dollars and a bonus of 500 US dollars.
In 1949, Landry was taken up by the New York Giants on the basis of their territorial rights to select someone in a dispersal draft. It was here that he was coached under Steve Owen and got his first indirect coaching experience.
The 1953 season was a real bad one for the New York Giants and Coach Steve Owen lost his job as a result of this. Landry was selected as an all-pro in 1954. Throughout 1954 and 1955 he was a player-assistant coach with the new head coach Jim Hee Howell.
In 1960, Landry got into the coaching profession and became the first head coach of the Dallas Cowboys and coached the team for a total of 29 seasons. He worked closely along with the general manager Tex Schramm.
In 1964, Landry signed a 10-year contact with the Dallas Cowboys, an offer made to him by the owner of the team Clint Murchison Jr., even though Dallas was not even performing well under his coaching.
In 1965, the ten year extension proved to be a right move from Murchison’s side as the Dallas Cowboys improved substantially under Landry and they made a record of 7-7 win.
In 1966, Dallas Cowboys made to the National Football League championship game after they posted 10 wins in NFL. Although the team lost to the Green Bay Packers but their improvement was remarkable.
From 1971- 1979, Landry made Dallas Cowboys play according to his innovative coaching techniques, in the super Bowl championships. They won their first Super Bowl against Miami and second win against Denver.
Continue Reading Below
In 1980, under the coaching of Landry, Dallas Cowboys kept winning consecutively but in the late 1980s the team lost three main games in a row, which affected Landry’s position in the team and with the owners.
In 1984, the Dallas Cowboys was bought by Bum Bright from the Murchison but the team suffered from many defeats, which exposed Landry and his coaching techniques to a lot of public criticism.
In 1989, Landry was fired from the position of head coach even though he was looking to coach the team for another reason. The team lso changed hands from Burn Bright to Jerry Jones.
In 1990, due to Landry’s impeccable coaching for 30 years, his name was placed into the Pro Football Hall of Fame. During the same time he was also inducted into the ‘Ring of Honor’, Texas. 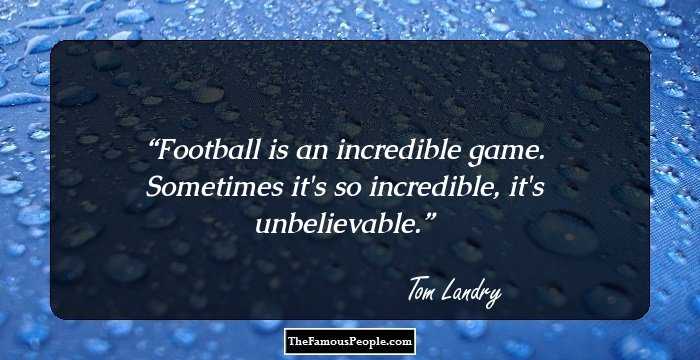 Personal Life & Legacy
Landry got married to his high school sweetheart Alicia Wiggs in 1949. They both had three children together, Tom Jr., Kitty and Lisa. The couple was married for 51 years until Landry’s death.
Landry died on February 12, 2000 due to leukemia. His funeral service took place at Highland Park United Methodist Church. In the Texas State Cemetery, Austin, a cenotaph is dedicated to him.
Trivia
Landry battled with leukemia for many years.
An elementary school in Valley Ranch is named in the honor of Landry.
Landry refused many offers to enter into Ring of Honor before accepting it in 1993.
From the bonus that he got out of the Yankees offer to play for them, Landry paid for his wedding to Alicia Wiggs. 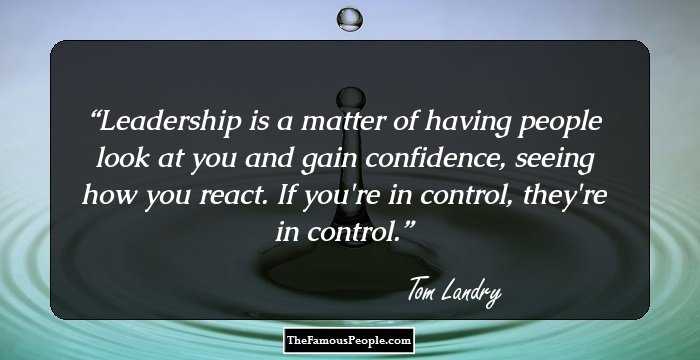 See the events in life of Tom Landry in Chronological Order