(Former American Football Player, Coach and Only Athlete to Play in Both 'Super Bowl' and 'World Series')

Deion Sanders is a retired American sportsman who played both football and baseball simultaneously at the professional level. He holds the honor of being the only sportsman to have ever participated in both ‘World Series’ and ‘Super Bowl.’ While at college, he used to play three sports—football, basketball, and baseball—and was an all-state honoree in all three sports. In 1989, he turned professional in two of the three sports, football and baseball. He was drafted by the ‘Atlanta Falcons’ in the NFL draft. Shortly afterwards, he also signed a contract to play baseball with the ‘New York Yankees.’ Simultaneously, he played for both the teams and became the first ever sportsman to hit a major league home run and achieve a touchdown within a week’s time. He retired as a player and founded the ‘Prime Prep Academy Charter School’ where he coached until 2015 when the school was shut down due to financial insolvency. Currently, he works as an NFL Network analyst. Deion Sanders was born on August 9, 1967, in Fort Myers, Florida, USA, to Mims Sanders and Connie Knight. His mother later married Willie Knight who proved to be a very positive influence on young Deion.

He went to ‘North Fort Myers High School’ in Florida where he started playing a number of sports, including football, basketball, and baseball. He was named in the ‘Florida High School Association All-Century Team’ in 1985.

He attended the ‘Florida State University’ where he became the All-American Cornerback twice in 1987 and 1988. He also won the ‘Jim Thorpe’ award. 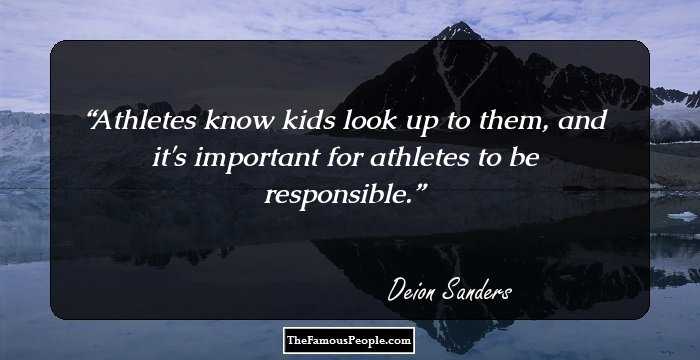 His professional career started in 1989. He was drafted by the ‘New York Yankees’ first and later went on to play for the ‘Atlanta Braves.’ During the 1989 season, he hit a major league home run. The same year, he also started his professional football career.

In football, he was drafted by the ‘Atlanta Falcons’ during the 1989 NFL Draft. He played with the team till 1993. While playing for the team, he achieved 24 passes. He also reached the end zone ten times during this period, which included three defensives.

During the 1991 MLB Season, he hit a key three-run homer to score a comeback win against the ‘Pittsburgh Pirates’ in July while playing with the ‘Braves.’

The 1992 season was his most productive one in baseball. He hit 304 for the team and stole 26 bases and scored 14 triplets in 97 matches. In spite of his amazing performance, his team ultimately lost to the ‘Toronto Blue Jays.’

He signed to play football for one season with ‘San Francisco 49ers’ in 1993-94. This proved to be his best season in football as he recorded six interceptions, 303 yards, and three touchdowns. He was voted the 1994 ‘NFL Defensive Player of the Year.’

After the 1997 season, he did not play baseball for three years. During the season, he stole 56 bases in 115 games.

He returned to play baseball for the ‘Cincinnati Reds’ in 2001. As he was playing both baseball and football simultaneously, he had to quit one of the sports in order to focus on the other. He retired from baseball that year.

He scored an interception return touchdown, his ninth overall, during the ‘Buffalo Bills’ in 2004. After playing for two seasons, he retired in 2006 and became an analyst for the NFL Network.

Sanders and his wife were seen in the reality show ‘Deion & Pilar: Prime Time Love’ in 2008.

He co-founded ‘Prime Prep Academy,’ a grouping of charter schools in Texas, in 2012.

During the 2014 ‘Pro Bowl,’ he served as an alumni captain for ‘Team Sanders.’

He won the ‘Lip Sync Battle’ against Justin Bieber in 2015. 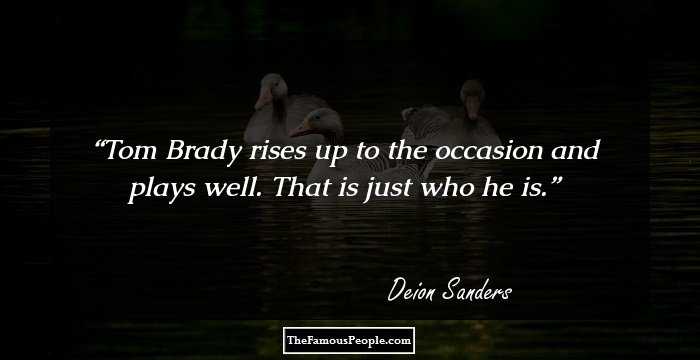 He won the ‘Jim Thorpe Award,’ a prestigious college football award, in 1988.

He is the only sportsman in history to have played in both ‘Super Bowl’ and the ‘World Series.’

He was first married to Carolyn Chambers. The couple had two children.

He tied the knot for the second time with Pilar Biggers. This marriage produced three children. The couple divorced and Sanders was granted the custody of their three children.

Known for his flashy jewelry and showy suits, he has appeared in several television commercials and endorsed brands like ‘Pepsi,’ ‘Nike,’ ‘Burger King,’ etc.

In 2012, he started dating Tracey Edmonds. 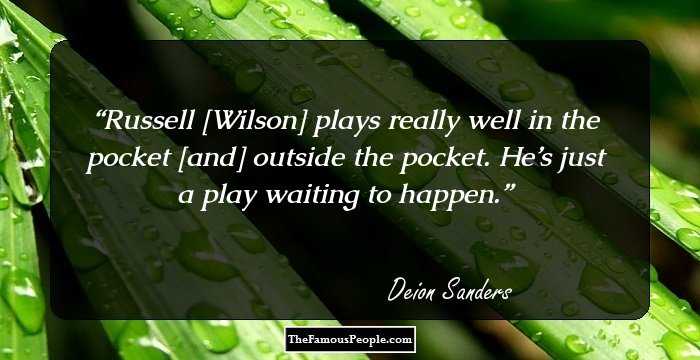 This sportsman, who has played both football and baseball on a professional level, is affectionately called ‘Prime Time.’

Quotes By Deion Sanders | Quote Of The Day | Top 100 Quotes

See the events in life of Deion Sanders in Chronological Order