Advanced Search
Brett Lorenzo Favre is a former football quarterback who played for different teams like the Atlanta Falcons, Green Bay Packers, and New York Jets in the National Football League (NFL) over a career spanning two decades. He had an exceptionally long and productive career with the Green Bay Packers for whom he played from 1992 till 2007. It was evident from his childhood that the young Brett was destined for greatness as a sportsman. He started playing football and baseball while at school and could play quarterback, lineman, strong safety and place-kicker position. His father, who was the head coach of the school football team, encouraged his talented son to practice and develop his game. He started playing professional football during his years in the University of Southern Mississippi. First drafted by the Atlanta Falcons, he moved on to play for the Green Bay Packers with whom he would spend the best of his playing years. He played for 16 seasons for the team and helped them appear in two Super Bowls, eventually winning the Super Bowl XXXI. A dynamic player with exceptional skills and leadership qualities, he led his teams to eight division championships and five NFC Championship Games. He is the only quarterback to have won three consecutive NFL most valuable player awards. American People
American Men
Tall Celebrities
Tall Male Celebrities
Male Sportspersons
Childhood & Early Life
He was the son of Irvin Favre and his wife Bonita, both of whom were school teachers. He had three siblings.
He attended Hancock North Central High School. As a child he played both baseball and football but played for the school’s baseball team. His father Irvin was the head coach of the football team and motivated his son to play well.
He received a scholarship from the University of Southern Mississippi after completing high school. He played ten games in the starting position during his freshman year and won six of them. He was involved in a serious car accident which nearly threatened to cut short his career. However, he recovered and returned to the sport he loved so much.
He graduated with a teaching degree with an emphasis in special education from the university. 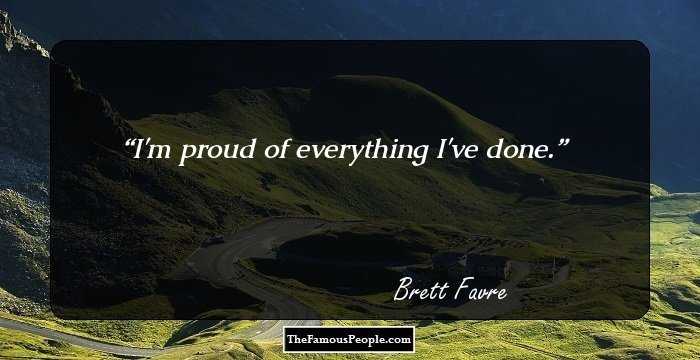 Continue Reading Below
Career
He was drafted by the Atlanta Falcons in the 1991 NFL Draft. He was with them for only one season before being traded off to the Green Bay Packers in 1992.
The team’s starting quarterback, Don Majkowski was injured during a game against the Cincinnati Bengals in 1992 and Favre replaced him. In spite of a poor start, he went on to complete a 42 yard pass to Sterling Sharpe. He also threw the winning touchdown pass.
He helped the team achieve a six-game winning streak during the 1992 season which they ended with 9-7. The 1993 season was also a productive one for Favre and he was named to his second Pro Bowl. He had the first 400 yard passing game of his career.
He led the Packers to a 11-5 record in 1995 which was the team’s best record in thirty years. He achieved a personal milestone when he passed for a career high of 4,413 yards, 38 touchdowns, and recorded a quarterback rating of 99.5.
During the Super Bowl XXXI in 1996, he completed 14 of 27 passes for 246 yards and 2 touchdowns. He also completed an 81-yard touchdown pass to Antonio Freeman in the second quarter and rushed for 12 yards and another touchdown, enabling the team to win the game. The team continued its positive performances over the next few years.
He played in a Monday Night Football game in 2003 against the Oakland Raiders. He passed for four touchdowns and 399 total yards in a 41-7 victory over the Raiders.
The Packers defeated the Kansas City chiefs 33-22 in 2007 making Favre the only 3rd quarterback to have defeated all 31 other current NFL teams. The same year he led his team to a 37-26 win over the Lions.
He officially announced his retirement in 2008. However, he came back from retirement to play for New York Jets and Minnesota Vikings for a short while before health issues forced him to retire again in 2011. 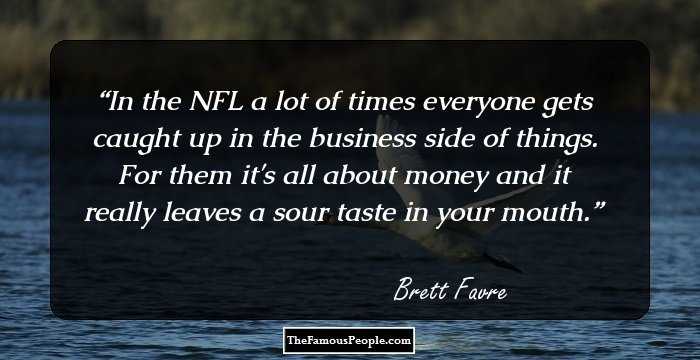 Awards & Achievements
He was named the Associated Press Most Valuable Player (MVP) thrice (1995, 1996, and 1997).
He holds several NFL records including most pass touchdowns (508), Most pass yards (71,838), and Most pass completions (6,300).
Personal Life & Legacy
He married Deanna Tynes in 1996. They have two daughters. He became a grandfather in 2010—the first active NFL player to have grandchildren.
He established the Brett Favre Fourward Foundation in 1996 which has donated more than $2 million to charities in his home state, Mississippi and also in Wisconsin.
He was awarded the Chris Greicius Celebrity Award from the Make a Wish foundation for his involvement with the youth who suffer from serious illnesses. 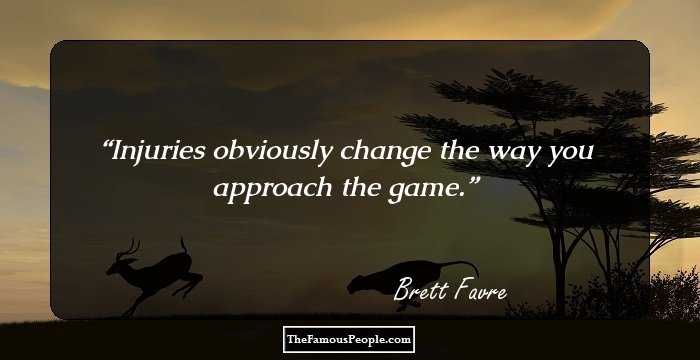 Quotes By Brett Favre | Quote Of The Day | Top 100 Quotes

See the events in life of Brett Favre in Chronological Order