Advanced Search
Srinivasa Ramanujan was an Indian mathematician who made significant contributions to mathematical analysis, number theory, and continued fractions. What made his achievements really extraordinary was the fact that he received almost no formal training in pure mathematics and started working on his own mathematical research in isolation. Born into a humble family in southern India, he began displaying signs of his brilliance at a young age. He exceled in mathematics as a school student, and mastered a book on advanced trigonometry, written by S. L. Loney, by the time he was 13. While in his mid-teens, he was introduced to the book ‘A Synopsis of Elementary Results in Pure and Applied Mathematics’ which played an instrumental role in awakening his mathematical genius. By the time he was in his late-teens, he had already investigated the Bernoulli numbers and had calculated the Euler–Mascheroni constant up to 15 decimal places. He was, however, so consumed by mathematics that he was unable to focus on any other subject in college and thus could not complete his degree. After years of struggling, he was able to publish his first paper in the ‘Journal of the Indian Mathematical Society’ which helped him gain recognition. He moved to England and began working with the renowned mathematician G. H. Hardy. Their partnership, though productive, was short-lived as Ramanujan died of an illness at the age of 32. Bhāskara II
DID WE MISS SOMEONE?
CLICK HERE AND TELL US
WE'LL MAKE SURE
THEY'RE HERE A.S.A.P
Quick Facts

Cause of Death: Amoebiasis

Indian Celebrities
Mathematicians
Indian Men
University Of Madras
Trinity College, Cambridge
Childhood & Early Life
Srinivasa Ramanujan was born on 22 December 1887, in Erode, Madras Presidency, British India, to K. Srinivasa Iyengar and his wife Komalatammal. His family was a humble one and his father worked as a clerk in a sari shop. His mother gave birth to several children after Ramanujan, but none survived infancy.
Ramanujan contracted smallpox in 1889 but recovered from the potentially fatal disease. As a young child, he spent considerable time in his maternal grandparents’ home.
He started his schooling in 1892. Initially, he did not like school. However, he soon started exceling in academics, especially mathematics.
After passing out of ‘Kangayan Primary School,’ he enrolled at ‘Town Higher Secondary School’ in 1897. He soon discovered a book on advanced trigonometry, written by S. L. Loney, which he mastered by the time he was 13. He proved to be a brilliant student and won several merit certificates and academic awards.
In 1903, he got his hands on a book titled ‘A Synopsis of Elementary Results in Pure and Applied Mathematics’ by G.S. Carr which was a collection of 5000 theorems. He was thoroughly fascinated by the book and spent months studying it in detail. This book is credited to have awakened the mathematical genius in him.
By the time he was 17, he had independently developed and investigated the Bernoulli numbers and had calculated the Euler–Mascheroni constant up to 15 decimal places. He was no longer interested in any other subject as he became totally immersed in the study of mathematics.
He graduated from ‘Town Higher Secondary School’ in 1904 and was awarded the ‘K. Ranganatha Rao’ prize for mathematics by the school's headmaster, Krishnaswami Iyer.
He went to the ‘Government Arts College,’ Kumbakonam, on scholarship. However, he was so preoccupied with mathematics that he could not focus on any other subject, and failed in most of them. Due to this, his scholarship was revoked.
He later enrolled at ‘Pachaiyappa's College’ in Madras where he exceled in mathematics, but performed poorly in other subjects. He failed to clear his Fellow of Arts exam in December 1906. He then left college without a degree and continued to pursue independent research in mathematics. 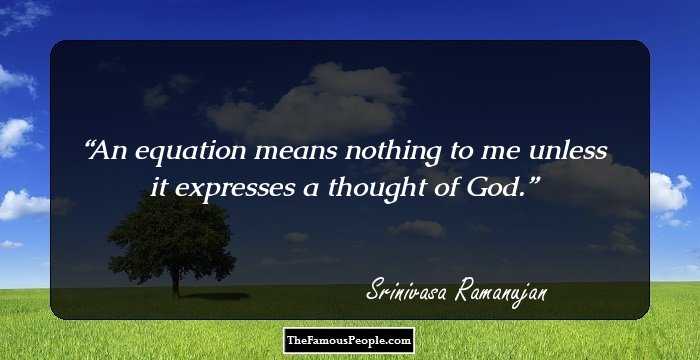 Continue Reading Below
Later Years
After dropping out of college, he struggled to make a living and lived in poverty for a while. He also suffered from poor health and had to undergo surgery in 1910. After recuperating, he continued his search for a job.
He tutored some college students while desperately searching for a clerical position in Madras. Finally, he had a meeting with deputy collector V. Ramaswamy Aiyer who had recently founded the ‘Indian Mathematical Society.’ Impressed by the young man’s works, Aiyer sent him with letters of introduction to R. Ramachandra Rao, the district collector for Nellore and the secretary of the ‘Indian Mathematical Society.’
Rao, though initially skeptical of the young man’s abilities, soon changed his mind after Ramanujan discussed elliptic integrals, hypergeometric series, and his theory of divergent series with him. Rao agreed to help him get a job and also promised to financially fund his research.
Ramanujan landed a clerical post with the ‘Madras Port Trust,’ and continued his research with financial help from Rao. His first paper, a 17-page work on Bernoulli numbers, was published with the help of Ramaswamy Aiyer, in the ‘Journal of the Indian Mathematical Society’ in 1911.
The publication of his paper helped him gain attention. Soon, he was popular among the mathematical fraternity in India. Wanting to explore further in mathematics, Ramanujan began a correspondence with the acclaimed English mathematician Godfrey H. Hardy in 1913.
Hardy was impressed with Ramanujan’s works and helped him get a special scholarship from the ‘University of Madras’ and a grant from ‘Trinity College,’ Cambridge. Thus Ramanujan traveled to England in 1914 and worked alongside Hardy who mentored and collaborated with the young Indian.
In spite of having almost no formal training in mathematics, Ramanujan’s knowledge of mathematics was astonishing. Even though he had no knowledge of the modern developments of the subject, he effortlessly worked out Riemann series, elliptic integrals, hypergeometric series, and the functional equations of the zeta function.
However, lack of formal training also meant that he had no knowledge of doubly periodic functions, the classical theory of quadratic forms, or Cauchy’s theorem. Also, several of his theorems on the theory of prime numbers were wrong.
In England, he got the opportunity to interact with other gifted mathematicians like Hardy. Subsequently, he made several developments, especially in the partition of numbers. His papers were published in European journals, and he was awarded a Bachelor of Science degree by research in March 1916 for his work on highly composite numbers. His brilliant career was cut short by his untimely death.
Continue Reading Below 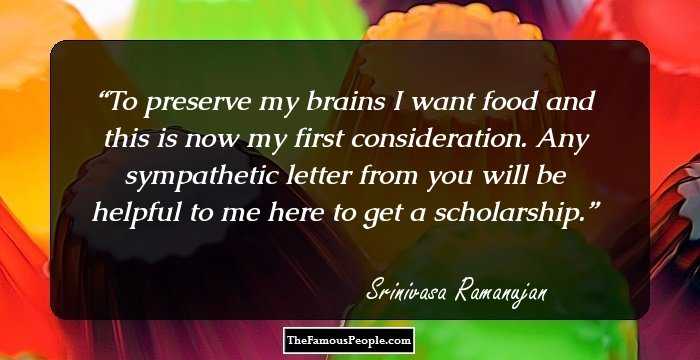 Major Works
Considered a mathematical genius, Srinivasa Ramanujan was often compared with the likes of Leonhard Euler and Carl Jacobi. Along with Hardy, he studied the partition function P(n) extensively and gave a non-convergent asymptotic series to permit exact computation of the number of partitions of an integer. Their work led to the development of ‘circle method,’ a new method for finding asymptotic formulae.
Awards & Achievements
He was elected a Fellow of the Royal Society in 1918; he became one of the youngest Fellows in the history of the Royal Society. He was elected "for his investigation in Elliptic functions and the Theory of Numbers."
The same year, he was also elected a Fellow of Trinity College—the first Indian to be elected. 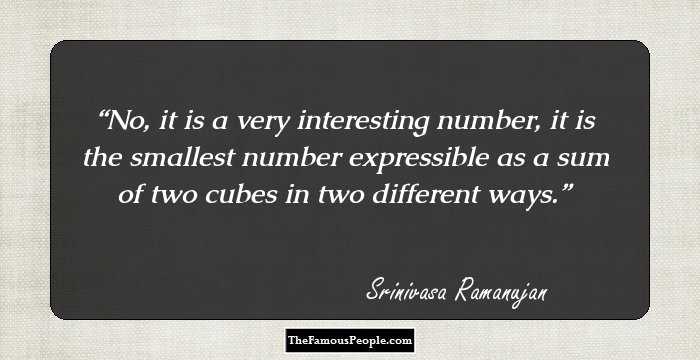 Personal Life & Legacy
He married a ten-year-old girl named Janakiammal in July 1909 when he was in his early-20s. The marriage was arranged by his mother. The couple did not have any children, and it is possible that the marriage was never consummated.
Ramanujan suffered from various health problems throughout his life. His health declined considerably while he was living in England as the climatic conditions did not suit him. Also, he was a vegetarian and found it extremely difficult to obtain nutritious vegetarian food in England.
He was diagnosed with tuberculosis and suffered a severe vitamin deficiency during the late-1910s. He returned to Madras in 1919. He never fully recovered and breathed his last on 26 April 1920, aged just 32.
His birthday, 22 December, is celebrated as ‘State IT Day’ in his home state of Tamil Nadu. On his 125th birth anniversary, India declared his birthday as 'National Mathematics Day.'
Continue Reading Below
Top 10 Facts You Did Not Know About Ramanujan
Ramanujan was a lonely child in school as his peers could never understand him.
He hailed from a poor family and used a slate instead of paper to jot down the results of his derivations.
He did not receive any formal training in pure mathematics!
He lost his scholarship to study at ‘Government Arts College’ as he was so obsessed with mathematics that he failed to clear other subjects.
Ramanujan did not possess a college degree.
He wrote to several prominent mathematicians, but most of them did not even respond as they dismissed him as a crank.
He became a victim of racism in England.
The number 1729 is called Hardy-Ramanujan number in his honor, following an incident pertaining to a taxi with this number.
A biographical film in Tamil language, based on Ramanujan’s life, was released in 2014.
Google honored him on his 125th birth anniversary by replacing its logo with a doodle on its home page.

Quotes By Srinivasa Ramanujan | Quote Of The Day | Top 100 Quotes

See the events in life of Srinivasa Ramanujan in Chronological Order