Nizar Qabbani had been a prolific writer throughout his life. This Syrian poet had devoted his life to writing and penned some brilliant verses that still make the Arab Literary world proud. Since a very early age, he began to express his emotions and thoughts through the medium of poetry. He was deeply hurt when his sister committed suicide, but the reason behind it impacted him more. When he emerged as a poet, he tried to voice his opinions on women’s rights through his poetry. Almost all his writings are dominated with feminism and he, very well portrayed the plight of women in contemporary society. He was courageous enough to put forth his ideology to the society, even though they were bold and way ahead of their times. His advocacy of women and the way he composed his poems got him tangled in various controversies. However, this could neither put an end to his thoughts nor could it change the manner in which he wrote. This writer also represented his country as an ambassador to many other nations. However, he later quit his job as a diplomat and dedicated his life to write distinct and exceptional pieces of literature. His poetry will continue to be immortal for many more decades in the hearts of literature lovers. 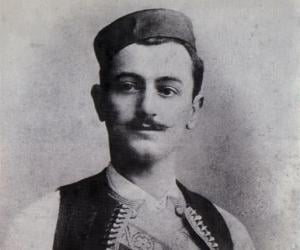 Syrian Celebrities
Poets
Syrian Men
Damascus University
Male Poets
Childhood & Early Life:
Nizar Qabbani was born on 21st March 1923, in Damascus, Syria, in a mercantile family. His father Tawfiq Qabbani was the owner of a chocolate factory, and the Arabian writer Abū Khalīl Qabbānī was his great uncle.
He had five siblings, including sisters Haifa and Wisal, as well as brothers Rashid, Sabah and Mu’taz.
During the period 1930-41, he attended the ‘National Scientific College School’ which was owned by Ahmad Munif al-Aidi, a friend of his father.
He then moved to the ‘Damascus University’ which was previously known as ‘Syrian University’ to pursue his studies in law. He started writing poetry during his time here, and in 1944 he published his first compilation of poems titled ‘The Brunette Told Me’.
The content of these poems were controversial to the Damascus society. However, these poems were approved by the Education Minister Munir al-Ajlani, who was also an acquaintance of his father, and supported Qabbani. This minister also helped Nizar by writing the preface to his collection of poems. 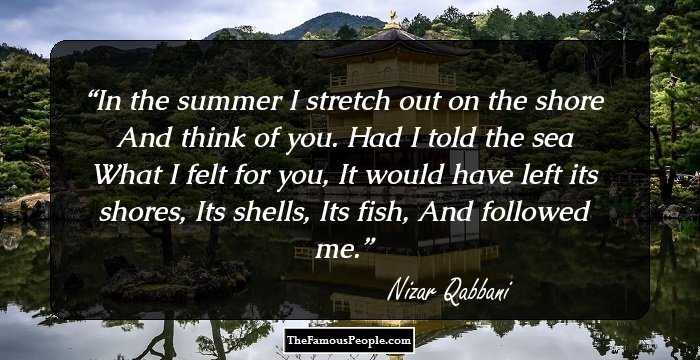 Quotes: You, Me, Think, I
Continue Reading Below
You May Like

Who Is The Greatest Female Warrior In History?
Career:
After completing his L.L.B. from ‘Damascus University’ in 1945, he served at the Foreign Ministry of Syria as an Ambassador to cities such as Cairo, Istanbul, Madrid, and London.
During the period 1948-50, he penned three critically acclaimed works of Arabic literature. Qabbani started with the poem ‘Childhood of a Breast’ and followed it with two others, namely ‘Samba’ and ‘You Are Mine’.
His collection named ‘Poems by Nizar Qabbani’ was published in 1956, and it is considered to be one of most significant works by the famous poet.
In 1959, he was appointed as the Vice-secretary of the Chinese embassies United Arab Republic (UAR).
During the 1960s, Nizar came up with three poems, namely ‘My Beloved’, ‘Drawing with Words’ and ‘Diary of an Indifferent Woman’.
In 1966, he resigned from his services as an ambassador to various nations, thus, putting an end to his diplomatic career, and continued with his poetic work.
He founded his own publishing house in 1967, at Beirut and named it after himself as ‘Manshurat Nizar Qabbani’. The same year, the Arabs lost the battle to Israel in the ‘Arab-Israel War’, and this became one of the themes of Qabbani’s poems.
He published around nine collections of poems in the 1970’s which included works such as ‘Savage Poems’, ‘Book of Love’, ‘100 Love Letters’, ‘Poems Against The Law’, ‘To Beirut the Feminine’, ‘With My Love’, and others.
The most prolific years of this poet were the 1980s when he penned almost a dozen publications like ‘I Write the History of Woman Like So’, ‘The Lover’s Dictionary’, and ‘A Poem For Balqis’ - which was written in the memory of his second wife, Balqis al-Rawi.
Continue Reading Below
The same decade also saw the release of poems such as ‘Love Does Not Stop at Red Lights’, ‘Insane Poems’, ‘Poems Inciting Anger’, Love Shall Remain My Lord’, ‘The Trilogy of the Children of the Stones’, Secret Papers of a Karmathian Lover’, ‘Biography of an Arab Executioner’, ‘I Married You, Liberty!’, ‘A Match in My Hand, And Your Petty Paper Nations’ and ‘No Victor Other Than Love’.
During the early 1990s, Nizar produced poems such as ‘Do You Hear the Cry of My Sadness?’, ‘Marginal Notes on the Book of Defeat’, ‘I’m One Man and you are a Tribe of Women’, ‘Fifty Years of Praising Women’, ‘Nizarian Variations of Arabic Maqam of Love’ and ‘Alphabet of Jasmine’. 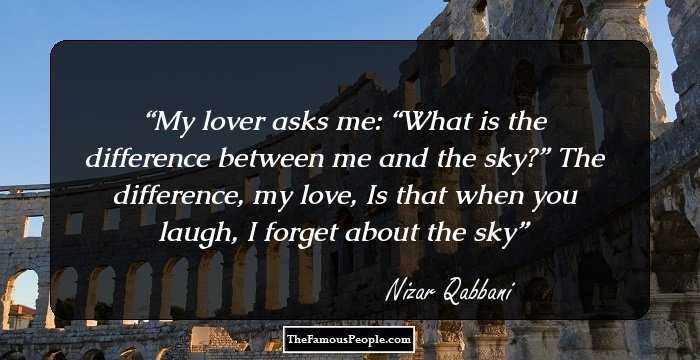 Quotes: You, Me, Love, I
Major Works:
His sister had committed suicide since her attempt to defy the traditional obligation of marrying against her will failed. This incident had a deep impact on young Qabbani, and is said to be the reason behind the feminist influence in his poems.
His 1956 released work ‘Poems by Nizar Qabbani’ has been regarded as one of his finest literary works. These poems advocate and respect a women’s point of view and also speak against hollow male prejudices.
Personal Life & Legacy:
Qabbani first got married to one of his cousins named Zahra Aqbiq. The couple had two children, a son named Tawfiq and a daughter called Hadba.
This poet got married for the second time in 1973 to a woman named Balqis al-Rawi. He had encountered her at a poetry concert in Baghdad. However, in 1981, she became the victim of a bombardment during the ‘Lebanese Civil War’ in Beirut and lost her life.
The poet was shattered after the death of his second wife and he moved out of Beirut. He then travelled to places like Paris and Geneva and finally settled in London.
This great thinker was reported to have been unwell for about a year and on 30th April 1998, he died of heart failure. 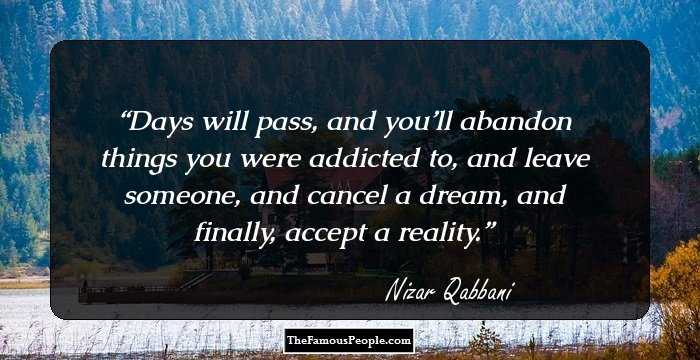 Quotes: You, Will
Trivia:
His works have been translated in different languages such as English and Nepali.
You May Like

Quotes By Nizar Qabbani | Quote Of The Day | Top 100 Quotes

See the events in life of Nizar Qabbani in Chronological Order