(Satirist & Author of 'Gulliver's Travels',' A Tale of a Tub' and 'A Modest Proposal')

Jonathan Swift, one of the foremost prose satirist in the English language, was also a reputed political pamphleteer, essayist, poet and cleric. Born in Ireland, he lost his father early on in life and was mostly brought up by his uncle. However, with the advent of the Glorious Revolution in Ireland, he was forced to move to England, where he secured employment under Sir William Temple. Here he got a taste of high living and power play. As a young man he often travelled back and forth between Ireland and England. Later, he entered the Church of Ireland, which at that time was a poor cousin of the Church of England. To secure the rights of his church, he began to write pamphlets and finally entered the political arena. However, his political ambition was not long lived and he returned to England for a short period. Soon he was back to Ireland where he became the Dean of St. Patrick Cathedral, a position he held until his death. As a writer, most of his works were written under pseudonyms. Today, he is best remembered for his prose satire, ‘Gulliver’s Travel.’ Bram Stoker
DID WE MISS SOMEONE?
CLICK HERE AND TELL US
WE'LL MAKE SURE
THEY'RE HERE A.S.A.P
Quick Facts

British People
Irish People
Novelists
Essayists
Non-Fiction Writers
British Men
Childhood & Early Years
Jonathan Swift was born on 30 November 1667 in Dublin, Ireland. His father, also named Jonathon Swift, was originally from Goodrich, Herefordshire, and his mother, Abigail Erick, was from Frisby on the Wreake, a village in Leicestershire. He had an elder sister named Jane.
The Swifts belonged to a family of royalists from England and when their estate was destroyed by the Roundheads towards the end of the English Civil War, Senior Jonathan Swift had followed his elder brother Godwin to Ireland, seeking a career in law. There he had secured a modest post of a Steward of the King's Inn.
Sr. Jonathan Swift had died in the spring of 1667 and Jonathan Jr. was born in the following November. Left with no resources of her own, his mother left him in care of Godwin, by then a respected attorney in Dublin and went back to England.
In 1673, Jonathan was enrolled at the Kilkenny Grammar School, which at that time was one of the most prestigious schools in Ireland. Before that, he had spent some years in England with his nurse. At school, he excelled in languages and enjoyed studying literature. 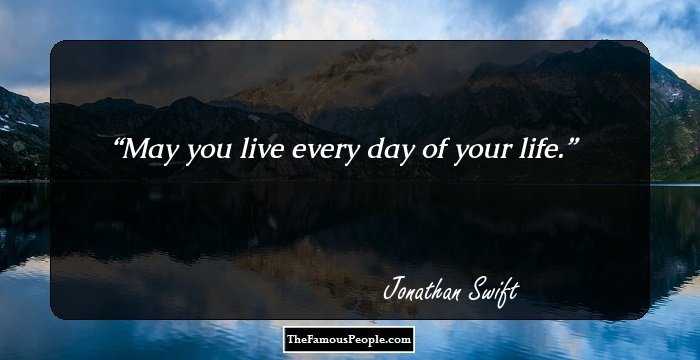 Quotes: You, Life
Continue Reading Below
In Moor Park, England
On reaching England, Jonathan Swift contacted his mother, who had by then settled in Leicester and for whom he still retained some tenderness. By that time, Godwin Swift had died and although his son Willoughby provided some assistance, it became imperative that Swift should now become independent.
Mrs. Swift was related to the wife of English Statesman Sir William Temple, who, by that time, had retired from active service and was living in his country estate in Moor Park, Surrey, writing his memoire. Sometime towards the end of 1689, Jonathan Swift secured a position in Sir William Temple’s household.
Initially, he acted as the amanuensis for Sir William and also kept the household accounts. However, he soon became ill and returned to Ireland in 1690. Most probably, it was the beginning of Ménière's disease, which plagued him all through his life.
In Ireland, he first looked for fresh employment, but was not able to secure any. Therefore, he returned to England and in the autumn of 1691, accepted employment under Sir William Temple once again. This time, he gained the confidence of his master and his position was improved.
Swift was now consulted on various important matters. His master also introduced him to King William III and often sent him to London on various important issues. With his help, Swift also completed his studies, receiving his M.A. degree in 1692 from Hart Hall, Oxford.
Sometime now, Swift also took up his pen for the first time. He began with writing poetries and then shifted to short essays and finally in 1694, he started working on his first book, ‘A Tale of Tub’. However, he was not happy.
Although his employment at the Moor Park was otherwise satisfactory, giving him ample free time and allowing him entry into higher society, he started hankering for better employment. Therefore, in 1694, he left Moor Park and moved to Ireland.
There on 25 October 1694, he was ordained a deacon by the Bishop of Kildare. Later on 13 January 1695, he was appointed to the prebend of Kilroot in the Diocese of Connor near Belfast.
However, the situation was still far from satisfactory. His living was not only poor, but also being isolated in a remote community, far away from the center of power, suffocated him. Therefore, he returned once more to Moor Park in May 1696.
Continue Reading Below
He now started helping Sir William Temple in writing his memoire and also in its publication. During this time, Swift also wrote ‘The Battle of the Books’ in response to criticism of Sir William Temple's ‘Essay upon Ancient and Modern Learning.’ However, neither of his books was published before 1704.
Temple died on 27 January 1699. Swift remained in England in connection with his work on Temple’s memoire for few more months. Thereafter, he unsuccessfully approached King William for some kind of employment. 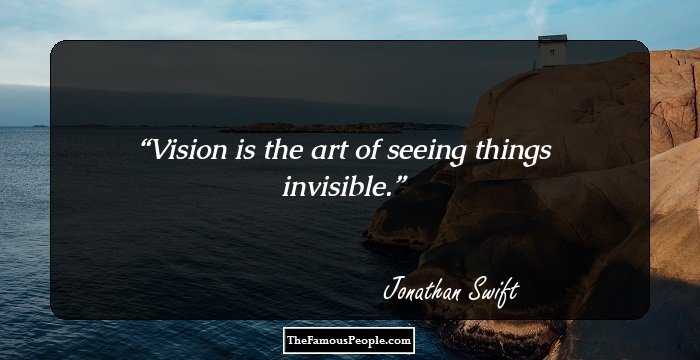 Quotes: Art
As A Writer
Finally, unable to get anything worthwhile, Swift accepted the post of secretary and chaplain to the Earl of Berkeley, one of the Lords Justice of Ireland. Unfortunately, when he made the long journey from England to Ireland, he learned that somebody else had been appointed in his place.
Though disappointed he remained in Ireland and in 1700, he obtained the position of the prebend of Dunlavin in St Patrick's Cathedral, Dublin. Concurrently, he was chaplain to Lord Berkeley.
In 1702, Swift received his Doctor of Divinity degree from Trinity College, Dublin. Since the congregation was very small, he did not have much to do and having ample time on his hand he now concentrated on writing.
However, as chaplain to Lord Berkeley, he often had to travel to Dublin and London. In 1704, while on a visit to England, he had ‘A Tale of a Tub’ and ‘The Battle of the Books’ published anonymously. Although the Church of England disapproved them, they became widely popular.
Entering Politics
Subsequently, Jonathan Swift became politically active and visited London several times from 1707 to 1710. His main mission was to persuade the Whig government to extend the benefits enjoyed English clergies to their Irish counterparts. However, he was not successful in that.
Then in 1710, when the Tories came to power, Swift was appointed the editor of ‘The Examiner’ and served the newspaper from November 1710 to 1714. He was also included in the inner circle of the Tory government and was involved in many important decision-making meetings.
Continue Reading Below
Meanwhile in November 1711, he published ’The Conduct of the Allies and of the Late Ministry in Beginning and Carrying on the Present War’, in which he attacked the Whig government for failing to end the war with France.
He continued with his literally pursuits and in 1713 established Scriblerus Club with Alexander Pope, John Gay, and John Arbuthnot. It was an informal association of authors and he became one of its core members. 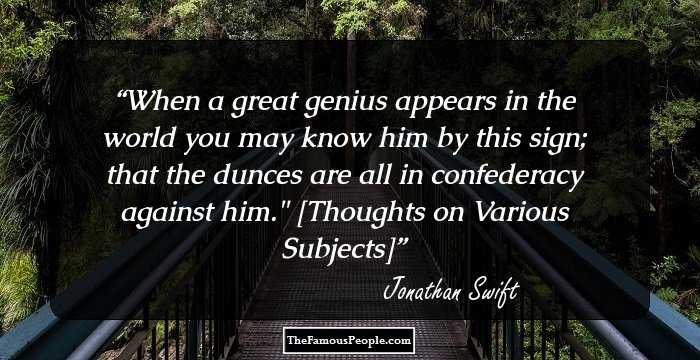 Quotes: You
Back to Ireland
Jonathan Swift had hoped that his services to the Tories would be rewarded with a church appointment in England. However, it failed to materialize mainly due to opposition from Queen Anne. At the same time, it became clear that the Tories would soon lose power.
Therefore when in 1713, he was appointed Dean of St. Patrick’s Cathedral, Dublin, Swift decided return to Ireland. Initially, he was very unsatisfied and compared his situation to a poisoned rat in a hole. As a result, he did not write for a long time.
Later, he started writing pamphlets to espouse the Irish causes. Although they made him an Irish patriot, the government did not approve it and tried to silence him using various methods. His ‘Drapier's Letters’ is a collection of seven such pamphlets.
Concurrently, he also began his masterpiece, ‘Travels into Several Remote Nations of the World, in Four Parts by Lemuel Gulliver, first a surgeon, and then a captain of several ships.’ Published in 1726, it became better known as ‘Gulliver's Travels.’
In 1728, Esther Johnson, his longtime companion, died. It was followed by series of deaths, which troubled Swift to a great extent. He soon lost interest in affairs of England and instead concentrated on writing pamphlets in support of the Irish cause.
In 1729, he published ‘A Modest Proposal for Preventing the Children of Poor People from Being a Burthen to Their Parents or Country, and for Making Them Beneficial to the Publick’. Popularly known as ‘A Modest Proposal’ it was his last major work.
Continue Reading Below
Major Works
’Gulliver’s Travels’, first published on 28 October 1726 and then amended in 1735, is his most famous work. Considered a classic of English literature, many mistakenly consider it to be a children’s book. In reality, it is a prose satire, which he wrote "to vex the world rather than divert it."
His ‘A Modest Proposal’ is also a straight face satire. It not only mocks the British policy toward the Irish, but also the heartless attitudes harbored towards the poor.
Personal Life & Legacy
While living at Moor Park, Jonathan Swift met eight-year-old Esther Johnson, whose widowed mother was the companion to Sir William Temple's sister, Lady Giffard. Initially, he acted as her tutor and gave her the nickname, Stella. Slowly, despite the difference in age, they became close friends.
Later, from October 1702, Esther, now twenty years old, began to live with him in his house in Ireland. Although many suspected them to be married secretly, there is no evidence of that. Moreover, Rebecca Dingley, another member of William Temple's household, also lived in the same house with them.
Meanwhile in 1707, while he was staying in London, he met Esther Vanhomrigh, whom he called Vanessa. For 16-17 years they had an intense relationship; but when in 1723, she asked him not to see Stella, he refused. This put an end to their relationship.
It is believed that during this period, he also had a relationship with Anne Long, said to be Vanessa’s cousin. They first met in Vanessa’s house in 1707 and later a friendship developed between them. However, it never reached the same intensity as his relationship with Vanessa or Stella.
Jonathan Swift was most affected when Stella died on 28 January 1728. He sat beside her bed, composing prayers, and as a tribute to her, he wrote ‘The Death of Mrs. Johnson.’ Later he had her buried at the St. Patrick Cathedral.
Death soon became a regular feature in his life and in 1731, he wrote his own obituary ‘Verses on the Death of Dr. Swift.’ Then from the later part of the decade, he began to show sign of illness; both physical and mental.
In 1742, Swift had a stroke and lost his speech. Thereafter, his mental condition became so worse that guardians had to be appointed to take care of his affairs.
He remained in such conditions for almost three years before he died on October 19, 1745. Later he was buried at St. Patrick's Cathedral next to his beloved Stella.
Over the years, his works influenced many authors and intellectuals, among them John Ruskin and George Orwell.
Swift crater, located on Deimos, one of two moons around Mars, has been named in his honor mainly because he had predicted the existence of these moons long before they were discovered.
Trivia
Trim, where Swift lived for a long time, recurrently holds a satirical festival called Trim Swift Festival.
Recommended Lists:
Essayists #24
Writers #118

Quotes By Jonathan Swift | Quote Of The Day | Top 100 Quotes

See the events in life of Jonathan Swift in Chronological Order