Advanced Search
Adrian Mitchell is one of the finest poets and playwrights that the world of English literature has ever seen. His poetry dominated the English ‘Campaign for Nuclear Disarmament’ movement for decades. Mitchell was a pacifist and he realised this when he was engaged in his service with the ‘Royal Air Force’. His poems had a universal appeal, and one of his poems ‘To Whom It May Concern’ is relevant till date, which had been modified many times by the poet himself in accordance with recent events. He was against the notion that war could bring order, peace, and the like, and tried his level best to propagate this idea through his writings. He was more prolific as a playwright than a poet, and his first play was staged when he was only nine years old. This undoubtedly indicates his creativity as a playwright, his knowledge of the stage and its settings. He was a writer who was able to relate to children and even penned some well-known plays and poems, which still continue to amuse the young population. His works have been acclaimed and appreciated around the world. Many renowned institutions have recognized and acknowledged him for his contributions to the literary domain Sophie Hunter
DID WE MISS SOMEONE?
CLICK HERE AND TELL US
WE'LL MAKE SURE
THEY'RE HERE A.S.A.P
Quick Facts

British Celebrities
Playwrights
British Men
Male Poets
Scorpio Poets
Childhood & Early Life:
Adrian Mitchell was born to Jock Mitchell and Kathleen Fabian on 24th October 1932, at a place located near Hampstead Heath. His father was a research chemist, while his mother was a school teacher.
He attended the ‘Monkton Combe School’, located in the English city of Bath, and later joined the ‘Greenways School’. While studying in ‘Greenways School’, his first play ‘The Animals’ Brain Trust’ was performed. Mitchell was only nine years old back then.
Adrian, then, entered the ‘Dauntsey’s School’ located in Wiltshire, and there, he and his friend Gordon Snell composed and performed a number of plays.
In 1951, he was recruited to the ‘Royal Air Force’, though he did not intend to enter ‘RAF’. His tenure with the defence force lasted for a year.
Later, he pursued his studies in English at the ‘Christ Church’ college, an institution affiliated to the ‘Oxford University’. He was appointed as an editor of the university’s ‘Isis Magazine’ while studying there. He also chaired the poetry society of the university.

Quotes: I
Continue Reading Below
Career
After Adrian completed his graduation from the ‘Oxford University’, he was recruited by the newspaper ‘Oxford Mail’ for the post of a reporter. He worked with the daily for a period of two years, from 1955 to 1957. He then joined the English daily ‘Evening Standard’ in London, and worked with it for about three years.
Soon after, he penned his first novel and also first play for television, and gradually, started to work as a freelance journalist, by writing for newspapers and tabloids such as ‘Daily Mail’, ‘Sun’ and ‘Sunday Times’. However, he resigned from his journalism career during the 1960s, and concentrated on his literary works by composing poems, stories and plays.
One of his prominent works of this time was, the novel titled ‘If You See Me Coming’, which he penned in 1962.
During the period 1963-67, he was an instructor at the ‘Writers Workshop’ in the ‘University of Iowa’. This was followed by his engagement at the ‘University of Lancaster’ as a ‘Granada Fellow in the Arts’.
The 1970’s also saw the release of three more novels of the writer, namely ‘Wartime’, ‘Bodyguard’ and ‘Man Friday’.
This poet has composed a large number of poems which include works targeted at children. He had been prolific as a playwright, and the number of plays he has scripted exceeds his collection of poems and novels.
Mitchell was a fellow of the ‘Centre for the Humanities’ division of the ‘Wesleyan University’, in the year 1972.
He worked as a resident writer at the ‘Sherman Theatre’, Cardiff for a period of one year during 1974-75. He was later associated with the ‘Billericay Comprehensive School’, as a visiting writer.
He became a ‘Judith E. Wilson Fellow’ at the ‘Cambridge University’ in the year 1980, and continued being a part of the university for one year.
Continue Reading Below
The playwright was appointed as the resident writer at the ‘Unicorn Theatre for Children’ in 1982, and resumed the role for a year.
In the year 1995, he was the ‘Fellow in Drama’ at ‘Nanyang University’, Singapore. The same year, he was also the ‘Dylan Thomas Fellow’ for the ‘UK Year of Literature’, Swansea. Adrian even earned a fellowship for a course in Drama at the ‘Nanyang University’ at the same time.
He modified novelist C.S. Lewis’ story and composed the play ‘The Lion, The Witch and The Wardrobe’. This work was staged in 1998.
In 1999, his works ‘Dancing in the Street: A Poetic Party' and ‘Draft as a Doughnut’ were published, the former being poetry for children and the latter, a children’s play.
His collection of poems entitled ‘All Shock Up: Poems 1997-2000’ came into print in the year 2000. Four years later, another collection of poems of Adrian ‘The Shadow knows: Poems 2001-2004’, were available for the readers. 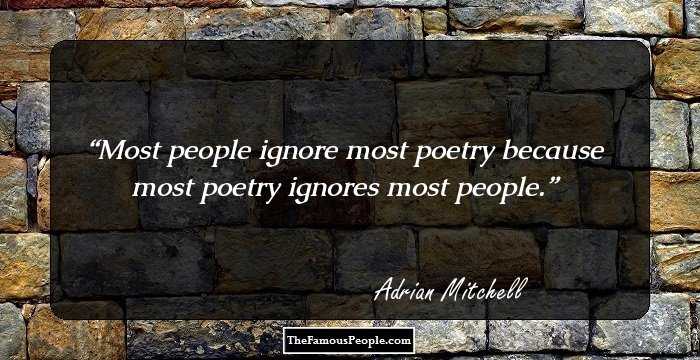 Major Works
Adrian Mitchell penned the poem ‘To Whom It May Concern’, which is one of his most renowned works. This is a satirical poem which has an anti-war tone and was written at a time when thousands of people lost their lives in the ‘Vietnam War’ in the guise of bringing in peace, democracy, order and freedom.
This poem was first recited in the year 1965, to a large audience at ‘Royal Albert Hall’, London. This has been modified several times in accordance with the on-going wars and can be related to every war of the present times. It manifests how war can have a physical as well as psychological impact on people.
Awards & Achievements
He received the ‘Eric Gregory Award’ in the year 1961, and five years later, he was awarded the ‘PEN Prize’ for translation.
In 1971, he was honoured with the ‘Tokyo Festival Award’ for Television. He also received the ‘Gold Medal of the Theatre of Poetry’
In the year 1997, he was awarded with an honorary degree by the ‘North London University’.
This writer was given the title ‘Shadow Poet Laureate’ by the ‘Red Pepper Magazine’. He was also designated with the ‘Best Collection of Children’s Poetry’ by the ‘Poetry Book Society’ in the year 2004. The following year, his work ‘Draft as a Doughnut’ was shortlisted for the ‘CLPE Poetry Award’. 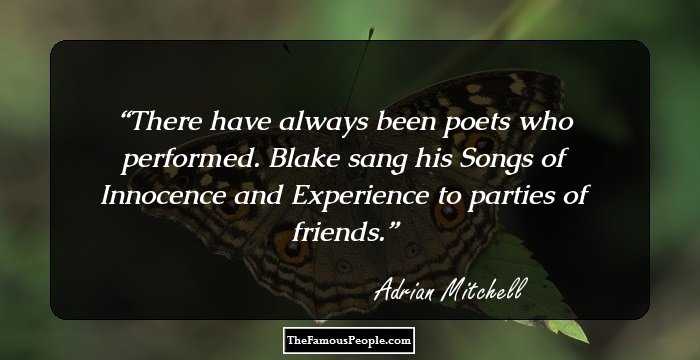 Personal Life & Legacy
He first married a woman named Maureen Bush, and the couple were blessed with three children named Danny, Briony and Alistair.
Later, he married Celia Hewitt with whom he has two daughters named Beattie and Sasha. Celia is an actress and also owns a book shop named ‘Ripping Yarns’, which is located at Highgate.
On 28th December 2008, this writer died of a heart attack and the whole literary world suffered a huge loss and grieved over his death.
The year 2012, saw the publication of Mitchell’s volume of poems ‘Come on Everybody: Poems 1953-2008’, which was published posthumously
Recommended Lists:
Film & Theater Personalities #20973

Quotes By Adrian Mitchell | Quote Of The Day | Top 100 Quotes

See the events in life of Adrian Mitchell in Chronological Order