As the actor who personified evil in his chilling portrayal of a cannibalistic killer in ‘The Silence of the Lambs’, Anthony Hopkins is regarded as one of the greatest actors alive. This highly celebrated character actor started his career as a stage performer. Impressed by the young man’s talents and dedication, the great British actor Laurence Olivier invited him to be his understudy at The Royal National Theatre. The young Anthony thrived under the guidance of the senior actor and was on the way to making it big as a theatre artist. However, he was bored of playing the same kind of roles and desired a change. He gradually moved away from the stage and entered the world of television and movies. He made his television debut in the BBC production of the play ‘A Flea in Her Ear’ and played a minor role in the short film ‘The White Bus’. He got his first major role in ‘The Lion in Winter’ which was a commercial as well as critical success. He went on to portray a variety of on-screen characters over his long and successful acting career. He reached the peak of success when he played the brilliant psychiatrist turned cold-blooded murderer Hannibal Lecter in ‘The Silence of the lambs’ for which he won an Academy Award. In a career spanning over six decades, he has earned numerous awards and accolades, including an 'honourary Golden Globe,' two 'Academy Awards,' two 'Primetime Emmy Awards,' three 'British Academy Film Awards,' a star on the 'Hollywood Walk of Fame,' a 'Laurence Oliver Award,' and 'BAFTA Fellowship.' Tom Ellis
DID WE MISS SOMEONE?
CLICK HERE AND TELL US
WE'LL MAKE SURE
THEY'RE HERE A.S.A.P
Quick Facts 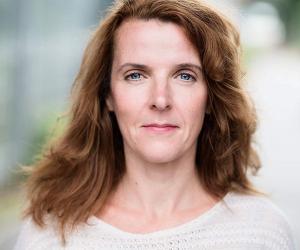 Anthony Hopkins was born on December 31, 1937. He is the son of Richard Hopkins, a baker and his wife Muriel Anne. Growing up he was very close to his grandfather.

He was dyslexic. He liked to paint and play the piano but was not interested in studies.

His parents sent him to West Monmouth Boys School in 1949, to teach him some discipline. But he left the school after some months and continued his education at Cowbridge Grammar School.

A chance meeting with Welsh actor Richard Burton made him realize his interest in acting, and he enrolled at the Royal Welsh College of Music and Drama in Cardiff. He graduated in 1957.
He served in the British Army for two years and went to London where he attended The Royal Academy of Dramatic Art. 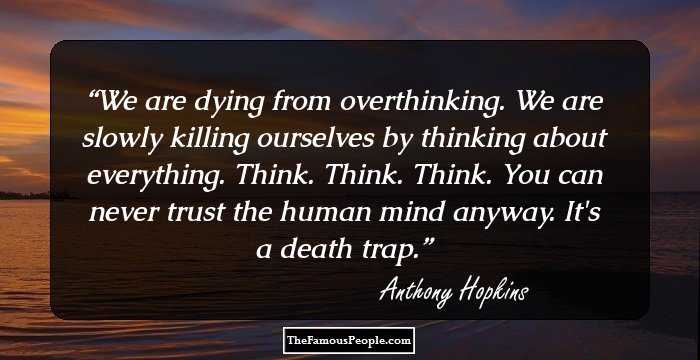 Anthony Hopkins began his career in 1960, with the play ‘Have a Cigarette’ produced by the Palace Theatre, Swansea.

The celebrated British actor Sir Laurence Olivier recognized the potential of the young man and took him as an understudy at the Royal National Theatre in 1965.
He was having a successful time at the theatre, but soon got bored of the monotony. He desired to break into the world of television and films and acted in the televised broadcast of the play ‘A Flea in Her Ear’ in 1967.
He made his film debut as Richard the Lionheart in ‘The Lion in Winter’ in 1968. The movie was a huge success.
His performance got him noticed, and he received many movie offers. He appeared in three movies within the year 1969: ‘The Looking Glass War’, ‘Hamlet’ and ‘Department S’.

He portrayed the soul-searching Pierre Bezukhov in the television drama series ‘War and Peace’ (1972-73) based on Leo Tolstoy’s novel of the same name. His performance earned him critical praise.

In 1991, he portrayed the cannibalistic serial killer Hannibal Lecter in Jonathan Demme’s ‘The Silence of the Lambs’ adapted from Thomas Harris’s thriller novel of the same name. He won various awards for this role.
Continue Reading Below

Anthony Hopkins played James Stevens in the 1993 film ‘The Remains of the Day’. The film was reviewed very positively and received several Academy Award nominations.

He portrayed the U.S. president Richard Nixon in the 1995 biographical film, ‘Nixon’. The director Oliver Stone felt that Hopkins was the best person to play the role, and was proved right when the film got nominated for several prestigious awards.
He acted in many other highly successful movies in the late 1990s, including ‘Amistad’ (1997), ‘The Mask of Zorro’ (1998) and ‘Meet Joe Black’ (1998).
This prolific actor was already over 60 years of age by the dawn of the new millennium, yet he never showed any signs of slowing down. He reprised the role of Hannibal Lecter in ‘Hannibal’ (2001), and ‘Red Dragon’ (2002).

In 2005, he played the lead role in the biographical film The World’s Fastest Indian, which is based on the life of the New Zealand speed bike racer Burt Munro.

For the 2019 biographical film Two Popes, he won an Academy Award nomination, while for The Father (2020), he became the oldest Best Actor nominee (Academy Awards). 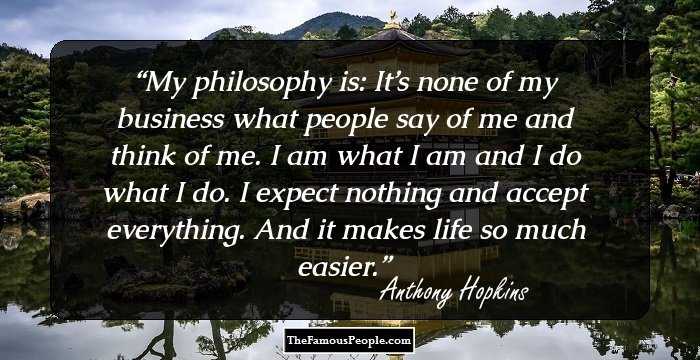 Quotes: Life, Me, Think, Business, I
Continue Reading Below
Major Works
He is critically acclaimed for his role of the cold blooded serial killer Hannibal Lecter in the multiple Academy award winning film ‘The Silence of the Lambs’ (1991). His character in the movie is considered the number one film villain of all times.

In the 1993 biographical movie ‘Shadowlands’, Anthony Hopkins was appreciated for his sensitive and poignant portrayal of the Oxford academic C.S.Lewis. This film earned him the BAFTA Award fro Best Actor in a Leading Role.

His award-winning portrayal of the New Zealand speed bike racer Burt Munro in the biographical movie ‘The World’s fastest Indian’ (2005) is one of his personal favourites.

Anthony Hopkins won the Academy Award for Best Actor in a Leading role for his portrayal of Hannibal Lecter in ‘The Silence of the Lambs’ in 1991.

He was presented The Cecil B. DeMille Award in 2006, for his “outstanding contributions to the world of entertainment".

Anthony Hopkins has won Best Actor (Academy Awards) nomination for the films The Remains of the Day, Nixon, Amistad, The Two Popes and The Father. 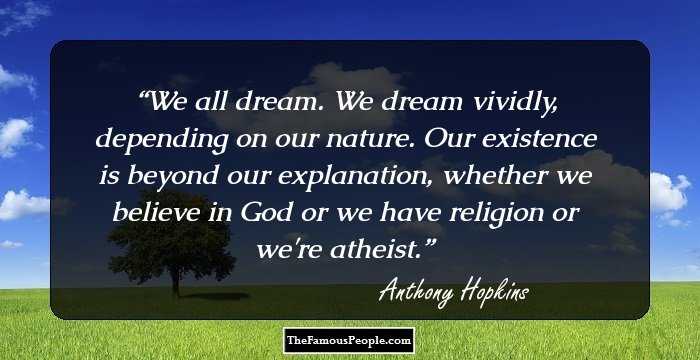 Anthony Hopkins was first married to Petronella Barker from 1966 to 1972. The couple has a daughter, Abigail.

Continue Reading Below
His second marriage was to Jennifer Lynton in 1973. The marriage lasted for almost 30 years before breaking up in 2002.
He is currently married to his third wife Stella Arroyave whom he wed in 2003.
He is involved with various charities and is a member of Greenpeace environmental protection group.

He was knighted by Queen Elizabeth II in 1993, for his contribution to the arts.

Trivia
He had a little more than 16 minutes of screen time in the movie for which he won the Academy Award for Best Actor in a Leading Role.
He is a recovered alcoholic.
It is a little known fact that this versatile actor is also a musician and composer.
He has a wax replica in Madame Tussaud’s Wax Museum in Amsterdam.

Quotes By Anthony Hopkins | Quote Of The Day | Top 100 Quotes

See the events in life of Anthony Hopkins in Chronological Order