(One of the Greatest Authors of All Time)

A celebrated writer, a recognized moralist and a distinguished social reformer – Leo Tolstoy needs no introduction of sorts. He is regarded as the greatest Russian literary giant, who gave the world some of the most remarkable piece of writings. A master of realistic fiction, Tolstoy’s novels are even today considered amongst the finest literary works. Through his works, Tolstoy not just became one of the greatest writers ever known, but a living symbol of someone in search of life’s meaning. What is interesting to note is that Tolstoy’s panache for writing enabled him to bring out masterpieces from everyday activities of people. He possessed a gift for describing his characters and their purpose with élan. Most of Tolstoy’s stories are built around his fond and lasting memories of childhood. While Tolstoy had an emotionally toiling early life, much of his later life was built around moralistic and ascetic views. He experienced a spiritual awakening in the last three decades of his life, post which he became a moral thinker and social reformer. It was his doctrine of non-resistance to evil which inspired Mahatma Gandhi and influenced the latter into walking on the path of non-cooperation and non-violence. Not just Gandhi, Tolstoy had a great influence on Martin Luther King Jr as well. His works, ‘War and Peace’, ‘Anna Karenina’ and ‘The Death of Ivan Ilyich’, still rank among the world's top literary pieces. Alexander Pushkin
DID WE MISS SOMEONE?
CLICK HERE AND TELL US
WE'LL MAKE SURE
THEY'RE HERE A.S.A.P
Quick Facts

Russian Celebrities
Playwrights
Short Story Writers
Russian Men
Virgo Writers
Childhood & Early Life
Leo Tolstoy was born to Count Nikolay Tolstoy and Princess Volkonskaya in Yasnaya Polyana, in the Tula Province of Russia. Youngest son of the family, Tolstoy experienced a lot of personal grief and sorrow at an early age.
His mother passed away when he was just two. At the age of nine, he lost his father. All his siblings including him were under the care of an aunt, who too passed away, leaving the care of children to another aunt.
Young Tolstoy attained most of his primary education at home with the help of German and French tutors. In 1843, he enrolled at the University of Kazan for an Oriental language program. However, his poor academic performance forced him to transfer to an easier law program. The transfer did not help him much as he left the University of Kazan in 1847 without a degree.
After his failed attempt at attaining education, Tolstoy tried his hand at farming. Aiming to be the perfect farmer, this attempt too did not bring any favourable result. However, Tolstoy started writing a journal, a custom which became a lifelong habit. 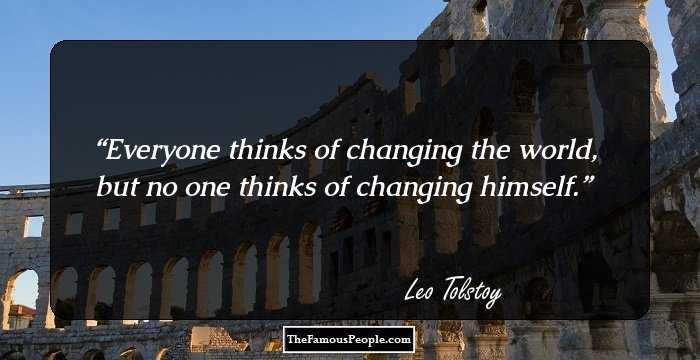 Continue Reading Below
Tryst with Writing
Tolstoy then joined the army as a junker, south of the Caucasus Mountains, at the suggestion of his brother Nikolay who was in the army too. It was during his years as a junker that Tolstoy unfolded a new dimension in his life as a writer.
His first written work was an autobiographical story in which he penned his fond childhood memories. Titled ‘Childhood’, he submitted the work to ‘The Contemporary’, which was the most popular journal of the time. The story was readily accepted and published. Little did Tolstoy know then that this was just a beginning of a prolific career!
After the success of ‘Childhood’, Tolstoy was inspired to start off with his next work, ‘The Cossacks’, which gave an insight into the day-to-day life at the Army outpost in the Caucasus. Meanwhile, Tolstoy was transferred to Sevastopol in Ukraine, where he fought the Crimean War.
While at war, Tolstoy kept his new-found fantasy alive and managed to pen another book, which was a sequel to his autobiographical ‘Childhood’. The book was titled, ‘Boyhood’ and was published in 1854.
Tolstoy gave a vivid account of the war and its striking contradictions through his three part novel, ‘Sevastopol Tales’, which he released in the middle of the Crimean War. It was in this book that Tolstoy experimented with his writing technique. Tolstoy left the army in 1855.
Post war, Tolstoy returned to his homeland in Russia. Though he was much in demand at the St. Petersburg literary scene, he refused to join any particular intellectual school of thought.
Tolstoy moved to Paris in 1857. However, his revolutionary behaviour and gambling streak did not assist him much, as he lost all his money and was forced to return to Russia. Same year, he came up with his third book of the autobiographical trilogy, ‘Youth’.
Tolstoy’s trip to Paris shaped much of his political and literary transformation. While the political transformation was due to his witnessing a public execution in the aftermath of which he promised never to serve a government anywhere, his literary conversion was when he met Victor Hugo and read the latter’s then newly finished work, ‘Les Miserables’.
In 1862, Tolstoy completed his work ‘The Cossacks’, which he had started while he was at the army. Same time, he even produced the first of a 12 issue-instalment of the journal ‘Yasnaya Polyana’.
Continue Reading Below 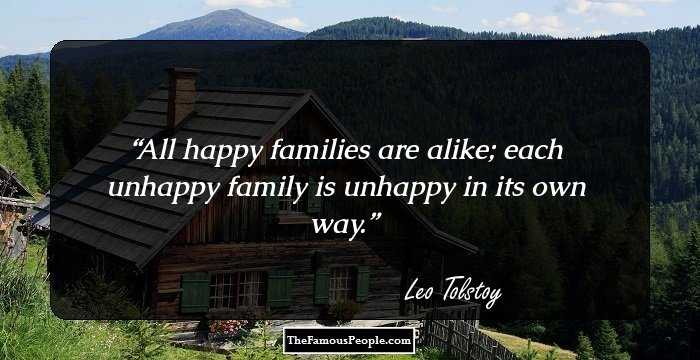 Quotes: Family
Rise to Stardom
Much of the early years of the 1860s were spent working on the masterpiece-to-be by Tolstoy. Much before the release of the novel, Tolstoy published a portion of the novel, under the title ‘The Year 1805’ in 1865. In 1868, he released three more chapters of the novel.
It was in 1869 that Tolstoy’s novel ‘War and Peace’ was released, which catapulted him to great success. It was his big ticket to stardom and success. The book gave a historical account of the Napoleonic Wars, combined with its thoughtful development of realistic yet fictional characters. It also highlighted the fact that much of the quality and meaning of one’s life is derived from his day-to-day activities.
The anticipation and expectations from the book were so high that following the release, the first edition of the book was sold out immediately. The book was widely recognized and received a grand reception. It was translated into many other languages post its publication.
Following the success of ‘War and Peace’, Tolstoy began to work on his next novel, titled ‘Anna Karenina’. The book, much like other books of Tolstoy, had mix of both fictional and non-fictional elements. It was based on the then state of Russia’s war with Turkey and included some fictionalized biographical events from Tolstoy's life.
The release of ‘Anna Karenina’ occurred in a frame of time, from 1873 to 1877, in the Russian Messenger. It was widely accepted and recognized both by the general public and critics. ‘Anna Karenina’ not only further established Tolstoy’s reputation as a literary genius; it firmed his financial position as well.
Tolstoy�
Despite the success of Anna Karenina, Tolstoy faced a spiritual crisis which made him depressed and gloomy to the extent of being suicidal. His outlook of life and what he thought morally upright to do was juxtaposed, which led him to be over-critical of himself.
It was during these trying times that Tolstoy rushed to Russian Orthodox Church to resolve his issues but was not satisfied from the same. Instead, he formed a negative view of the Christian churches which he found to be corrupt. To express his belief, he came up with a new publication, The Mediator.
From 1879 until 1880, Tolstoy released his next work, ‘A Confessions’. The book was an autobiographical which explained Tolstoy’s struggle with mid-life existential crisis of melancholia, philosophy and religion.
Continue Reading Below
Following this, in 1880s and 1890s, Tolstoy came up with numerous works, including some fictional and some non-fictional. Some of these were ‘The Census in Moscow’, ‘A Criticism of Dogmatic Theology’, ‘A Short Exposition of the Gospels’, ‘What I Believe’ and ‘What Then Must We Do?’.
Amongst his later works, ‘The Death of Ivan Ilyich’, written in 1886, was one of his most successful novellas. The story gives an account of its protagonist who realizes that he spends most of his life on trivial matters but the realization strikes him when he is struggling with his impending death.
Post the success of ‘The Death of Ivan Ilych’, Tolstoy came up with few more works some of which are ‘The Power of Darkness’, ‘The Kreutzer Sonata’, ‘Father Sergius’, ‘Hadji Murad’, ‘The Young Czar’, ‘What Is Art?’, ‘The Forged Coupon’, ‘Diary of Alexander I’, and ‘The Law of Love and the Law of Violence’.
In the last phase of his life, Tolstoy established himself as a moral and religious leader. He had a large following of disciples who were devoted to him and his believes which they named as Tolstoyism.
Tolstoy, along with his daughter Aleksandra, spent much of his last days travelling. However, the pilgrimage trip was tiring for Tolstoy who could not continue further Astapovo, Russia. 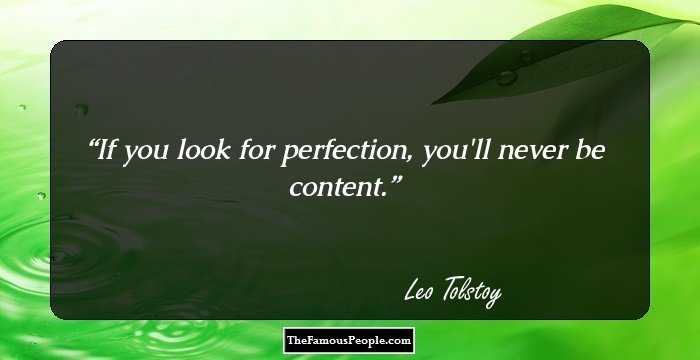 Quotes By Leo Tolstoy | Quote Of The Day | Top 100 Quotes

See the events in life of Leo Tolstoy in Chronological Order