Advanced Search
Owain Yeoman is a Welsh actor, best known for playing key roles in TV series, such as ‘The Mentalist’ and ‘Generation Kill’. The Monmouthshire born actor performed in many theatrical productions while in school. However, he did not want to pursue acting professionally, focusing on English literature instead. It was while he was working at a bank that he decided to become an actor, enrolling in the famous ‘Royal Academy of Dramatic Arts’ in London shortly after. Owain made his acting debut in the 2004 film ‘Troy’, wherein he played a small role. In the same year, he made his television debut in the series ‘Midsomer Murders’, appearing in a guest role. While his film career remained uneventful, he has been involved in some significant television projects over the years. After finding initial success in the series ‘Generation Kill’, he started appearing in a leading role in the highly successful show ‘The Mentalist’. Thereafter, he went on to make guest appearances on various popular TV shows before being cast in a main role in the historical drama series ‘Turn: Washington Spies’. Aneurin Barnard
DID WE MISS SOMEONE?
CLICK HERE AND TELL US
WE'LL MAKE SURE
THEY'RE HERE A.S.A.P
Quick Facts

Welsh People
The University of Oxford
Royal Academy Of Dramatic Art
Tall Celebrities
Tall Male Celebrities
Childhood & Early Life
Owain Yeoman was born as Owain Sebastian Yeoman on July 2, 1978 in Chepstow, Monmouthshire, Wales, United Kingdom. His father Michael Yeoman worked as a nuclear scientist, while his mother Hilary was a homemaker.
He grew up with a sister named Ailsa. His family had no connection with the entertainment industry and even he gave no thought to the prospect to becoming an actor while growing up.
Owain loved English literature while he was studying at the Wyedean School, located in Gloucestershire. He was also involved in his school’s amateur theatrical productions. However, he still considered acting a far-fetched dream, preferring to focus on academics. He also played hockey during his school years.
In order to pursue his literary ambitions, Owain enrolled in the ‘Brasenose College’ of the ‘Oxford University’. He was also part of the university’s dramatic society and comedy club, Oxford Revue, while pursuing his masters degree in English literature.
Following his graduation, he wanted to do a PhD in English literature, but he was unable to secure a grant for that. In order to earn a living, he started working at a bank in London. Around this time, his deep-seated desire to act intensified, and he enrolled in the ‘Royal Academy of Dramatic Art’ in London to study acting professionally.
Recommended Lists:

Cancer Actors
Welsh Actors
Actors Who Are In Their 40s
Welsh Film & Theater Personalities
Continue Reading Below
Career
Owain Yeoman successfully auditioned for a small role in the Brad Pitt-starrer film ‘Troy’ (2004). He played a character named Lysander in the period drama. Around this time, he came to know that America is where the most opportunities are. Therefore, he moved to Los Angeles to try his luck in Hollywood.
In the mid-2000s, he gave an audition for the film ‘Fantastic Four’, but failed to get the part. Later in 2004, he made his television debut with a small role in the series ‘Midsomer Murders’, in which he played Henry Charlton for one episode.
In 2004, he starred as Miles Ross in an upcoming television series called ‘Commando Nanny’, which did not see the light of the day.
The year 2005 turned out to be somewhat lucky for Owain, as he was signed to play the supporting character of Steven Daedalus on the sitcom ‘Kitchen Confidential’. The series ran for only one seasons, and the British actor appeared in 13 of its episodes.
In 2006, he appeared in 13 episodes of a drama series titled ‘The Nine’, wherein he played the role of Lucas Dalton, a bank robber. While his television career was moving at a stable pace, he was yet to get any significant film roles.
Owain played a very small role in the 2006 film ‘Beerfest’, and followed it up with a small part in a video documentary film titled ‘A Recipe For Comedy’.
In 2007, he played a supporting character called Ken in the television film ‘Traveling in Packs’. He followed it up with a guest role in the series ‘Terminator: The Sarah Connor Chronicles’.
He was signed to play the challenging and acclaimed role of Sergeant Eric Kocher in the HBO mini-series ‘Generation Kill’ (2008). It was a critically and commercially acclaimed mini-series that had Owain appearing in all of its seven episodes.
His television breakthrough came in 2008, when he was roped in to play one of the leading characters, Agent Wayne Rigsby, in the crime drama series ‘The Mentalist’. He appeared as a main cast member for the first six seasons, but left the show after that. He appeared as a guest in the seventh season.
Owain’s performance in ‘The Mentalist’ made him a household name, and he was invited as a guest on many talk shows and award functions.
In 2011, he took a major career turn and appeared in a slasher horror film titled ‘ChromeSkull: Laid to Rest 2’. His role as detective King was praised and the film was also highly acclaimed. Many critics called it one of the best slasher films ever made.
Owain went on to star in the film ‘American Sniper’ in 2014 and a short film titled ‘AbsolutSin’ in 2012. In the early 2010s, he also played many guest roles in television series, such as ‘Hell’s Kitchen’, ‘Supergirl’ and ‘Extant’.
In 2015, he started appearing in the supporting role of General Benedict Arnold in the period drama series ‘Turn: Washington Spies’. He worked in 29 episodes of the show from season 2 to 4.
In 2016, he was seen playing the supporting role of Terry Winters in the film ‘The Belko Experiment’. The horror-thriller movie proved to be a commercial and critical success. It also made waves at many local and international film festivals.
In recent years, he has appeared in guest roles in series, such as ‘Elementary’ (2016) and ‘The Blacklist’ (2017).
His upcoming big screen projects are the horror movie ‘The Boy 2’ and the thriller film ‘SAS: Red Notice’, which are slated for release in 2019 and 2020, respectively.
Recommended Lists:

Cancer Men
Family & Personal Life
Owain Yeoman got married to English actress Lucy Davis in December 2006. The couple got divorced in 2011.
He married famous jewelry designer Gigi Yallouz in 2013, and they have been together ever since. They also have a daughter.
He is a voracious reader who likes to be in the company of books whenever he finds time.
Owain originally intended to pursue accounting from the ‘Harvard University’, but changed his mind later and enrolled in the ‘Royal Academy of Dramatic Arts’.
He is a vegetarian and regularly campaigns against animal cruelty. He also supports PETA and was photographed for its vegetarianism campaign. 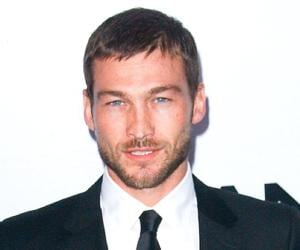