(One of the Greatest Football Managers of All Time)

Alex Ferguson is a former football player who served as the manager of the Manchester United Football Club for over 26 years. Regarded as the most successful manager in the history of the game, he is also the one who served for the longest period. He began his career as a player with Queen’s Park but could not secure a regular place. He moved on to play for St. Johnstone and then later on to Dunfermline. Such was his love for the game that he could not keep away from the football field even after his playing career was over. He entered a new phase in his career accepting a managerial position with the East Stirlingshire. He acquired the reputation of a strict manager who expected nothing but the best out of his players. Over the years he went on to serve as the manager for St.Mirren and Aberdeen, and brought about an almost miraculous transformation in the performance of the players. An excellent manager with a glowing reputation, he was signed by Manchester United to reverse the team’s dismal performances. He held the position for many years helping the team win prestigious titles and in the process became Manchester United’s most successful manager ever. Scottish People
Sports Administrators
Scottish Men
Scottish Coaches
Male Sportspersons
Childhood & Early Life
Alex Ferguson was born to Alexander Ferguson Sr. and his wife Elizabeth. He was brought up in a working class neighborhood.
He went to Broomloan Road Primary School and Govan High School. He was an intelligent boy but had little interest in studies, and was more inclined towards playing football.
His father was an amateur football player, and the young Alex spent his time kicking around a football with his father, brother and the neighborhood boys 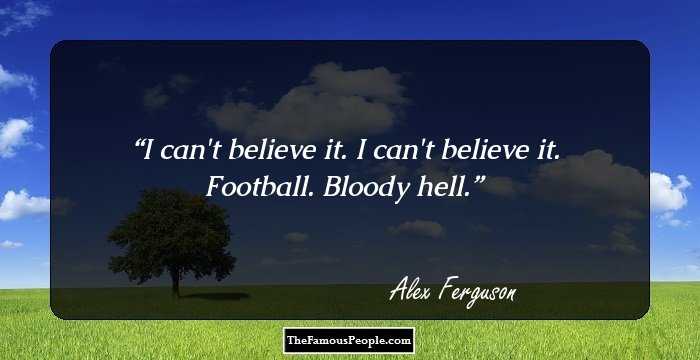 Quotes: Believe, I
Continue Reading Below
Career
He made his debut as an amateur with Queen’s Park in 1957. He played 31 games for the team and scored 20 goals, yet he could not secure a regular place in the team.
In 1960 he moved to St. Johnstone where he scored 15 goals in 31 league matches.
He signed a contract with Dunfermline in 1964 and became a professional footballer. In the 1965-66 season, he led the Scottish League along with Celtic’s Joe McBride with 31 goals. In this season alone, he had scored 45 goals in 51 appearances.
His success with Dunfermline led to a record £65,000 contract with Glasgow Rangers in 1967. After playing with them for just two seasons, he left the team. Here, he had managed to score 25 goals in 41 league matches.
He joined Falkirk in 1969 where he was made the player-coach. After four seasons, he was removed from this role by the new manager which made him quit the team.
He played for Ayr United for sometime before ending his playing career.
He secured a part-time managerial position with East Stirlingshire in June 1974, but was lured away by rival team St. Mirren within months. He started working with St. Mirren in October 1974, and served there till 1978 when he was fired from the post.
He joined Aberdeen in June 1978 replacing their manager Billy McNeill. The performance of the team improved considerably after his joining, and he helped the team win the Scottish First Division in 1980. He worked with Aberdeen till 1986, winning the Cup Winner’s Cup, UEFA Super Cup, and several other league titles.
In 1986, he was offered the position of manager with Manchester United which he accepted and replaced their then-manager Ron Atikinson. It was a very popular outfit, but had not been doing well lately.
Continue Reading Below
He was a strict disciplinarian and added new players like Steve Bruce, Brian McClair, Neil Webb and Paul Ince to the team. Despite all his efforts, the team could not win any major title till 1989.
The first big success came when the team won the FA cup beating Crystal Palace in the 1989-90 season. The team, having found their winning ways, won the UEFA Cup Winners’ Cup and Super Cup in 1991.
Over the decade, Ferguson led his team to various other title wins: Premier Leagues, FA Cup double, and UEFA Champions League.
In the 1998-99 season, the team won the ‘treble’: the FA Cup, the league, and UEFA Champions League. By this time, Manchester United had become the most famous and richest of all the football clubs in the world.
The team continued its winning streak under the able guidance of Ferguson, and was as successful as ever in the new millennium. They won their sixth Premier League and became the champions of England for the seventh time in nine years.
Ferguson was thinking of retiring by the end of the 2001-02 season, but decided to stay on by signing a new deal with United to manage the team for 11 more seasons.
In 2004, the team won the FA Cup which would be the final one under his management. The team beat Wigan Athletic 4-0 in the League Cup finals to lift the trophy in 2006.
By the time of his retirement, the team had managed to win the European Cup (2008), clinched three straight league titles in 2009, and also won the Premier League in 2013. 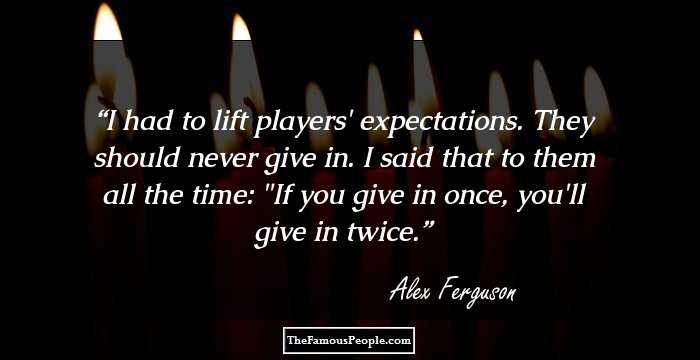 Quotes: You, Never, I
Continue Reading Below
Major Works
Ferguson was the longest serving and the most successful manager to have ever worked with Manchester United. In a career spanning over 26 years (1986-2013), he won 13 Premier League titles, 5 FA Cups, and 2 Champions League Trophies among several other victories.
Awards & Achievements
He has won The League Managers Association Manager of the Year Award four times. The award is presented to a manager from any division in English Football for his achievement in the prior season.
He has been named the Premier League Manager of the Season 11 times.
He was awarded British knighthood in 1999 for his contribution to the game of football.
The International Federation of Football History & Statistics (IFFHS) recognized him as the IFFHS World's Best Coach of the 21st Century in 2012. 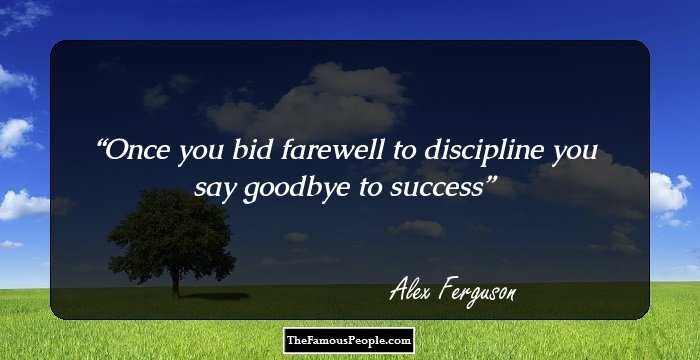 Quotes: You, Farewell
Personal Life & Legacy
He married Cathy Holding in 1966 and has three sons with her. His son Darren is a former football player and Scottish football manager.
Trivia
This famous football coach is an U.K Ambassador for UNICEF.
He earned the nickname ‘Furious Fergie’ because of his temperament.
His bronze statue, designed by sculptor Philip Jackson, is erected in Old Trafford.
Recommended Lists:
Sportspersons #90

See the events in life of Alex Ferguson in Chronological Order 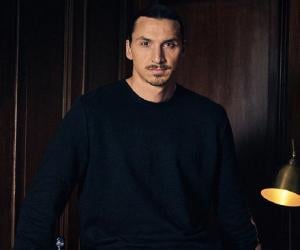