Angelo Bartlett Giamatti was a brilliant scholar and specialized in Comparative Literature. As a professor, he left a lasting impression on his students who loved and respected his views on Renaissance. He became the youngest president of Yale. During his presidency, he faced many problems. He had to put the University’s finances in order. He refused to allow Yale divest from companies that had ties with apartheid South Africa. Also, he had to contend with strikes by its clerical and technical workers. His writings on baseball caught the attention of league team owners and administrators. He was appointed the 12th president of the National League. A huge baseball fan from his childhood days, he tried to improve facilities in the ball park for fans. He was the unanimous choice for the post of Commissioner of Major League Baseball. He served only for a short period of six months. During this period, he was engrossed in the Pete Rose scandal. Pete Rose, then the Cincinnati Reds manager, was found guilty of betting on games. Determined to keep the game clean, Rose, a baseball icon, was forced to withdraw from the sport. This was similar to a lifetime ban and gave a strong and clear message to players. Shortly after this, Giamatti suffered a fatal heart attack.
Continue Reading Below 32
4th April In History
DID WE MISS SOMEONE?
CLICK HERE AND TELL US
WE'LL MAKE SURE
THEY'RE HERE A.S.A.P
Quick Facts

American Celebrities
Sports Administrators
American Men
Yale University
Male Sportspersons
Childhood & Early Life
Angelo Bartlett Giamatti was born to Mary Claybaugh Walton and Valentine John Giamatti at Boston, Massachusetts. His father headed the Department of Italian Language and Literature at the prestigious Mount Holyoke College.
Brought up in South Hadley, Massachusetts, he went to the South Hadley High School, and, for a year, to the Overseas School of Rome. He passed out of Phillips Academy in 1956.
He joined Yale University where he was associated with the secret society, Scroll and Key, and was a Delta Kappa Epsilon member. A brilliant student, he graduated in English with high honors, in 1960. 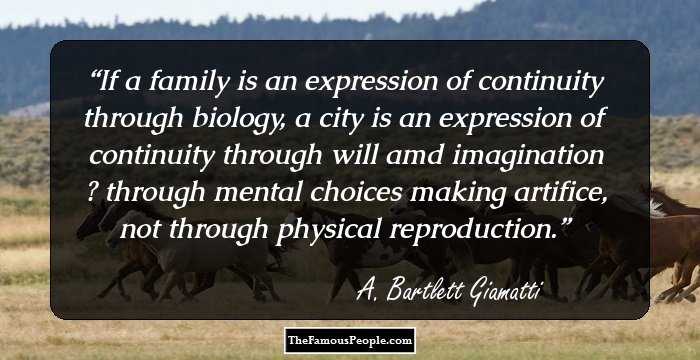 Quotes: Family, Will
Continue Reading Below
You May Like

Who Is The Most Popular BTS Member?
Career
Giamatti received his Doctorate in Comparative Literature from Yale in 1964. He co-edited Thomas Bergin’s essays which were then published. He began to teach Comparative Literature at Yale University’s Ezra Stiles College.
He was fascinated with the works of Edmund Spenser and English Renaissance literature. He focused on the mutual influence of English and Italian poets, and on the Italian poet, Ludovico Ariosto.
Very popular with his undergraduate students, he felt that Renaissance was an evolved product, and the process of evolution started during the Middle Ages. He used the term "Protestant Deformation” to make his point.
In 1972, his tenure as a teacher at Stiles College concluded. His students presented him with a moose head as their parting gift, because it was his wish that they give him a joke gift.
He became the youngest president of Yale University, serving from 1978 to 1986. During his presidency, Yale’s clerical and technical staff went on a strike. He was criticized for not handling the issue properly.
He refused to give in to the demands of protesting anti-apartheid students, who were demanding that Yale University withdraw its investments in companies that were doing business with apartheid South Africa.
He was an active member of the Board of Trustees of Mount Holyoke College, despite being busy with baseball-related matters. He was appointed Fellow of the American Academy of Arts and Sciences in 1980.
As an academician, he wrote many books, essays and articles on Renaissance literature, but baseball team owners and executives were attracted to him because of his writings on the game.
He was appointed the 12th president of the National League on December 11, 1986. He stressed on transparency and values, and sought to improve facilities for baseball fans in ballparks.
Continue Reading Below
He was the unanimous choice of 26 club owners for a five-year term as baseball's 7th Commissioner in 1988. As Commissioner, he appointed Francis T. Vincent, Jr. as the newly created deputy commissioner.
His book, ‘Take Time for Paradise’, was published in 1989. Some of his articles on baseball were compiled in the book, ‘A Great and Glorious Game’, and published posthumously.
Major Works
When Giamatti became the President of Yale University in 1978, he tried to regulate its finances that showed $10 million in cumulative deficits. After two years, Yale achieved a ''financial equilibrium.''
As a commissioner for baseball, in 1986, he showed zero-tolerance for dishonest acts, by forcing Cincinnati Red Manager Pete Rose to voluntarily accept a ban from the game for betting on games.
Awards
In 1969, Giamatti was awarded Guggenheim Fellowship for Humanities for English Literature. The Fellowships are awarded to individuals who have demonstrated exceptional scholarship or creative ability in the arts.
Personal Life & Legacy
In 1960, Giammati married Toni Marilyn Smith, an English teacher at the Hopkins School, New Haven. The couple had three children – sons Paul and Marcus are actors, while daughter Elena is a jewelry designer.
He died of a sudden heart attack at the age of 51. The new research center at the Hall of Fame was named the Giamatti Research Center.
Trivia
This famous American academician and baseball administrator was warned just a day before his death by his doctor that his clubbed fingers were indicative of early stages of cardiac arrest.
This scholar and baseball administrator declared, “For me, baseball is the most nourishing game outside of literature. They both are re-tellings of human experience”.
You May Like

See the events in life of A. Bartlett Giamatti in Chronological Order