Sinclair Lewis was an American novelist and a short story writer. He was the first American writer to win the Nobel Prize in Literature. Although many literary critics have dismissed him as a novelist and criticized the Swedish Academy for their choice there is no doubt that few writers of his era had such a profound effect on American culture as he had. Awkward and shy from his childhood he could never make friends and as a result he spent a lot of time observing and writing diary. Later, he developed a passion for writing and was ready to do all kinds of jobs to finance his writing career. Apart from working as a journalist and then as an editor he also wrote potboilers and sold plots to established writers to stay afloat. Ultimately, he had his first taste of success with his sixth published novel ‘Main Street’. Subsequently, he penned many other best sellers; but at the same time became addicted to alcohol. Ultimately, he died in Rome from advanced alcoholism at the age of 65. American Celebrities
Nobel Laureates In Literature
Novelists
Short Story Writers
American Men
Childhood & Early Life
Sinclair Lewis was born on February 7, 1885, in Sauk Centre, then a small village in the Steams County, Minnesota, to Dr. Edwin J. Lewis and Emma Kermott Lewis. The couple had three sons, out of which Sinclair was the youngest.
From the beginning, Sinclair was a sensitive child. His father, who was a strict disciplinarian, did not really understand him. His mother died when he was around six years old. Consequently, he grew up alone without parental company. However, when his father married a second time, he began to enjoy his stepmother’s attention.
Tall and ungainly, he did not have many friends at school and so he spent a lot of time reading. He also kept a diary. Nonetheless, he had a romantic mind and at the age of thirteen tried to run away from home with the aim of joining Spanish-American War as a drummer boy.
He began writing when he was in high school. Few of his articles were published in Sauk Center newspapers. After graduating from school in 1902, he enrolled at Oberlin College for one year and finally joined Yale University in 1903.
His study at the Yale University was interrupted as he took time off to work at Helicon Home Colony in New Jersey. During this period, he also took a trip to Panama to find work at Panama Canal that was being built under US supervision.
Ultimately, he came back to Yale and graduated from there in 1908. During his tenure at Yale, he contributed to Yale Literary Magazine on regular basis. Later, however, he trashed these works as “reeking with banal romanticism”. He was also the editor of the magazine for some time. 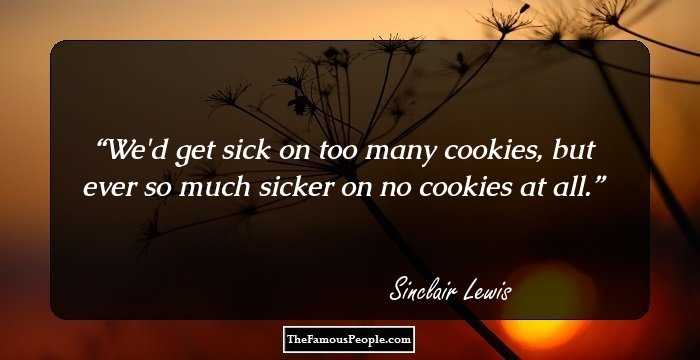 The Sexiest Men Of 2020, Ranked
Career
After passing out from Yale, Sinclair Lewis began to work as a journalist for different publications, moving from place to place, changing jobs. At the same time, he mastered the art of writing shallow, but popular stories, many of which were bought by a wide variety of magazines. To earn additional revenues, he also sold plots to writer Jack London.
In 1912, Lewis published his first pot boiler novel, ‘Hike and the Aeroplane’ under the pseudonym of Tom Graham. His first serious work, which was published in 1914 in his own name, was ‘Our Mr. Wrenn: The Romantic Adventure of a Gentleman’. It sold 9000 copies. Reviewers found the storyline refreshing.
Between 1914 and 1919, he wrote four more novels. They were ‘The Trail of the Hawk: A Comedy of the Seriousness of Life’ (1915), ‘The Job’ (1917), 'The Innocents: A Story for Lovers' (1917) and ‘Free Air’ (1919). However, none of these novels was commercially successful.
Lewis had his first taste of success with ‘Main Street’ published in 1920. It was followed by a string of successful novels, such as ‘Babbit’ (1922), ‘Arrowsmith’ (1925), ‘Elmar Gantry’ (1927) and ‘Dodsworth’ (1929).
He also wrote ‘Mantrap’ (1926) and ‘The Man Who Knew Coolidge’ (1928) during this period; but they were not that successful. Other than the novels, Lewis also wrote many short stories for different magazines. ‘The Little Bear Bongo’ (1930) bought by Walt Disney Pictures is one of them.
In the course of 1930s and 1940s, Sinclair Lewis wrote 11 more novels, out of which 10 were published while he was still alive. Other than that, he also wrote many short stories, plays and screenplays. Many of his works were later adapted for feature films.
Unfortunately some time in 1930s, Sinclair Lewis became a victim of alcoholism. In 1937, he checked into Austen Riggs Center at Massachusetts, but checked out within 10 days as the doctors there gave him ultimatum that if he wanted to live he would have to forgo drinks.
In 1940s, Lewis traveled across the United States with writer Lewis Browne. During these tours they debated on many contemporary topics such as ‘The Country Versus the City’, ‘Has the Modern Woman Made Good?’, ‘Is the Machine Age Wrecking Civilization?’ and ‘Can Fascism Happen Here?’ in front of huge audiences.
Later, he travelled to Europe searching for new publishers. By then, established writers like Fitzgerald, Hemingway, Dos Passos, and Faulkner had started dominating the market. Nonetheless, he kept on writing. His last novel ‘World So Wide’ was published posthumously.
Continue Reading Below 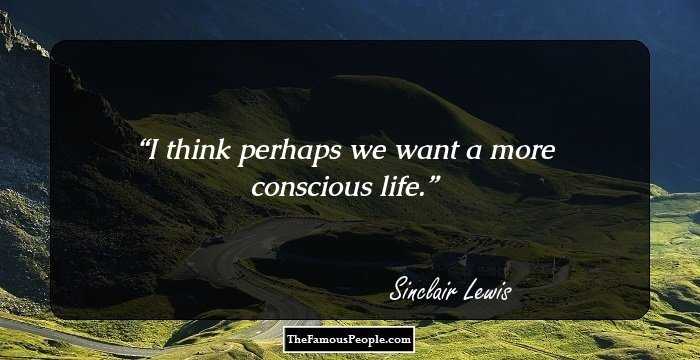 Quotes: Life, Think, I
Major Works
‘Main Street’ published on October 23, 1920 was his first successful novel. It was a labor of love. He had started taking notes sometime in 1916 and finished writing the novel in 1920. It sold 180,000 copies in first six months only. Within a few years, the sales reached two millions.
’Babbitt’, published in 1922, is another of his best sellers. It is a satire of American life and culture and depicts midsize American cities. It was adapted for a film by Warner brothers twice; first time as a silent movie and then in 1934 as a talkie.
’It Can’t Happen Here’ (1935) is another of his major works. It is a political novel written during the rise of fascism in Europe and depicts an American politician who takes complete control of the government after he is elected as the President. It was later adapted both for the stage and film.
Awards & Achievements
Lewis 1925 novel ‘Arrowsmith’ was awarded Pulitzer Prize, but for some reason Lewis declined to accept it.
In 1930, Sinclair Lewis was awarded Nobel Prize in Literature. He was the first American writer to win the coveted prize. While presenting the award, special mention was made to his 1922 novel ‘Babitt’. 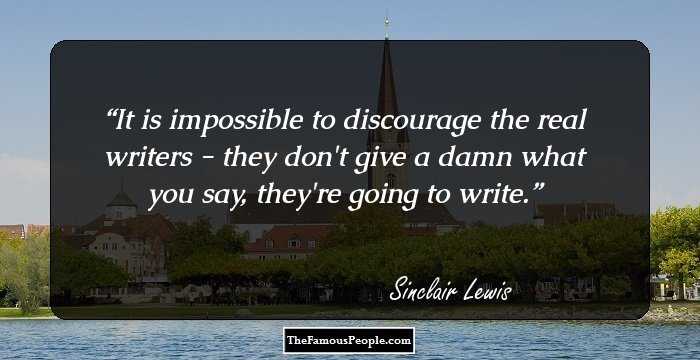 Quotes: You
Personal Life & Legacy
Sinclair Lewis married Grace Livingston Hegger, editor at Vogue magazine, in 1914. They had one son, Wells Lewis, who later joined the US Army and was killed in action during the Second World War. The couple spilt up in 1925.
Three years later, on May 14, 1928, Lewis married Dorothy Thompson, a political newspaper columnist. This marriage too ended in a divorce in 1942. Their son Michael Lewis was an actor, who fathered three children; John Paul, Gregory Claude and Lesley.
On January 10, 1951, Sinclair Lewis died from advanced alcoholism in a small clinic outside Rome. At that time, he was touring Europe. His body was cremated and the remains were brought back to the US to be buried in Sauk Center.
You May Like

Quotes By Sinclair Lewis | Quote Of The Day | Top 100 Quotes

See the events in life of Sinclair Lewis in Chronological Order