Travis Pastrana is one of the most accomplished racers that America has ever produced. At an early age he developed an interest for racing and his parents could gauge the inherent talent in their son, and supported him in enhancing his skills. He got his first motorbike when he was only four, and even at that tender age, he performed stunts which would astonish people. This sport demands great physical as well as mental strength, and Travis lacked neither. He met with several accidents and was wounded and injured innumerable times, but this daring racer never gave up his endeavours. The proverb ‘Failure is the pillar of success’ seems to perfectly suit Pastrana because whenever he failed in any attempt, he made it a point to practice even more and ensured his success. It can be said that speed and stunts together make him stand out in the world of sports. He has earned immense popularity with his stunts which apparently are breathtaking. Travis has amassed a huge number of fans who follow him on social networking sites to keep themselves updated about his life, endeavours and achievements. The talented rally racer has won many hearts along with racing events, and has a long way to go
Continue Reading Below

American People
Film & Theater Personalities
American Men
Tall Celebrities
Tall Male Celebrities
Childhood & Early Life:
The only child of Robert and Debby Pastrana, Travis Pastrana was born on 8th October, 1983 in Annapolis, Maryland.
He was interested in racing from his early childhood and rode BMX bikes performing stunts. At the age of four, he got his first motorcycle and participated in racing events. He even registered many wins ever since he took to racing.
He was a brilliant student as well and earned good grades in school and pursued his higher studies from the ‘University of Maryland’. 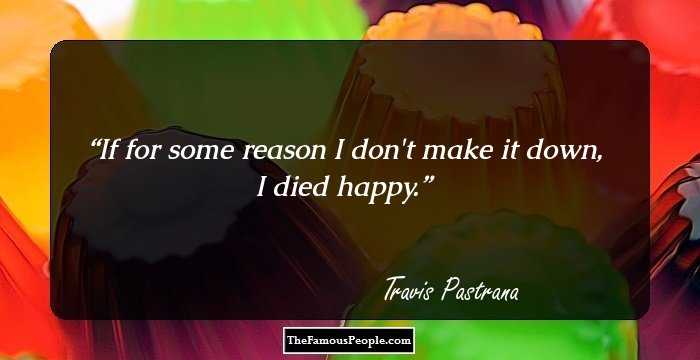 Famous Beautiful Women With Green Eyes
Career:
He won the ‘World Freestyle Championship’ in the year 1998, when he was only fourteen years old.
In 1999, he participated in the ‘X Games MotoX Freestyle’ event and won a gold medal by scoring 99.00 points, which was the highest score.
He won the ‘AMA 125cc National Championship’ in 2000. In this race he tried a backflip stunt which injured his foot. The same year he won ‘AMA Rookie of the Year’.
He won the ‘125cc East Coast Supercross Championship’ in the year 2001, which was his third gold medal at the ‘X Games’. The same year, he won the ‘Gravity Games Freestyle’ competition. The following year too he won the ‘Gravity Games Freestyle’ and ‘Gravity Games Freestyle Challenge’.
In 2003, he began his rallying career where he represented the ‘Subaru Rally Team USA’ in the ‘X Games’ and won his fourth gold medal at the event. The following year, his performance was marred by injuries and he managed to win a silver medal. He also won a bronze medal in ‘Best Trick’ contest.
In 2005, he won a gold medal at the ‘X Games MotoX Freestyle’, and the following year too, he won this event.
He won three gold medal at the ‘X Games’ event in the year 2006, in ‘MotoX Freestyle’, ‘MotoX Best Trick’ and ‘Rally Car Racing’. He even made a successful attempt at Double Backflip in the event and scored the highest points in ‘Best Trick’ competition. The same year, he also won the ‘Red Bull X Fighters’.
He won the ‘Red Bull X Fighters’ in 2007 as well and also won the ‘American Rally Champion’. He defended his title at the ‘American Rally Champion’ successfully for the next two years.
In 2008, ‘Asociación de Motociclismo de Puerto Rico’ (Motorcycling Association of Puerto Rico) allowed him to race for the Puerto Rico team. He participated as a member of the team and ranked third in the contest.
Continue Reading Below
In 2009, after making two unsuccessful tries at the ‘Rodeo 720’ trick, he finally made a successful landing on 8th November, but he landed at a little less than 720 degrees and Travis named it ‘TP7’. This stunt was captured and featured in his adventure film ‘Nitro Circus Country Fried’, which became the seventh part of the action sport collective ‘Nitro Circus’.
He won the ‘MotoX Freestyle’ as well as the ‘Moto X Speed & Style’ competitions in the year 2010. That year, he made a world record for fastest ascent of Mount Washington in his car ‘Subaru WRX STi’. However, defects in his rally car hindered his win at the ‘Rally Car Racing’ and he even lost a chance to participate in the ‘Super Rally’.
In 2011 he competed at the ‘National Association for Stock Car Auto Racing’ (NASCAR) for the first time and drove at the ‘Toyota All-Star Showdown’ where he was ranked sixth.
He debuted at the ‘Global RallyCross Championship’ in 2011 and the following year he registered a win at this competition.
In 2012, he participated in the ‘24 Hours of Daytona’ as a member of the ‘AF Waltrip’ team along with racers Michael Waltrip, RuiÁguas, and Rob Kauffman.
Awards & Achievements
This skilled racer has registered many victories in his till date. He won his first gold medal at the ‘X Games’ in the year 1999, and since then he has earned ten gold medals at the event in total till date.
The iconic rally racer has also been four times champion at the ‘American Rally’ event.
Personal Life & Legacy
The video game ‘Kelly Slater's Pro Surfer’, launched in 2002, includes a character based on this famous rally racer.
Pastrana has worked as a voice-over artist in the video game ‘Colin McRae: DiRT’ released in 2007. The video games ‘Colin McRae: DiRT 2’ and ‘MTX Mototrax’ include characters replicating Pastrana.
He authored the book ‘The Big Jump: The Tao of Travis Pastrana’ along with the senior writer of ‘ESPN The Magazine’ Alyssa Roenigk, published in 2007 by ‘ESPN Books’.
In 2008, ESPN made a documentary on this famous sports personality which was entitled ‘199 Lives: The Travis Pastrana Story’.
On 29th October, 2011, Travis married Lyn-Z Adams Hawkins, who is a professional skateboarder. The couple is blessed with two daughters named Addy Ruth and Bristol.
This talented motorist also co-owns a garment company named ‘Ethika’.
Net Worth:
According to Celebrity Net Worth this sports personality has a net worth of $30 million.
Trivia:
The American football quarterback Alan Pastrana is Travis’ uncle.
Recommended Lists:
Film & Theater Personalities #5257
You May Like

See the events in life of Travis Pastrana in Chronological Order