Gilles Marini
Actors #3511
Directors #787
Screenwriters #542
DID WE MISS SOMEONE?
CLICK HERE AND TELL US
WE'LL MAKE SURE
THEY'RE HERE A.S.A.P
Quick Facts

French People
Screenwriters
French Men
Cancer Actors
French Actors
Childhood & Early Life
Samuel Benchetrit was born on June 26, 1973, in Champigny-sur-Marne, Paris, France, to Michèle and Charles Benchetrit. He grew up in a Parisian suburb where his family lived in a low-rent apartment building.
Benchetrit started writing at a young age. After completing his education, he decided to make a career out of writing. At the age of 27, he released his first book ‘Récit d'un branleur’ which received positive reviews. Subsequently, he decided to shift his focus towards films.
Continue Reading Below
You May Like

The Sexiest Men Of 2020, Ranked
Career
Samuel Benchetrit made his directorial debut in 2000 when he directed a short film titled ‘News from the L Project.’ In the same year, ‘News from the L Project’ won the ‘Audience Award’ for ‘Best Short Film’ at the ‘Amiens International Film Festival.’
‘News from the L Project’ was screened in the USA on May 5, 2001, at the ‘Williamsburg Brooklyn Film Festival’ where it was adjudged ‘Best Short Subject.’ It then went on to win the ‘Prix UIP Valladolid’ award at the ‘Valladolid International Film Festival’ in 2001. The following year, it was nominated for ‘European Short Film’ award at the ‘European Film Awards.’
In 2003, he directed his first feature film ‘Janis And John’ which starred François Cluzet, Sergi López, and Marie Trintignant in important roles. In the same year, he appeared in a TV series documentary titled ‘As in cinema.’
Benchetrit made his acting debut in 2005 when he was cast to play Daniel in Emmanuelle Bercot-directed film ‘Backstage’ which premiered at the 62nd ‘Venice International Film Festival.’ In the same year, he released his second book ‘The Chronicles of Asphalt’ (Volume I).
Benchetrit’s popularity increased in 2007 when he directed ‘I Always Wanted to Be a Gangster’ which narrates the story of four aspiring criminals. The movie garnered critical acclaim and won many awards at various film festivals. In 2008, it won the ‘Audience Award’ and ‘Screenwriting Award’ at ‘Transilvania International Film Festival’ and ‘Sundance Film Festival,’ respectively. In 2009, the film earned Benchetrit a ‘Best Writer’ award at ‘Lumiere Awards.’
In 2009, he played Djibril in Hafid Aboulahyane-directed short film ‘The crab walk.’ He then played a minor role in one of the episodes of a television series titled ‘X Women.’ In the same year, he also released a book titled ‘The Heart Outside.’
In 2011, Benchetrit directed a comedy film titled ‘Chez Gino.’ Apart from writing and directing the film, he also portrayed a character named D. T. Stern. In the same year, he also played the lead role of Pierre Goldman in Christophe Blanc-directed crime-drama TV movie ‘Goldman.’ In 2012, he was cast to play Louis in Jacques Doillon-directed romantic-drama film ‘A Child of Yours.’
Benchetrit played the lead role in Raphaël Haroche-directed short film ‘Revox’ which released in 2013. The following year, he directed a feature film titled ‘A Journey’ which starred Anna Mouglalis, Yann Goven, and Céline Sallette in prominent roles. Also in 2014, he was cast to play Martin in Mona Achache-directed comedy film ‘Les Gazelles.’
In 2015, he directed a comedy-drama film titled ‘Macadam Stories,’ for which he also wrote the screenplay. In the same year, he also released a book titled ‘Dog’ which would later be adapted into a film.
In 2017, he directed the comedy-drama film ‘Dog’ which went on to win many awards. It won the ‘Golden Bayard’ award for ‘Best Film’ and ‘Best Cinematography’ at the 2017 ‘Festival International du Film Francophone de Namur.’ The film also received many nominations at various international film festivals.
Apart from directing and appearing in films, Benchetrit also makes cameo appearances in TV series and TV documentaries. In 2008, he appeared in three television series, namely ‘The Boat Book,’ ‘Highly next Sunday,’ and ‘Silenci?’ From 2008 to 2018, he appeared in seven episodes of a TV series titled ‘We are not lying.’
Family & Personal Life
Samuel Benchetrit is of Moroccan-Jewish origin. His father Charles Benchetrit is a metal worker in France. In one of his interviews, Samuel revealed that his parents served as inspiration while writing his play ‘Comedy on a Railway Platform.’
In 1998, he got married to actress Marie Trintignant. On April 17, 1998, Benchetrit and Trintignant were blessed with a son named Jules Benchetrit. Samuel Benchetrit was married to Trintignant until her death in 2003.
In 2005, he started dating actress Anna Mouglalis. On March 7, 2007, Mouglalis gave birth to their daughter Saul. Benchetrit and Mouglalis broke up in 2012 after living together for seven years.
In November 2016, he started dating musician and actress Vanessa Paradis who played Hélène in his comedy-drama movie ‘Dog.’ The two eventually fell in love with each other and got married in June 2018 in Saint-Simeon, France. Paradis had previously dated American actor Johnny Depp with whom she had two children, namely Lily-Rose Depp and John Christopher 'Jack' Depp III.
Over the years, Samuel Benchetrit has shown keen interest towards France’s political set-up. During the 2002 presidential campaign, he supported Lionel Jospin from the ‘Socialist Party.’ During the 2007 presidential campaign, he supported Ségolène Royal.
Recommended Lists:
Film & Theater Personalities #7725
You May Like

See the events in life of Samuel Benchetrit in Chronological Order 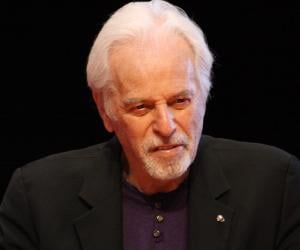