Samara Weaving is an Australian actress and model best known for working in films such as Three Billboards Outside Ebbing, Missouri and Ready or Not. Born in Adelaide, Samara moved around a lot in her childhood owing to her parents’ work. Her father was a filmmaker, which is how she initially became interested in working in the showbusiness. She joined drama school when she was a child and made her acting debut doing theatrical plays. She made her on-screen debut with the television series titled Out of the Blue and had her acting breakthrough appearing in the soap opera titled Home and Away. For her performance in the latter, she received an AACTA Award. After working in a few short films, she made her feature film debut in 2013 with Mystery Road, and since then she has appeared in many critically acclaimed films such as Guns Akimbo, Ready or Not and Three Billboards Outside Ebbing, Missouri. She has created a niche for herself in the comedy-horror genre and has repeatedly played key parts in such films. In addition to her acclaimed film roles, she has also been a part of series’ such as SMILF, Picnic at Hanging Rock and Hollywood etc. Maia Mitchell
DID WE MISS SOMEONE?
CLICK HERE AND TELL US
WE'LL MAKE SURE
THEY'RE HERE A.S.A.P
Quick Facts

Samara Weaving was born on February 23, 1992, in Adelaide, South Australia, to Simon Weaving and Helena Bezzina. Her father is a filmmaker while her mother is an art therapist. Her father is also a lecturer at the University of Newcastle, in Newcastle, New South Wales. Along with her father being into the film business, her uncle Hugo Weaving also happens to an acclaimed actor, which led Samara to gain an interest in films from an early age.

Her father was of English ancestry while her mother had roots in Malta. Samara grew up with a younger sister named Morgan Weaving.

Due to her father’s job, Samara moved around a lot during her childhood. She was also shy and introvert, which further made moving to new places constantly a terrifying experience for her. Her mother was an art therapist, and she helped her come out of her shell. In addition, she was also enrolled in a drama school when she was 5 years old, to further make her open up.

The transformation happened overnight. She played the Grinch in a stage-play after she joined the drama school, wherein her loud performance grabbed eyeballs.

She spent most of her childhood and early teen years moving around a lot in countries such as Fiji, Indonesia and Singapore. She eventually moved back with her family to Australia permanently. She approached her schooling from a grade school in Jakarta, Indonesia, and the Pittwater High School in Australia. She later graduated high school from the Canberra Girls’ Grammar School.

All through those formative years, she was active in dancing and acting on-stage. She had become a highly polished actress by the time she was 15 years old. She exhibited her desire to become an actress to her parents when she was 13. Her parents arranged a talent agent and thus, she began auditioning for roles in films and television.

In 2008, at the age of 16, she made her on-screen debut with the Australian drama serial titled Out of the Blue. The drama was commissioned by the BBC hence it was a decent debut for her. She played a supporting role as Kirsten Mulroney in the drama, which ran for 130 episodes.

After this satisfactory debut, she appeared in the Australian soap opera titled Home and Away. The show had been running for more than 20 years when Samara joined, playing one of the key roles as Indigo Walker. However, initially, she was signed to play a recurring role and appeared in the first few weeks.

After the writers decided to bring Indigo and her family’s character into the main plot, Samara reprised her role beginning from 2010 and remained an integral part of the show’s main cast until 2013. It was one of her first fully-fledged television appearances, and she managed to impress the critics and the audience alike with her portrayal. She received a nomination for an AACTA Award and shifted to Sydney for the show.

The soap opera was an international success, which led her to become a known face in the Australian industry. In July 2013, she announced that her stint with Home and Away was approaching an end.

As for her film career, she started with doing short films such as Sprung, Steps, Growing Young and He Who Has It All.

In 2013, she made her feature film debut appearing in the mystery drama film titled Mystery Road. She played a supporting role as Peggy Rogers in the film, which starred her uncle Hugo Weaving playing the lead role. The film turned out to be a major critical hit, winning several AACTA Awards and Asia Pacific Awards among many other awards and nominations.

In 2015, apart from making an appearance in the web-series titled Squirrel Boys, she also appeared playing a recurring role in the comedy-horror series titled Ash Vs Evil Dead. She played a recurring role as Heather in the first season of the series. The series earned good reviews and ratings for the first three seasons until it was cancelled after the third season.

In 2016, she appeared playing a supporting role as Brianne in the action comedy film titled Monster Trucks. However, the film turned out to be a major box office and critical disaster.

In 2017, she began the year with the American action comedy horror film titled Mayhem, wherein she played the first lead role of her career. She played Melanie Cross in the film, which received its premiere at the South by Southwest Film Festival. The film turned out to be a critical and commercial success.

The year 2017 turned out to be the golden year for her as her second film of the year was Three Billboards Outside Ebbing, Missouri. She played a supporting role as Penelope in the crime drama film, which was considered among the best films of the year. The film received huge acclaim and was nominated for seven Academy Awards, winning two.

Samara ended the year with the lead role in the teen comedy horror film titled The Babysitter. The film was released on Netflix and received great reviews. Samara’s work on the film received universal acclaim.

In 2017, she also appeared in the comedy series titled SMILF, playing one of the lead roles as Nelson Rose, which was a critical success. However, she terminated her contract with the show prematurely after the second season, after showing discontentment over a nude sex scene. She also alleged that the showrunner and her co-star Frankie Shaw was inappropriate during the filming of an earlier sex scene as well. However, investigations gave a clean chit to Shaw.

In the more recent years, her film career has been a great success. In 2019, she appeared in two films- Guns Akimbo and Ready Or Not. She played key roles in both the films and the films became critical successes, with Samara winning critical acclaim for her roles.

In addition to her film roles, she has modelled for the Australian underwear brand Bonds. She has also appeared in commercial advertisements and music videos.

Samara Weaving dated creative producer Jimmy Warden for a few years and the couple announced their engagement in March 2019. She has earlier dated Axle Whitehead and Rob Moore.

Her facial features are strikingly similar to a fellow Australian actress Margot Robbie and she is frequently confused with the latter.

Samara’s younger, Morgan Weaving, also happens to be an actor.

See the events in life of Samara Weaving in Chronological Order 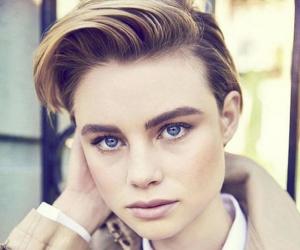