Lucy Fry is an Australian actress who made her debut in the show business with a small role in the Australian dramatic fantasy television programme ‘H2O: Just Add Water’. Before making it to television and films, Fry honed her acting skills in the theater, appearing in over ten shows between 2007 and 2010. She is well known for her role of ‘Zoey’ in the Australian television teen drama ‘Lightning Point’. Fry has appeared in television shows like ‘Mako: Island of Secrets’ and ‘11.22.63’; she played one of the lead characters in each of these shows. She recently appeared in the Australian horror web television series ‘Wolf Creek’. She made her film debut with a role the popular film ‘Vampire Academy’, where she portrayed the character of ‘Vasilisa "Lissa" Dragomir’. This role remains one of her most important ones till date. She appeared alongside Eddie Murphy in the film ‘Mr. Church,’ where she played the character of Poppy. Australian People
Pisces Actresses
Australian Actresses
Actresses Who Are In Their 30s
Women Film & Theater Personalities
Career
Lucy Fry began her acting career in the theaters, appearing in many productions in the late 2000s. Prior to this, she had studied acting and received training at ‘Zen Zen Zo’, a Brisbane-based physical theatre company. Fry appeared in various theater shows like ‘Mr. A's Amazing Maze Plays’, ‘A Midsummer Night's Dream’, ‘Invisible Journeys’, and ‘Beach’. In 2007, she took part in the model hunt for ‘Girlfriend’ magazine and eventually came second. This helped her gain entry into the show business. She made her acting debut on television with an appearance in the Australian dramatic fantasy television program for children and teenagers, ‘H2O: Just Add Water’, created by Jonathan M. Shiff.
She then bagged one of the lead roles (‘Zoey’) in ‘Lightning Point’, an Australian television teen drama, which also marked her second appearance under Jonathan M. Shiff. She was part of the show for 26 episodes in 2012. She appeared in a lead role in ‘Mako: Island of Secrets’, a television program for children and teenagers, in which she played the character of ‘Lyla’. It was her third show in a row under Jonathan M. Shiff’s production. In 2014, she made her film debut with the role of ‘Vasilisa "Lissa" Dragomir’ in ‘Vampire Academy’. The British-American fantasy comedy horror film was based on the best-selling novel ‘Vampire Academy’ by Richelle Mead and was scripted by Daniel Waters.
After making a couple of small appearances in 2015, she appeared in ‘Mr. Church’, an American comedy-drama film. Fry played the character of ‘Poppy’ and was seen acting alongside popular actor Eddie Murphy. In the same year, she played the character of ‘Marina Oswald’, one of the lead characters in the American science fiction thriller miniseries ‘11.22.63’. She appeared alongside James Franco, Sarah Gadon, Cherry Jones, and George MacKay in her eight-episode appearance. She was featured in the role of ‘Eve Thorogood’ in the Australian horror web television series ‘Wolf Creek’ in 2016. Her performance won her a nomination for the Fangoria Chainsaw Award for the Best TV Actress. A year later, she appeared alongside Will Smith, Noomi Rapace, and Édgar Ramírez in the Netflix urban fantasy crime film ‘Bright’.
You May Like 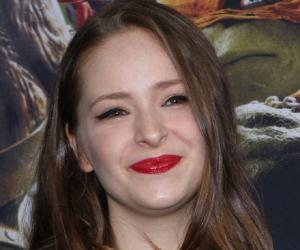