Tim Fenchem once said—“No one will ever duplicate Sam Snead. No one will ever surpass Sam Snead because he was so unique”; and so he was. Sam Snead is remembered as one of the titans of golf, who remained competitive in massive proportions, well into his last years, leaving behind a tremendous legacy at the time of his death. He won a record 82 PGA Tour events, including seven majors. Overall he had a total 165 Professional wins in his whole career. His tremendous contributions and achievements in the field of golf earned him numerous titles and accolades including the Vardon Trophy and the ‘PGA Tour Lifetime Achievement Award’. When Snead started out, he had never taken a single professional lesson or course in golf. He was an amateur who was destined for greatness and dominated the sport for nearly four decades during his tenure. His classic trademark style was his fluid, ‘powerful swing’ and his straw hat. He would also walk out on the field barefoot; making him one of the most passé yet poised players of the 20th century.

John Daly
Golfers #19
Sportspersons #838
DID WE MISS SOMEONE?
CLICK HERE AND TELL US
WE'LL MAKE SURE
THEY'RE HERE A.S.A.P
Quick Facts

American Celebrities
Male Golfers
American Golfers
Male Sportspersons
American Sportspersons
Childhood & Early Life
Sam Snead was born on May 27, 1912, in Ashwood, Virginia, Near Hot Springs.
As a young boy, he was raised on a farm near the small town of Ashwood and was expected to get into squirrel hunting, which was a tradition for all rural boys in Virginia. However, he was very drawn to sports and was an all-round athlete when he was in school, making it to the football and the track-team.
It is believed that this young boy played golf with a crooked stick and stones that he collected. His first real introduction to the game was when he was picked as a caddy at the age of 15 at a Hot Springs golf course, not far from his home.
He and his friends would walk barefoot to the course and caddy for professional players and earn a little money in the process. This eventually got him hooked to the sport.
He soon worked as an assistant pro at ‘The Homestead’ at the age of 19 and turned to professional golf in 1934. Two years later, he joined the PGA Tour and accomplished instant triumph. 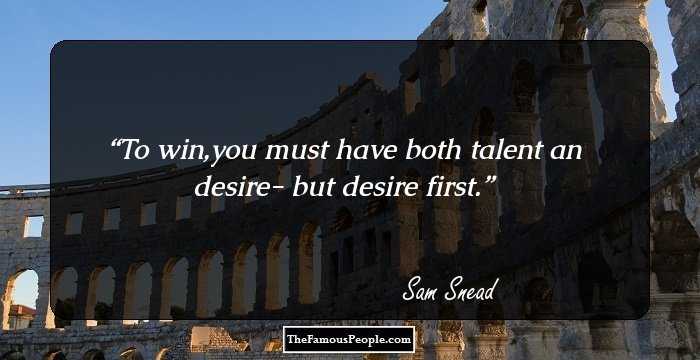 The Hottest Male Celebrities With The Best Abs
Career
In 1936, he won two golf bouts at the Meadow Brook Club, earning a $10,000 fee. This fee helped him financially and helped him play the sport full time.
1937 was his first full year on the Tour, where he won five events, including the Oakland Open at Claremont Country Club in California. The same year, he played in the US Pro Tennis Championship, losing to Karel Kozeluh. The next year, he won the Greater Greensboro Open.
In 1942, he was conscripted to the US Navy during World War II, where he served as an athletic specialist in San Diego. After a back injury, he was given a medical discharge from the army.
In 1944, he was made a head pro at ‘The Greenbrier Resort’ in White Sulphur Springs, in West Virginia. Six years later, he won 11 events, achieving third place overall after Byron Nelson and Ben Hogan.
In 1952, at the Jacksonville Open, he forfeited rather than playing against Doug Ford, after the duo’s match ended in a tie at the finish of the regulation play.
He played in a controversial match against Mason Rudolph at the Mid Ocean Club in Bermuda, in December 1959. He deliberately lost that match after he discovered he had too many golf clubs in his bag on the 12th hole. The match was tied at that stage. As per the Rules of Golf a player is limited to 14 clubs and hence Snead would have been immediately disqualified. He also captained a Ryder Cup team in 1959.
In 1962, he participated in and won the Royal Poinciana Plaza Invitational and became the only man to ever win an endorsed LPGA Tour Event. The same year, he wrote his autobiography, ‘The Education of a Golfer’.
In 1965, he participated in the Greater Greensboro Open and was the oldest player to win a PGA Tour event at the time.
He once again captained a Ryder Cup team in 1969. Two years later, he won the PGA Club Professional at Pinehurst Resort.
Continue Reading Below
He participated in a US Open, aged 61, in 1973. The next year, he was seen at the PGA Championship to finish tied for third, three hits behind winner, Lee Trevino.
He participated in the ‘Legends of Golf’ event and won the tournament, in 1978.
In 1980, he participated in the ‘Golf Digest Commemorative Pro-Am’, which was also a senior win for him. Two years later, he participated in and won the ‘Liberty Mutual Legends of Golf’, along with Don January.
In 1983, he was seen playing at ‘The Homestead’ in Hot Springs, Virginia, where he shot a round of 60.
He played at the Old White course of ‘The Greenbrier’ in White Sulphur Springs, West Virginia, in 1997, where he shot a round of 78. The next year, he was awarded for his contributions to golf.
Till 2002, he hit the symbolic ‘starting tee shot’ at the significant, ‘The Masters’. In his final years, he wrote a number of instructional guides and columns for golf magazines.
Awards & Achievements
From 1939 to 1955, he won the Vardon Trophy four times.
In 1949, he was presented the ‘PGA Player of the Year’ Award.
He was the only player to post a top-10 finish in at least one major championship in five different decades.
Continue Reading Below
He was inducted into the ‘World Golf Hall of Fame’, in 1974.
He is the holder of the title of ‘Most PGA Tour Victories’ (82).
In 1998, he was honored with the ‘PGA Tour Lifetime Achievement Award’.
Personal Life & Legacy
Sam Snead was best known for playing his tournaments barefoot and also wore his signature straw hat while playing.
He married Audrey in 1940 and had two sons; Sam Jr. and Terry. The couple remained together till Audrey’s death in 1990
He passed away on May 23, 2002, in Hot Springs, Virginia following complications from a stroke, four days before his 90th birthday.
He was inducted posthumously, into the West Virginia Golf Hall of Fame, in 2009.
Trivia
This American golfer’s most famous quote was ‘Keep close count of your nickels and dimes, stay away from whiskey and never concede a putt’.
This famous professional golfer was fondly known as ‘Slammin’ Sammy’ for his ‘perfect swing’ in golf.
You May Like

See the events in life of Sam Snead in Chronological Order