Homer, hailed as the poet of ‘The Iliad’ and ‘The Odyssey’, the two great epics which laid the foundation of Greek literature, has unfortunately come down to us just as a name. In fact, many modern scholars are not convinced that there was actually a man named Homer. According them, these two epics were the works of a group of poet-singers, collectively known as Homer. Another group however, recognizes that there was indeed a poet named Homer, but he had only refined the stories and compiled them into the two epics. Contrarily, if we go by ancient Greek traditions, there was indeed a man called Homer, who composed the two great epics along with a number of verses collectively known as ‘Homeric Hymns.’ More importantly, inhabitants of several cities in the Asia Minor region, known as the “Homeridae” claimed that they were the direct descendents of the bard. Modern scholars have woven his life story as much from such ancient traditions as from certain elements in his works, and the little that we know about him is from their research. Sappho
Poets #14
Writers #48
DID WE MISS SOMEONE?
CLICK HERE AND TELL US
WE'LL MAKE SURE
THEY'RE HERE A.S.A.P
Quick Facts
Family:

Greek People
Greek Male
Male Poets
Greek Poets
Male Writers
Year of Birth
As Homer was born before the modern dating system was evolved, it is very hard to pinpoint his birth year. However, it is certain that Homer lived sometime between the twelfth and eighth century BC.
It is to be remembered that this was the period when the people of Ancient Greece did not have any script, having lost the Mycenaean scripts, but not yet acquiring the Phoenician alphabets. Since both the epics ascribed to Homer had been created in oral tradition, experts believe Homer must have lived sometime in this period.
Although there is no hard evidence to determine the exact year of his birth, different scholars have offered different theories. Herodotus, the ancient historian, who lived from 484 BC to 425 BC, placed Homer’s year of birth four centuries before his own, making it around 850 BC.
Then again, some modern scholars believe that Homer lived in the twelfth century B.C. when the War of Troy actually took place. The reason they site is that he could not have described the topography of the region in such details unless he himself had been there at that time.
For example, Homer writes that the sea-god Poseidon sitting on the highest peak of the island of Samothrace watched “the city of Priam and the ships of the Achaeans." Homer could not have written that just by following the maps because he would have found the view blocked by the island of Imbros.
It is only in the modern day that we find that indeed, the plain could be seen from the 5000 feet high peak of Samothrace over a notched shoulder of Imbros. Therefore, they argue, he must have climbed the peak and watched the ships and the city before he put Poseidon on it.
Moreover, there was no way Homer could have known that a prehistoric fortified citadel did exist at a site today known as Hissarlik before it was discovered by Heinrich Schliemann in the nineteenth century AD. Therefore, he must have lived in the twelfth century BC, to write in such great details about Troy.
Contrarily, by studying the style as well as the language of the poems, some other scholars have come to conclusion that he might have lived sometime in the eighth or ninth centuries B.C. Among them, many believe that Homer was born sometime around 750 BC. 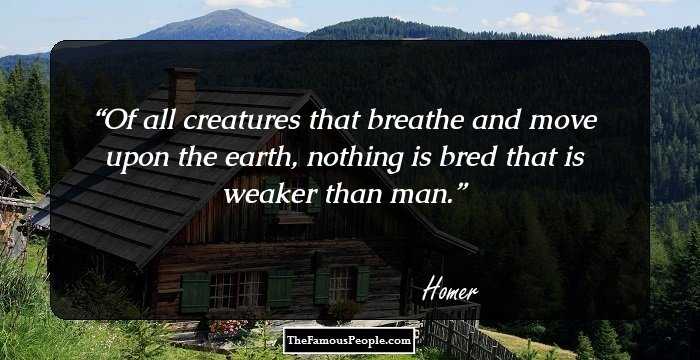 The Hottest Male Celebrities With The Best Abs
Place of Birth
Just as the year, there is much confusion about Homer’s place of birth as well. In ancient times, the inhabitants of seven different cities had claimed that he was born in their city. However, such claims have never been validated and no archeological remains have ever been found.
Scholars today believe that Homer must have resided in some part of Eastern Greece or Asia Minor. They have specially pinpointed three cities as his place of birth; Ionia, and an Aeolian settlement called Smyrna, both located in Asia Minor, and the Island of Chios, situated in the Aegean Sea, close to the Anatolian coast.
There are various reasons for such assumptions. For example, the dialect he had used was mainly Ionic, mixed with a little bit of Aeolic. Such Ionic-Aeolic mixture was mainly used in the border areas between Ionia and Aeolis and also in the island of Chios.
That apart, there are frequent mentions of strong winds blowing from the direction of Thrace in northwest in his works. This led to the belief that he might have come from one of these three cities.
At the same time, he had often been referred to as Melesigenes, son of Mele. Now, Mele is a river in Smyrna and it led many to believe that he was actually born in Smyrna.
Moreover, in around 6th century BC, a family believed to be Homer’s descendants was found to be living in Chios. Some however refer to it as an eponymous guild of bards, known as the Homeridae or the sons of Homer.
Whoever they might have been, the members not only claimed that the bard was their ancestor, but had also helped in preserving and propagating his works by religiously memorizing and reciting them. Because of it, the residents of Chios claimed that Homer came from their city.
Roman satirist Lucian had added another twist to this already complex subject, depicting Homer as a Babylonian named Tigranes. He goes on to say that it was Tigranes who took up the name Homer after he had been taken captive by the Greeks. 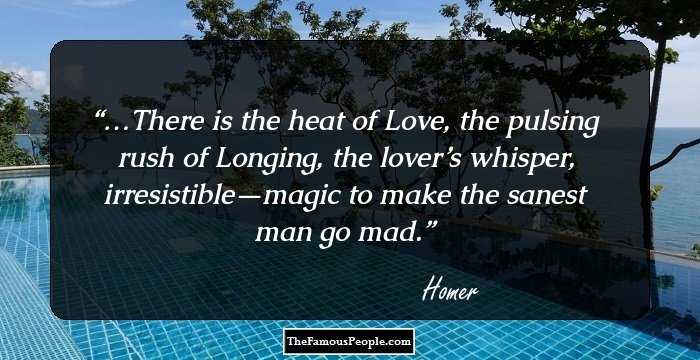 Quotes: Love
Continue Reading Below
About Homer
What little we know about the man himself has come down from his writings. Although he had successfully concealed himself in both the epics, in ‘The Odyssey’ he speaks about a blind bard, who according many scholars, is Homer himself.
In ‘the Odyssey’, the bard named Demodocus recounts the story of Troy to the shipwrecked Odysseus at the court of the Phaeacian king. If we go by the theory that Demodocus is actually Homer, we must accept that he was the son of Telemachus and Epikaste.
However, ‘The Life of Homer', written possibly in the 3rd or 4th century AD by somebody referred to as Pseudo Herodotus, tells a different story. Here it is claimed that Homer, whose original name was Melesigenes, was born out of a liaison between Cretheis of Argos and his ward, the daughter of Melanopus of Cyme in Aeolis.
Nonetheless, from Homer’s works, one can deduce that he must have come from an aristocratic family. The scholars have assumed this because none of his protagonists come from an ordinary background. Episodes such as the beating up of a commoner named Thersites also corroborate such beliefs.
Some biographers claim that he used to hang around with ordinary folks in the port towns though he was actually a court singer. However, if he did hang around in such places, it must have been to gather material for his works.
It is not known how or when Homer became blind. Many also doubt the theory that he was actually blind for he had depicted the landscapes as well as events much too precisely to have been able to do so without the help of eyesight. It has been suggested that he might have developed eye diseases later in life.
However, every biographer agrees on one fact; that he was a wandering minstrel, travelling from place to place, singing the stories of ‘The Iliad’ and ‘The Odyssey.’ It is said that, in course of his travelling, he met Hesiod, another ancient Greek poet, at the funeral games of Amphidamas, conducted by his son, Ganyctor.
Eventually, they agreed to take part in the contest of wit. Unable to decide, the judge asked them to recite poems. While Homer quoted from ‘The Iliad’ Hesiod recited from his ‘Works and Days.’ It is said that the judge declared Hesiod the winner because he had talked about peace while Homer’s poem was about war.
There is an interesting though unverified story about Homer’s death. According to legends quoted by the 5th century BC biographer and Pre-Socratic philosopher Heracleitus of Ephesus, some boys asked Homer a riddle about catching lice. Not being able to solve that, he died out of desperation.
Major Works
Homer is no doubt best remembered for the two great epics, ‘Iliad’ and ‘Odyssey.’ However, because of the differences in their styles of composition many suspected that they were authored by two different persons. However, after further scrutiny, it was found that the author of the two epics was the same.
It was later assumed that Homer had composed ‘Iliad’ when he was still young while ‘Odyssey’ was composed in his old age. Most scholars also agree that, initially created orally, both the epics had undergone changes and refinement by subsequent bards and hence the differences. 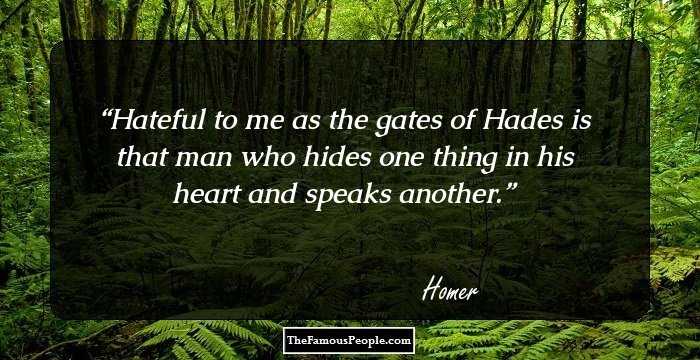 Quotes: Me, Heart
Trivia
Among the scholars, the debate over the identity of Homer and the authorship of the two epics ‘Iliad’ and ‘Odyssey’ is now being referred to as the ‘Homeric Question.’ The debate has its root in the Hellenistic period in early fourth century BC, but has flourished in the nineteenth and twentieth century AD.
You May Like

See the events in life of Homer in Chronological Order 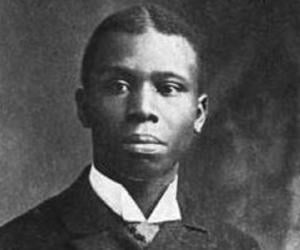