Advanced Search
Ben Hogan was an iconic golf player and is often named along with other big guns in the world of golf including, Tiger Woods, Walter Hagen and Jack Nicklaus. He is believed to be one of the greatest players in the history of the game and is remembered for his ‘golf swing theory’ and his ball-striking skills. During the course of his career, he authored a golf tutorial, ‘Five Lessons: The Modern Fundamentals of Golf’, which is still extensively read by budding golfers and professionals. A sturdy perfectionist, he was a man with an iron-will whose influence on the sport was reflective and his legacy was across-the-board. At the apex of his golf career, he won nine major championships—two Masters, one British Open, four United States Opens and two P.G.A. championships - being one of the five golfers to have ever done so in the history of golf. Despite a major accident that almost took his life, his comeback was a heroic one, with all his fans reveling with joy over his return. He was the proud recipient of a number of distinctions and honors and was known for his superb golf course management skills that could put even his severest opponents into an acquiescent zone. Jack Nicklaus
DID WE MISS SOMEONE?
CLICK HERE AND TELL US
WE'LL MAKE SURE
THEY'RE HERE A.S.A.P
Quick Facts

place of death: Fort Worth

American Celebrities
University Of Oregon
Male Golfers
American Golfers
Male Sportspersons
Childhood & Early Life
William Ben Hogan was the youngest child born to Chester and Clara Hogan, in Stephenville, Texas. The family moved to Fort Worth where they incurred numerous financial difficulties.
When Hogan was just 9-years-old, his father committed suicide with a self-inflicted chest gunshot. It is believed that his father died right before his eyes, which is often cited as the reason behind his introverted personality in his later years.
In order to make ends meet, he and his elder brother, Royal, quit school and began working a number of odd jobs. It was during this time he began to caddy at Glen Garden Country Club and his interest for golf was triggered.
In 1927, when he was 15-years-old, he and his opponent, Byron Nelson tied for the top at the annual Christmas caddy tournament. 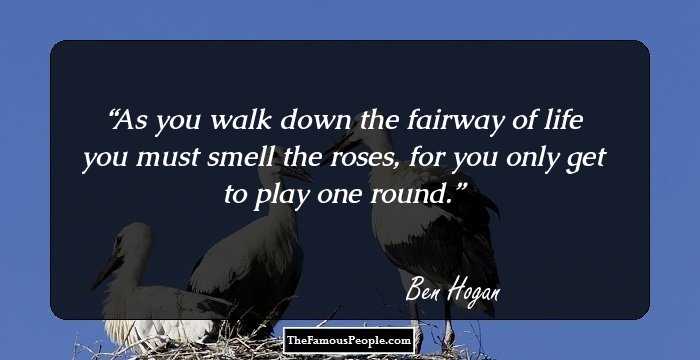 Quotes: You, Life
Continue Reading Below
Career
He dropped out of Central High School and began to focus his energies on playing golf professionally, debuting at the Texas Open in San Antonio, in 1930 at the age of 17, notwithstanding a terrible hook.
He participated in his first P.G.A. Tour in the 1932 Los Angeles Open, where he finished 38th and won $.8.50.
In 1938, he was hired by Century Country Club in Purchase, New York as an assistant pro and later became a head pro. In 1941, he was offered a head job at the Hershey Country Club in Pennsylvania, which he could not decline.
Till March 1940, he had played a number of pro tournaments but without much success, but after that he won three successive tournaments in North Carolina.
Success soon followed and he became a professional at the game owing to a technique he fondly called his, ‘secret’. His ‘secret’ allowed him to hit a power draw which he could control, by abating his left grip and swaying his arm in a clock-like motion.
From 1943 to 1945, his career was interrupted by a call for military service at the World War II. He served as a utility pilot in the U.S. Army Air Force and was stationed at Fort Worth, Texas.
Due to World War II, he missed a couple of years of golf. However, he returned full-time to the sport in 1946, during the P.G.A championship, which he won. Two years later, he won the championship yet again.
From August 1945 to February 1949, Hogan had won 37 times. However, a fatal car collision in 1949 jolted his career off balance, paralyzing him for sixteen months after the accident.
Despite the doctors mentioning that he would never be able to play again, he was more determined than ever to return to the sport; and so he did, during the 1950 U.S. Open. Not only did he participate in the event, but he won it, playing 36 holes on the final day, despite severe pain.
Continue Reading Below
From 1950 onwards, he decided to play just seven PGA Tour events in a single year and won 13 more tournaments, including 6 majors. Until Tiger Woods broke his record in the new millennium, Hogan was the only man to win three professional majors in a year.
In 1951, he entered five tournaments, winning three of them including the World Championship of Golf, the U.S. Open and the Masters.
In 1953, he won the Masters, the U.S. Open and the British Open, being the only golfer in history to win all three in the same year. He was meant to participate in the PGA Championship as well, but could not as the dates clashed with those of the British Open.
During fall the same year, he started his own golf business called, the ‘Ben Hogan Golf Company’ at Fort Worth. In 1957, he authored the instructional golf guide, ‘Five Lessons: The Modern Fundamentals of Golf’, which became a didactic success.
In 1960, he sold the company to American Machine and Foundry (AMF), but stayed on as the chairman. The company was then sold to Cosmo World of Japan, Bill Goodwin, Spalding and then Callaway Golf, before being discontinued.
In 1967, Hogan shot a best 30 on the back nine at the Masters before retiring officially, four years later.
Awards & Achievements
He won the Vardon Trophy three times for the lowest average score in 1940, 1941 and 1948.
In 1974, he was inducted into the ‘World Golf Hall of Fame’.
In 1976, he was honored with the ‘Bob Jones Award’, which is one of the highest distinctions conferred by the United States Golf Association for sportsmanship in golf.
Continue Reading Below
He is featured at no. 38 in ESPN’s list of ‘SportsCentury 50 Greatest Athletes of the 20th Century’, in 1999.
In 2000, he was ranked the ‘second greatest player of all time’ by Golf Digest magazine.
Personal Life & Legacy
He married Valerie Fox in April 1935. He met her during Sunday school in Fort Worth and was then re-acquainted with her during his club pro job.
The couple survived a fatal head-on collision with a bus on February 2, 1949. In order to save his wife, he threw himself across his wife to protect her, which in turn, saved his life as well. Had he not moved from his seat to protect her, the steering column would have punctured his chest.
The accident left him paralyzed for several months with doctors stating that he would never be able to walk, let alone get back to the game. However, he was discharged from the hospital 59 days after the accident and he stunned all his fans when he made a comeback.
He passed away in Fort Worth, Texas after suffering from poor health since a surgery for colon cancer.
His legacy is extensive. A biopic on Hogan’s life titled, ‘Follow the Sun: The Ben Hogan Story’ was released, where Glenn Ford portrayed Hogan.
A special room is dedicated to Hogan’s career, comeback and accomplishments at the United States Golf Association Museum and Arnold Palmer Center for Golf History.
When he was alive, he helped design the original plans for the Trophy Club Country Club Golfcourse and 9 of the 18 holes there are known as the ‘Hogan’ course.
Apart from this, there are also two Ben Hogan Awards in golf, one which is presented to a college golfer and another award presented to any golfer who overcomes any handicap or damage to get back to the sport.
Trivia
This famous American golfer, who was regarded as one of the ‘best ball-strikers’, played and practiced the sport without wearing any glove, unlike the other players of the time.

See the events in life of Ben Hogan in Chronological Order